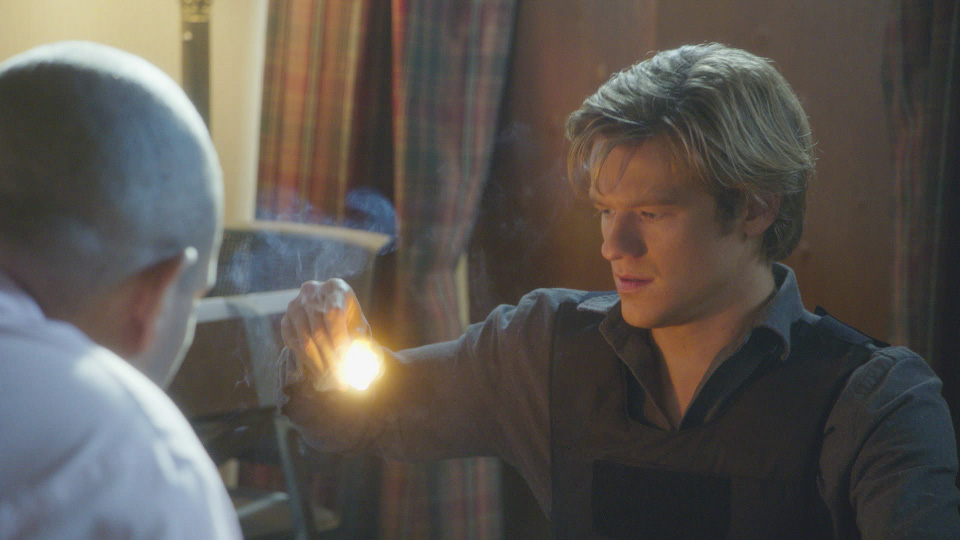 On the latest episode of MacGyver, Mac (Lucas Till) found himself face to face with an international assassin who was hired to kill him.

The episode opened up with Mac on a date at an escape room. After realising they needed a black light, Mac decided it would be quicker to make one than to find the one hidden in the room. He used an old floppy disk with the light on his phone to find the hidden clues.

Back at Phoenix HQ, Thornton (Sandrine Holt) explained their next mission was to track down a super assassin known as S-218. Mac, Jack (George Eads) and Riley (Tristin Mays) went after him but he escaped. He left behind a photo of his next target – Mac.

Thornton decided to put Mac in a special safe room to prevent the assassin getting to him. Even without his trusty Swiss Army knife, Mac was able to bypass the security and let himself out.

Meanwhile, the assassin went to visit Mac’s flatmate Bozer (Justin Hires). He told him they worked together and as Bozer was in the dark about the the true identities of Mac, Jack and Riley he let him in. Mac and the team came to the rescue and Bozer was upset to learn that Mac had been lying to him for years about where he worked.

A shootout at the apartment left Jack, the only one with a gun, without ammo. Ever resourceful, Mac cobbled together a wine bottle launcher that he used to knock the assassin through the window.

Eventually the assassin set a trap in a scrapyard. He had the team cornered with auto-sentry guns. Mac turned up and saved the day by shutting down the transmitter allowing Riley to hack the guns.

After being caught, the assassin revealed his name to be Murdoc. In the original TV series, Murdoc was Magyver’s nemesis so I’d be surprised if we don’t see him in future episodes.

At the end of the episode, Nikki (Tracy Spiridakos) showed up at a diner where Mac was eating. She held a gun on Mac and told him that the people she works for ordered the hit on him. She also advised he stay low as they wouldn’t give up. Mac threatened her family in return before she left along with her support team.

The next episode is Chisel, the official synopsis for the episode reads:

With only a chisel and matchbook, MacGyver and team must defend themselves the U.S. embassy workers in Latvia from extremists who are attempting to retrieve their leader. Also, Bozer faces a big decision now that he knows who Mac really is.