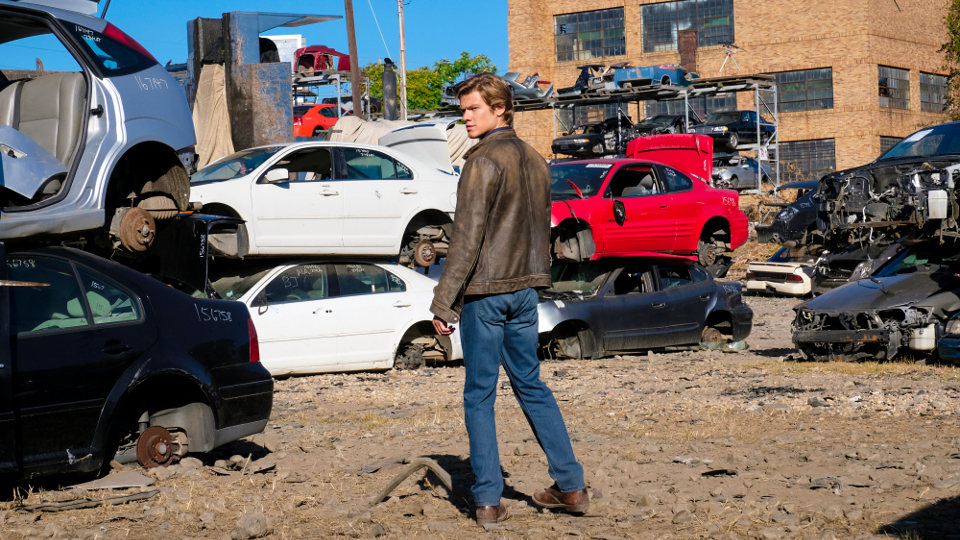 On the latest episode of MacGyver, Mac (Lucas Till) found himself in prison.

The episode opened up with Mac and Jack (George Eads) chasing down a suspect through a shipping yard. They were struggling to catch him so they split up. Mac created a trap using petrol to make a circle on the floor and then had Jack shoot it to ignite capturing the man inside.

The main case revolved around El Noche, the leader of a Mexican drug cartel, who was in prison in Texas. Due to him being out of the way other cartel members had taken over and were causing problems such as violence in public. The problem was that no one knew where their hideout was.

Thornton (Sandrine Holt) came up with a plan that involved breaking El Noche out of prison. To do that she decided it was best to send Mac inside as an inmate. Mac’s job was to befriend him and then escape with him. Once out they hoped he would lead them to the hideout.

To help Mac, they got Jack a job as a prison guard and Riley (Tristin Mays) was going to monitor the surveillance cameras then open doors as needed. Unfortunately this part of the plan backfired when a security upgrade locked her out of the system.

The whole attempt was difficult for Riley because it brought back memories of her 2 years inside. Knowing how tough it was inside she was really nervous for Mac. Before he went in she identified the best inmates for Mac to get involved with.

Once inside Mac took a bit of time to get used to things. He tried to befriend an older inmate who was struggling with an asthma inhaler. The nozzle had broken but Mac fixed it using the end of a plastic fork.

Next he picked a fight with the biggest guy there who wasn’t liked by anyone. This attracted attention to him but he also had to take quite a beating. Meanwhile, Jack was able to change the work order spreadsheet to get Mac into the same cleaning detail as El Noche.

Mac approached him with a deal. He wanted $2 million and a house in Mexico for getting him out. El Noche agreed and Mac also helped him fight off a rival gang. Later El Noche called in the last of his favours with the guards to get put in a cell with Mac.

Mac used pages from books to block the window and vents into the room. Next he used salt with the toilet water and a battery stolen from a walkie talkie to split the oxygen and hydrogen molecules. The hydrogen rose to the top of the room and then Mac dentonated it using the lights which blew the door off the cell.

Jack created a diversion to keep most of the guards occupied. Only one stood in Mac’s way and El Noche wanted to kill him. Mac refused and knocked the guard out. They then headed to the laundry room where Mac had prepared some rope made from sheets.

Mac used a paper click to dismantle some shelves which he then rebuild as a ladder. he then used a fire extinguisher with a large bin and some alcohol to create a mixture. He applied this to the bars on one of the windows which allowed him to break them.

Once outside he tied the ropes to make it look like they had climbed down into the yard. He then used the ladder to get them onto the roof and escape out of the prison. Once in the woods El Noche signaled his men.

Instead of honoring his deal he took Mac prisoner because he was suspicious that he stopped him killing the guard. Mac was bundled into a car boot and they drove to the hideout. On the way Mac used one of the rear lights to tap out Jacks mobile number in morse code in the hope someone would see it.

At the hideout El Noche began to torture Mac using nitrogen. He wanted to know who Mac worked for. Fortunately Mac’s signal had been spotted so Jack and the team came to the rescue. Before Jack arrived Mac managed to take out most of the men by knocking a nitrogen canister over which flew around the room.

Elsewhere in the episode, Bozer (Justin Hires) helped Riley secure a new apartment. For his troubles she gave him another digit of her phone number.

At the end of the episode, Mac paid a visit to El Noche who had put a $4 million price on his head. As they left the prison Jack couldn’t help himself and made a reference to the Shawshank Redemption.

The next episode is Corkscrew, the official synopsis for the episode reads:

When MacGyver comes face to face with Murdoc, an international assassin hired to kill him, Mac must defend both himself and Bozer, armed with only a corkscrew and paper towel rolls. Also, Bozer feels completely betrayed when he finally learns Mac’s true identity.