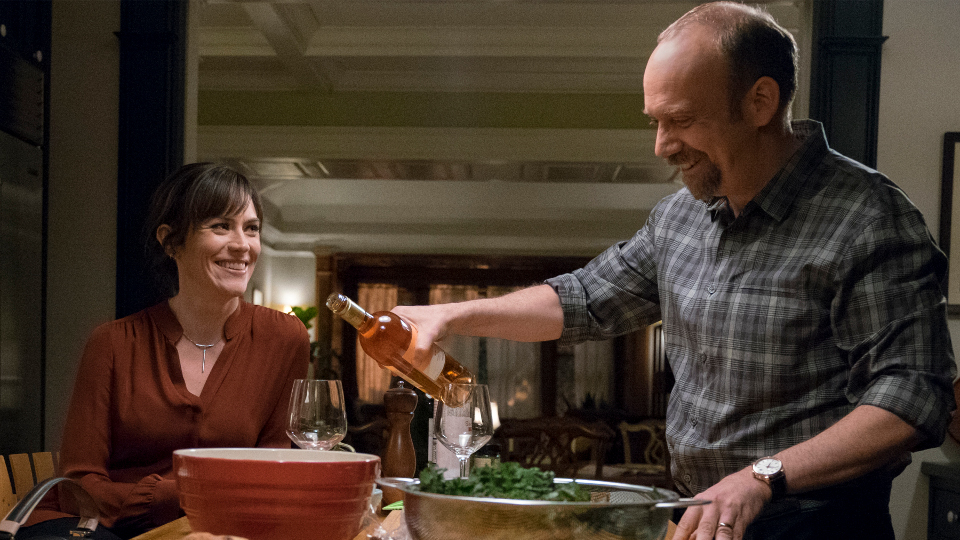 On the latest episode of Billions, Axe Captial was facing it’s first down quarter which just wouldn’t do for Bobby “Axe” Axelrod (Damien Lewis).

The episode began with Wags (David Costabile) coming in to see Axe. It appeared he hadn’t been in the office for a period of time. Before he got chance to speak Axe told him it wasn’t his turn to talk and then the action jumped backwards 48hrs.

The reason for Axe Capital losing so much money was a company called Sansomic. Their new super thin phone had issues with its glass during manufacturing forcing a huge recall. The guy in charge of the phone leapt to his death.

Axe called an emergency company meeting and demanded that someone come up with a brilliant idea to turn things around. He said no one would be allowed to leave until they had fixed things. Before the meeting finished he shot down the few initial suggestions.

The only person with a decent idea was Maffee (Dan Soder) but he decided not to tell Axe. He was afraid if he did that the guy who gave him the idea would be recruited to replace him. Axe still found out about the idea though when Deb (Ilfenesh Hadera) came to him with it. She had overheard him talking about it.

Axe confronted Maffee and he gave in and explained what he knew. He had a friend called Everett who knew more and Axe met with him. It was a risky plan that involved Nigeria devaluing their currency. What Axe needed was other investors to come in with huge amounts of cash to make it happen.

Axe reached out to Krakow (Danny Strong), Malverne (Dennis Boutsikaris) and Birch (Jerry O’Connell). He gave them the brief and then left them with Everett to fill them in on the detail. They all agreed to go in at a cost of $5 billion combined.

Unfortunately for Axe, Birch leaked the info which allowed the banks to take action. He decided to leak it to get back at Axe for screwing him over in the past. Axe isn’t one to give up though so he convinced Krakow and Malverne to stay and make it work.

The episode then went back to where it started with Wags. He’d been in therapy with Wendy (Maggie Siff) who had succeeded in helping him get himself back together. She had helped him realise that a big part of his problem was Steph. Since Axe hired her he had felt useless.

While his intention was to quit, Wags discovered that Axe had decided to let Steph go. Axe needed him and Wags looked like his old self again.

Elsewhere in the episode, Chuck Rhoades (Paul Giamatti) and Wendy continued their therapy. Things didn’t look good and Wendy complained about how Chuck always wears his suit to let people know he’s a top lawyer. She was surprised when he explained that he did so because he felt it would lessen how much people would wonder why Wendy was with him.

At the end of the episode, Axe and Boyd went to appear on a TV show to talk about the Nigerian currency. Having Boyd talk about it would back Axe up and keep his plan on track.

Before going on, Axe took a call that let him know the FBI were coming for Boyd. He had a chance to tell him but knew if he did that he wouldn’t do the appearance so he kept quiet.

As Boyd finished his interview, Axe told him the news. Chuck then walked in and arrested Boyd setting up the next clash between he and Axe.

Watch the Billions 2×06 trailer below:

The official synopsis for Billions 2×06 reads:

Axe negotiates with a reluctant seller. Wendy makes a professional decision that adds further conflict to her relationship with Chuck.