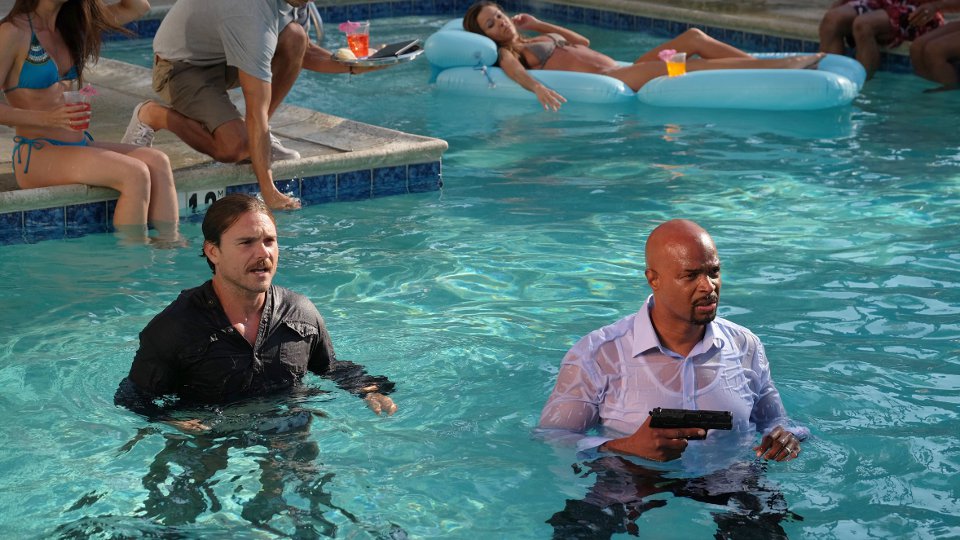 On the latest episode of Lethal Weapon, Riggs (Clayne Crawford) and Murtaugh (Damon Wayans) investigated a series of burglaries.

At the start of the episode, Riggs was washing his clothes using a shower on the beach. Dr. Cahill (Jordana Brewster) happened to be there, out for a surf, and popped over to tell him he looked homeless.

Riggs went to meet Murtaugh and asked Trish (Keesha Sharp) if he looked homeless and she said no but he did look a bit rough sometimes.

The duo were called to a robbery in Murtaugh’s neighborhood. They gave chase to a van which ended up crashing through a large garage door. The burglars then fled via motorbike. The robbery matched several others in the area and they tried to work out the link.

One of their leads led them to a huge black guy who Murtaugh described as the Black Hulk. They decided to go to his gym to talk with him. They found him in the showers and asked he get dressed so they could speak.

Instead of complying he challenged the pair which led to the most hilarious take down scene in recent memory. Riggs and Murtaugh ended up in the showers with the naked Black Hulk. As he knocked them about Murtaugh tried to taser him several times. In the end Riggs found his head stuck between the Black Hulk’s thighs before punching him hard in the crotch. Murtaugh was able to taser him properly as he went down in pain and they arrested him.

Another suspect turned up when they went to visit the Black Hulk’s old basketball coach. He ran off but the pair gave chase, before Riggs tackled him to the ground.

Meanwhile, Murtaugh’s son, RJ, went for a drive with an old friend called Marcus. He then let RJ drive a Porsche but he was pulled over for speeding. RJ got them out of the situation by flashing his Dad’s credentials.

His friend then got a call and left RJ alone as he had to be somewhere. As he was not supposed to be out, RJ called Riggs for help and got him to pick him up and take him home. Riggs reluctantly agreed and took the opportunity to give him some advice on the way home.

At the precinct, Murtaugh was approached by the officer who pulled his son over to tell him what happened. He called home to talk to Trish and she explained that Riggs had brought him home. Murtaugh was furious and Riggs ended up with a smack in the face over the situation.

Later, while Bailey (Michelle Mitchenor) and Cruz (Richard Cabral) were processing the suspect from the basketball game, a text message gave the same address of an in-progress emergency call.

The call came in from a woman who was home while her home was being raided. Riggs was patched into her call and he told her to stay hidden in the closet. She refused to listen and tried to make a run for it but ended up getting shot and killed.

Eventually Murtaugh solved the link between the burglaries, they all used the same valet service. Cruz investigated and discovered that it was the Coach who owned the valet service

Realising RJ’s friend Marcus works for the valet service they tried to contact him but failed. He had been kidnapped by the burglary gang and forced to take part in the latest heist. During which the owners came home so the gang tried to force Marcus to shoot them. Fortunately Riggs and Murtaugh arrived in time to stop them.

At the end of the episode, Captain Avery (Kevin Rahm) sent Riggs and Murtaugh to speak with Dr. Cahill. They did as instructed but she kicked them out when they wouldn’t take the session seriously.

Watch the trailer for Lethal Weapon 1×05 Spilt Milk below:

Murtaugh delves deep into the psyche of a former navy seal who is wanted for criminal activity, and draws parallels between him and his partner, Riggs, who also served in the military. Riggs’ connection to the suspect threatens to interfere with the case, but it also forces him to open up to Murtaugh.