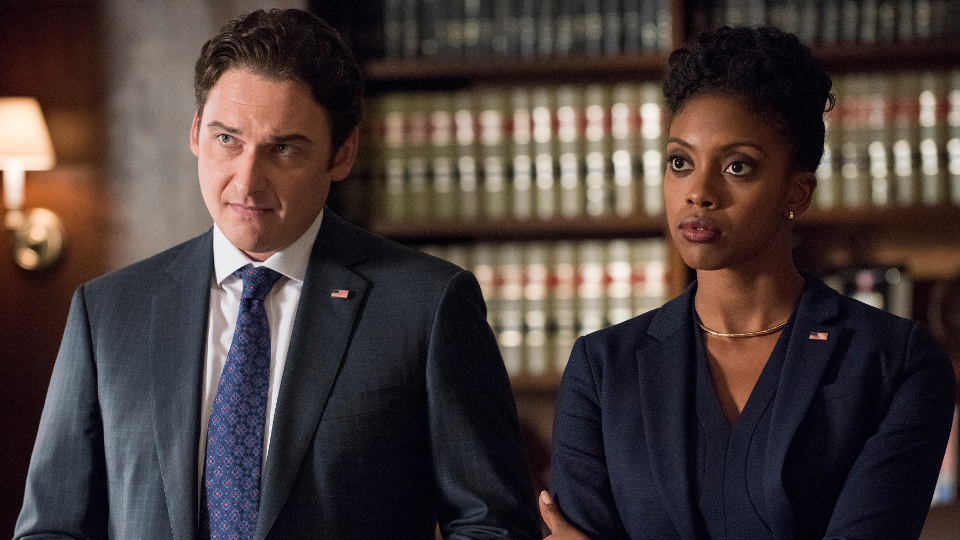 Axe also continued to think about how to take down Chuck Rhoades (Paul Giamatti) but his fixer Hall (Terry Kinney) explained that Chuck wasn’t currently exploitable.

Not to worry, Axe has a new nemesis to keep him busy in the form of rival hedge-fund manager Todd Krakow (Danny Strong). This season Axe has already lost it with Krakow in a debate and was upset when he tried to poach Wendy (Maggie Siff).

This episode Krakow was getting excited for the upcoming Alpha Cup Charity Poker Tournament. He’s won it three years in a row, with Axe failing to beat him each time. This year Krakow managed to hire Wendy to be his coach in a further attempt to unsettle Axe.

Wendy gave Axe the heads up but he was still furious about the whole situation. Instead of taking Dollar Bill Stearn (Kelly AuCoin) as his usual partner, Axe decided he needed someone different to give him an edge.

Axe picked Taylor (Asia Kate Dillon) but they revealed that they would prefer not to play. Despite previous being fantastic at poker online they didn’t like winning against real people. After explaining their reasons, Taylor realised that Axe was already aware and pointed it out to Axe who seemed impressed.

Axe arranged a session for Taylor with Dr. Gus (Marc Kudisch) who has a unique way of getting his points across. Taylor pointed out that they had aready had over 900 hours of therapy but Dr. Gus said he’d had plenty more himself. The talk surprised Taylor as they found it useful. When Axe later calls to demand Taylor plays they reluctantly agreed.

Meanwhile, Chuck and Wendy attended their own therapy session about their marriage. Chuck talked about how their son had come to him to ask about their vows and wanted him to promise to never leave him. Wendy told him he was a good father and he repaid the compliment.

Chuck was still hopeful they would get back together but Wendy said it was time he got his own place. Chuck is against the whole idea but agreed. He later had to sell a prized set of first edition books by Winston Churchill. They were signed by the man himself but he had to let them go as he needed the $40,000 they were worth.

After deciding last episode to go after Lawrence Boyd (Eric Bogosian), Chuck’s team struggled to find anything the could use against him. The only suggestion came from Kate (Condola Rashad) who had information on a flight attendant from Boyd’s private jet.

Bryan (Toby Leonard Moore) wasn’t keen on the plan but he went along with it. They brought the woman in and Kate started out as the bad cop before leaving her with Bryan to play good cop. She agreed to help him and later flirted with him several times, especially when asking him to strap a wire to her upper thigh.

During the flight she was able to record and film Boyd having sex with a colleague’s wife. Chuck and his team later showed the video the the wife’s husband to get him on side to take down Boyd.

Back to the poker tournament Axe went up against Krakow and lost. That left only Taylor to take down Krakow. Confident, Axe bet $1 million that they’d outlast Krakow. At the final game, Krakow was rather obnoxious toward Taylor but they absolutely destroyed him and took the trophy.

The next day in the office everyone gave a standing ovation to Taylor and wanted to fist-bump or shake their hand. Taylor was annoyed that Axe had used them to break Krakow in front of Wendy.

At the end of the episode, Axe bought the books that Chuck had sold. He then requested that every single first edition be tracked down and bought as well. He laughed off how expensive that was going to be.

Watch the Billions 2×04 trailer below:

The official synopsis for Billions 2×04 reads:

Chuck develops a new strategy when his case stalls; Wendy helps a tech billionaire assess a candidate for a special project; Axe considers pledging half his net worth to charity; Lara’s business faces a rival; Axe and Chuck find themselves in a room together for the first time since their face-off.