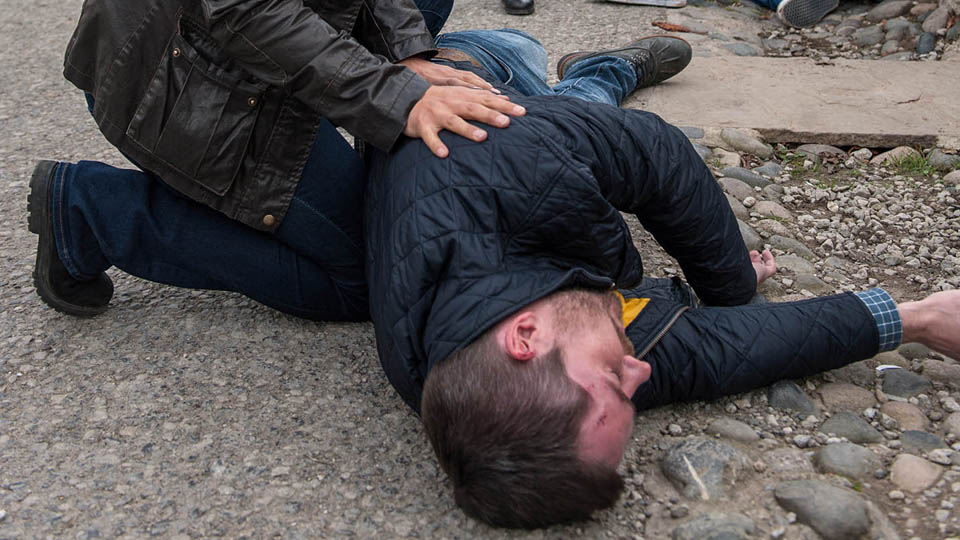 It’s time to look ahead to what’s happening in Emmerdale this week and everyone is concerned about Moira, it’s like old times for Lisa and Zak and we get to see the world through Ashley’s eyes in a special episode on Tuesday.

A drunken Moira mows down Pete

Moira’s heavy drinking hasn’t gone unnoticed.  Pete reminds her of a meeting they have the next day, even writing the details on a napkin, but will a tipsy Moira remember?  It seems not.  Next day she is late for the meeting, leaving Pete to cover with buyer, Patrick.  Finn suggests he drives her to the meeting as she’s still over the limit.  When she arrives, Patrick is less than impressed by her as it’s clear she’s hungover and ill prepared.

After the meeting Moira confides in Pete and they end up kissing, nearly getting caught by Leyla who arrives to rekindle things with Pete.  It’s clear that Leyla doesn’t want Pete wasting any time on his Auntie Moira and wants him to focus on her.  Later, in The Woolpack, Moira’s drinking once again and has a go at Pete, leaving Leyla to stand up for him.  She may wish she hadn’t bothered when she learns that the pair have kissed.  Moira recklessly heads out and gets in the van despite Cain trying to stop her and there’s disastrous results; she knocks Pete down.

Pete had stepped in to push Jacob out of the way and took the full brunt of the van himself.  When Emma and Leyla appear and ask what’s happened, Cain takes the blame.  As an unconscious Pete is taken to the hospital with Emma, Moira is riddled with guilt.

Later, Jacob suddenly collapses much to the shock of Leyla and Tracy who whisk him off to the hospital.  Soon the police arrive and asking questions; Cain has a choice to make.  Moira hits the bottle and Cain finds her trashing the farm and the pair argue.  Is there really no chance their relationship can’t be saved?

See the world through Ashley’s eyes…

Things are going down hill rapidly for Ashley and at the hospital he gets confused and angry when he sees Laurel being comforted by Marlon and accuses them of having an affair.  Laurel is broken and leaves Ashley with Diane only for him to give her the slip.  We are then given an insight into Ashley’s world as he leaves the hospital and takes to the streets.

Meanwhile, Doug pleads with Laurel to take on a full time carer for Ashley but she’s defiant that she’s not ready to do that yet.  It seems that she may reconsider after a conversation with an unlikely confident; Aaron.

Unfortunately, the rest of the family don’t seem to take too kindly to the news that she’s considering a carer with Gabby feeling like Laurel’s given up on her dad.  On the good news front, Laurel is surprised to see a Christmas tree has been put up, but doesn’t know how it got there?

Dingle all the way…

Lisa volunteers to be Mrs Claus and suggests that Zak take the role of Mr Claus so he can save some money for his new house.  As everyone at the factory excitedly awaits the arrival of Santa, Lisa realises that Zak hasn’t told Joanie about his new role and is far from impressed.

It seems the Christmas spirit is flowing through Zak’s veins as he suggests that he get Lisa a Christmas tree from Home Farm, just like the good old days.  Lisa goes with him and the pair reminisce about the trouble they used to get in to.

Lisa hears a noise and pulls Zak to the ground for cover and although it’s a false alarm, they find themselves inches apart and it’s clear the chemistry they once had is still bubbling under the surface.

Finn confides to Tracy that he might be no good in the sack but will they even get that far when Finn suggests Kasim spend Christmas with the Barton clan?  Is he moving too quickly?

Jimmy and Bernice are both trying to make things up with Nicola.  Jimmy buys a gift and thinks he’s on to a winner but is soon anxious at the reactions of others over his choice.  Just what has he bought her?

Leyla chats to David and even extends the olive branch to Tracy but is ignored.  David insists he and Tracy are solid, then feels terrible when Leyla tells him Tracy was crying into the wedding album.