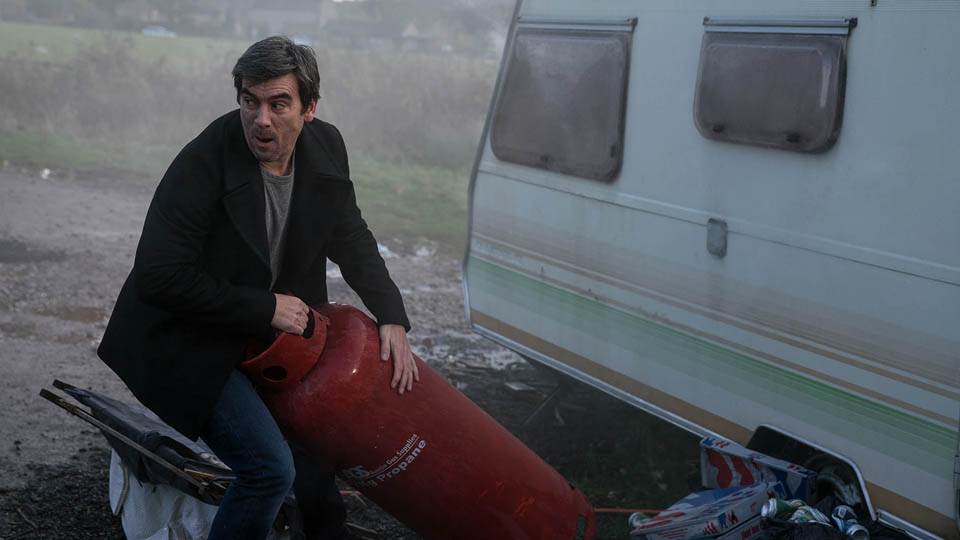 Happy New Year!  Hope it was a good one for you, but what does 2017 bring for residents of our favourite village?  It’s an explosive start for Zak, surprising for Aaron and

Zak is feeling under the weather and doses himself up in the caravan.  Meanwhile, Kerry persuades Belle to leave her and Kyle alone but when Cain finds out he’s furious and whips Kyle away from her.  Kerry turns to the pub and Charity to air her woes and a vengeful Charity spikes her drink and persuades her to trash Cain’s caravan.  Kerry seems to have taken the bait and heads off on a mission unaware that a spaced out Zak might be fast asleep inside.  Lisa finds the caravan on fire and panics to think that Zak is inside.  Cain arrives just as Lisa is about to enter the caravan and a wall of flames!

Cain is unconvinced that the caravan fire was started by Zak leaving on the hob and Kerry confesses to Zak it was her who started the fire.  Will Zak cover for her or will she face a backlash and will Zak get his wish of Lisa back in his arms?

Kerry takes Kyle out for a walk but as she gets to the footbridge she fears she’s going to pass out and calls out for Kyle to stay away from the water as she drops to the floor.  At the café, Zak and Cain are surprised to see Kyle and soon jump to the conclusion that Kerry must’ve been drunk.  Zak tells Cain it was Kerry who set fire to the caravan.

When Dan hears the news he goes looking for Kerry who is found on the verge of hypothermia.  Later, Cain bans Kerry from seeing Kyle leaving Dan, Lisa and Moira fighting her corner but this is Cain we’re talking about and soon his fists are doing the talking…

Robert is caught with Rebecca

Robert seems disinterested when Chas asks him about plans for Aaron’s birthday.  He heads off to Home Farm and tells Rebecca that all the secret meetings and sneaking around will be coming to an end soon.

Aaron is suspicious when Robert sneaks out to work rather than celebrating his birthday and is further worried when he learns Robert has gone to meet Rebecca.  Later, Liv sees Robert and Rebecca together and soon Aaron is heading to confront Rebecca.

Meanwhile, Robert is all dressed up and ready to surprise Aaron but how will it go down with Aaron?

Pierce starts the week talking on the phone about engagement rings, is he planning to propose to Rhona?  He certainly is!  As he makes a long speech though, Rhona panics and laughs leaving him shocked when she rejects him, telling him it’s too soon.  He pretends he’s fine with her answer but is later clearly upset when Paddy congratulates them and he has to explain she said no.  Back at home, Rhona is not in the mood but Pierce doesn’t seem to want to take no for an answer.

Next morning, Rhona is having serious doubts about her relationship.

Chas plan to seduce Paddy don’t go to plan when a gerbil escapes and Chas ends up accidentally hitting him in the mouth instead!  Later, the pair go on a date and Paddy uses a line he previously heard Ross use on Rebecca;  Chas is far from impressed.

Megan is on edge as she takes Eliza to the physio with Jai and ends up crashing into the car in front.  What has made her so tense?

Chrissie’s upset Lachlan has been beaten up at the Young Offenders Institution and assures him when he comes home he’ll want for nothing. But is the situation as it seems or is she being taken for a fool?

Under pressure from Emma, Kasim tells Finn that he’s getting back with his ex; a lie to try to soften the blow.  Finn blames Emma and Tracy is worried when she finds him texting Kasim.

Pearl accuses StepLiv of stealing her money, but Gabby steps in.