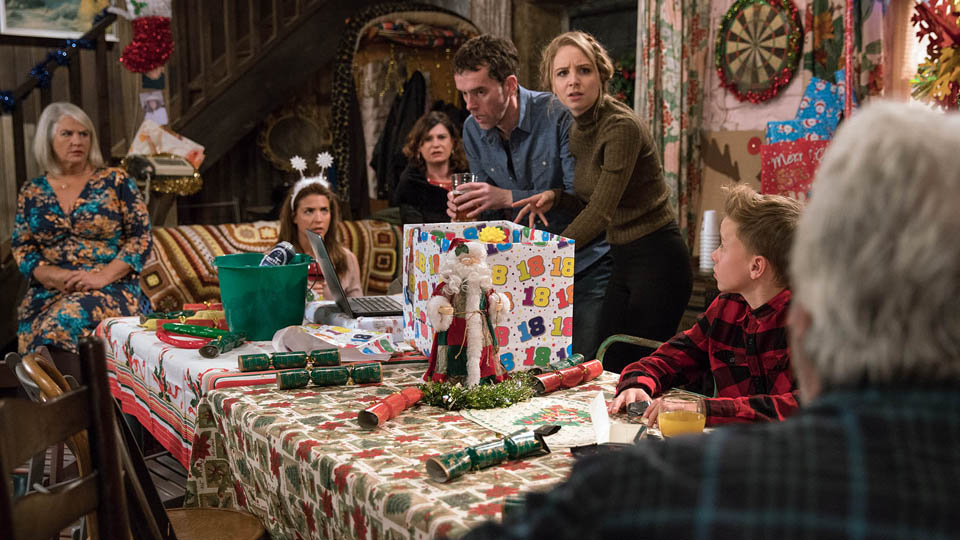 Merry Christmas!  As you sit surrounded by wrapping paper, mince pies and turkey galore why not read about what the residents of Emmerdale will be up to this festive week?

Could Zak and Lisa get back together, will Emma and Finn scare off Kasim and who got Nicola a new necklace?

Belle reveals she knows that Lisa and Zak stole the tree together and sees how much Lisa enjoyed spending time with him.  As Zak and Joanie arrive to wish Belle a happy birthday, Joanie is soon aware how at home Zak is with a Dingle Christmas.  Belle is pleased with her laptop present and sees there’s already a video recording on it, which she plays to everyone;  she doesn’t know it’s Zak telling Lisa he doesn’t want to move to Leeds.  Joanie slips out of the house, hurt by what she’s heard.  Will Zak follow her?

An awkward Zak visits Joanie and she tells him bluntly the two of them can’t be friends, not even for Kyle’s benefit.  Joanie takes drastic action and disappears.

Knowing that Kerry will still be in touch with Joanie, Liv sneaks her phone and has soon got Joanie’s details for Cain.  Lisa suggests she go and talk to her rather than Cain and insists that they need to talk about Kyle.   She pleads with Joanie to return to the village so Kyle can be with his dad, Cain.

It looks like she may have gotten through to her as she arrives back in the village and Cain scoops Kyle into his arms.  However, soon Joanie is laying down the law with Cain about his relationship with Kyle.

Later, a defiant Joanie attends a singles night along with Rishi, Kerry and Dan.  Kerry is determined to make sure no one else gets their hands on Dan and also wants to make him jealous so flirts with Tommy.  In true style she gets drunk and makes a fool of herself ending up being carried out by Tommy to his van, who thinks he’s on a promise.  A concerned Joanie follows them and soon has taken matters into her own hands.

Nicola gets a mysterious necklace

There’s a mystery in the King household when Nicola has a new necklace and neither Bernice, Dan or Jimmy know where it came from.  Soon Jimmy has figured it out when Elliot makes an admission;  he stole it.  Jimmy tells him they have to give it back but is worried how Nicola will react.  He later spots an opportunity to return it but fails miserably and the accusations fly, landing Jimmy in a lot of trouble.

Jimmy and Nicola are at each other’s throats and the kids are stuck in the middle and have soon disappeared  – what are they up to?  It doesn’t take long til Nicola is let in on what they’ve been planning…

Kasim is scared off?

Emma is irritated she’s sharing Christmas with Leyla and when the latter invites them all to Jacob’s homecoming, she ends up offending Emma even more!

Seems she’s not mother-in-law of the year when she suggest Kasim moves in with them and he hurries away.  She later insists he join them for lunch at the B&B but is it all too much for Kasim?  He later confides to Leyla that he thinks things are moving to fast with Finn.  She’s concerned when she then learns that Finn has bought tickets for him and Kasim to see Kylie Minogue in Australia!  She tells Pete and he shares her concerns for Finn.  Pete tries to tell Finn not to give the present to Kasim but it’s no use and soon Finn is making a show of presenting Kasim with the tickets.  How will he respond?

It seems Ronnie isn’t Chrissie’s only problem this week as sister Rebecca has taken it upon herself to invite most of the village to Home Farm for New Year’s Eve.  As Rebecca looks through a slide show that’s been prepared she realises Chrissie has changed the content and sets out to get her revenge.  What will the villagers see on screen to welcome in the new year?

Ashley doesn’t register it’s Christmas or that it’s Gabby’s birthday leaving the latter upset until she discovers a box of wrapped presents from him and realises he must’ve done it early whilst he still remembered.  As the family head out sans Ashley to the church spirits are dampened but turns out there’s a Christmas surprise for the Thomas family after all.

Could the season of goodwill to all men, including Cain be working it’s magic on Moira?  How will Moira react when he wonders if there’s still a chance for them?

Both Kerry and Dan are feeling lonely this Christmas, but at least Kerry’s compensation claim against the Sharma’s seems to be progressing.

Ronnie is left feeling self-conscious when Lawrence buys him a flashy watch for Christmas.  Chrissie overhears him on the phone and becomes suspicious.  When she sees Eric Pollard with Ronnie’s new watch she strikes a deal and later catches Ronnie off guard when she gives him the watch back.  How will Ronnie react?