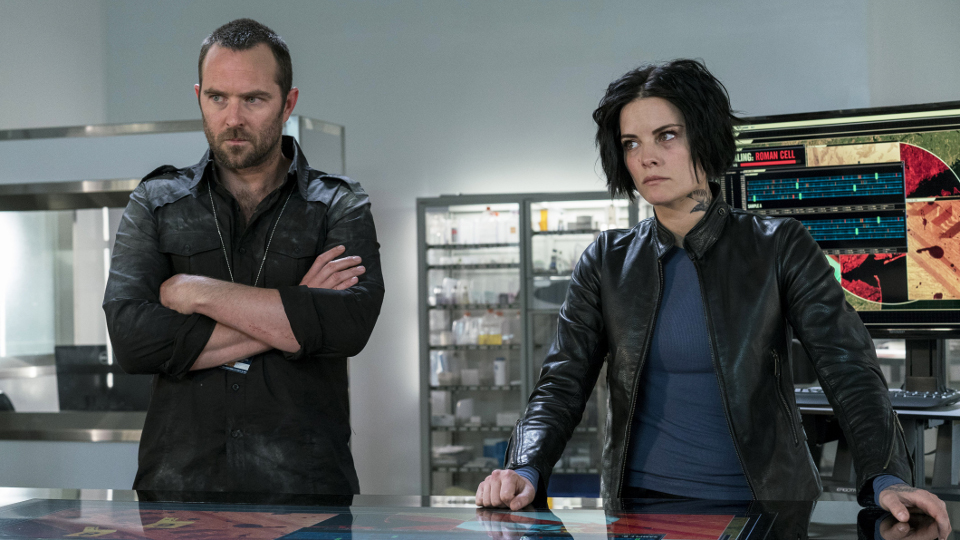 The latest episode of Blindspot moved at a blistering pace. It began with Roman (Luke Mitchell) taking Jane (Jaimie Alexander) to Sandstorm’s HQ.

For the first time he let her see the outside of the building. Inside he left her alone where she grabbed a mobile phone. Next they met with Shepherd (Michelle Hurd) who was looking at plans for Phase 2. She locked them in a filing cabinet before Jane was left alone again.

Jane moved quickly to pick the lock and sent images of the maps inside to Patterson (Ashley Johnson). She then made a call to alert Weller (Sullivan Stapleton) and the team to the plans and also her location. Shepherd caught her in the act and Jane tried to cover it up saying she just wanted to finally know what was going on. Roman knocked her out.

Back at the FBI they quickly worked out the location that Jane said was Sandstorm HQ. An assault team was put together but as they moved out Weller received a call purportedly from Allie’s boyfriend. He explained she had been in a bad car crash so Weller rushed to the hospital instead.

When Jane became conscious Shepherd explained that they knew all along that she was working with the FBI. The identity of the FBI mole was then finally revealed to be Dr. Borden! (Ukweli Roach). Jane had a flashback to her Afghanistan mission and realised that Borden was the husband of the doctor who helped her recover. When the US tried to kill Jane in a drone strike she escaped but Borden’s wife was killed. It was revealed that Jane was the one who recruited Borden into Sandstorm.

Shepherd also then revealed that they were in a new location. The had pretended to start Phase 2 to set a trap for the FBI. The previous location where they were headed had been rigged with explosives to take out the FBI team. She said they had different plans for Weller.

At the hospital Weller realised something wasn’t right when Allie wasn’t there. He called her home and spoke to her actual boyfriend and discovered she was safe and well. He called Patterson to get her to contact the team.

It was too late as Nas (Archie Panjabi), Zapata (Audrey Esparza), Reade (Rob Brown) and the rest of the assault team were inside. She couldn’t reach them as mobile signals were jammed. They realised it was a trap but were too late to escape. The bombs went off and most of the team were killed.

Zapata made it out injured but alive while Nas and Reade were trapped under the rubble. Nas was ok but Reade’s legs were pinned. Nas tried to signal for help by banging on a metal girder. Weller arrived with a rescue team and managed to get Reade and Nas out safely.

Back with Jane, Shepherd handed Roman a gun and ordered him to kill Jane. It was a test of loyalty and the gun was empty. When he turned it on Shepherd she shot him. Jane managed to break free and began to fight back and it ended when Roman shot Shepherd.

Jane and Roman escaped to the safehouse where she was tattooed and her memory wiped. She wanted him to go back to the FBI with her but he refused. While treating his wounds Jane injected Roman with Zip to wipe his memory.

Back at the FBI, Reade needed surgery. Before he went down he told Zapata that he loved her. He also explained that he did have a chance to save Coach Jones but watched him die. She said it didn’t matter.

At the end of the episode Patterson recognised Dr. Borden’s ring and realised that he must be Sandstorm’s mole in the FBI. She pulled a gun to arrest him and the pair fought. A shot was fired but we didn’t get to see if one of them was hurt.

The next episode is Nor I, Nigel and here’s the official synopsis:

Jane and Weller must race to find the missing Patterson and the newly amnesiac Roman before Shepherd eliminates them.