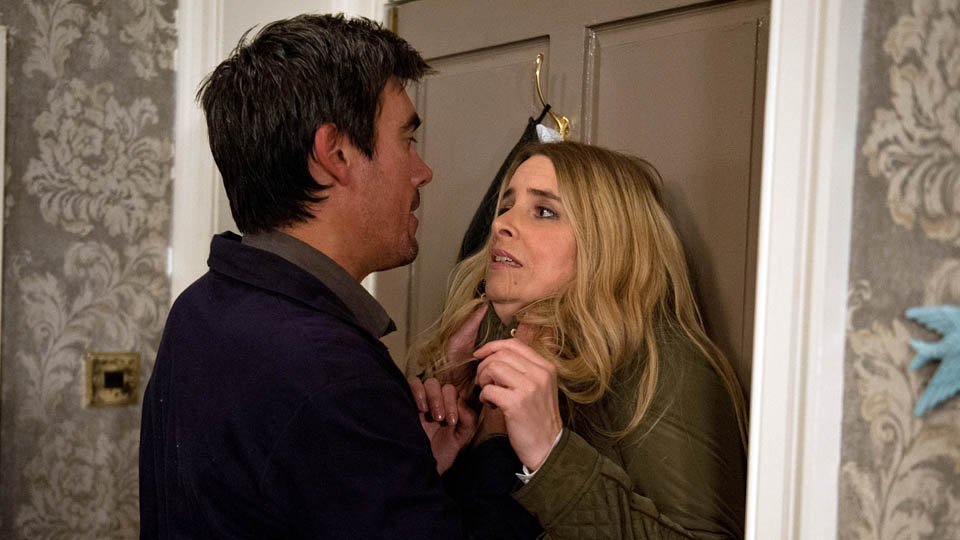 What a stressful week it was last week in Emmerdale with the untimely passing of Holly Barton leaving us all reeling.  This week there’s more drama in store and the threat of two more favourites leaving the village, plus Kerry has some explaining to do and Pierce is beginning to reveal another side to his character.

Charity and Cain to leave the village?

Charity is feeling vulnerable after Cain is spending so much time helping Moira and even Noah tells her that Moira was a better mum to him than she is.  Perhaps looking for reassurance or sympathy (or both!) she phones Debbie and is shocked to learn that she’s planning to settle in France;  she dreads telling Cain the news.

It looks like she was right to be worried as Cain hits the roof when he learns of Debbie’s plans and starts smashing things up.  Soon he’s taking it out on Charity and throws her up against the wall.  Later, she tells him that she is leaving and he’s startled to realise that she is serious and that he would miss her, so he suggests he leave with her.

As Cain heads off to tell Moira, Charity announces it to the pub and gets a tongue lashing from Pete on the role of being a parent.  It looks like his words have hit a nerve as she tells Ross that he should keep Moses when she leaves the village.  Meanwhile, how will Moira respond to the news?  Surely we’ve not about to say goodbye to Emmerdale’s own Bonnie and Clyde?

Rhona learns that Pierce has threatened Paddy, but he just shrugs off the accusation but is struggling to keep his temper.  He starts to form a plan to keep Paddy out of their lives;  he sneaks a t-shirt into Paddy’s bag to make it look like he stole it.

Paddy is distraught when people think he took the t-shirt and soon knows that Pierce is behind it.  Pierce tells Paddy he needs a written agreement that he won’t enter Smithy Cottage and Paddy agrees, but is he for real?

Kerry is caught out by Dan

Whilst Dan tries to make an effort to be more interested in his upcoming wedding to Kerry, she’s dragging Joanie along with her to get a scan.  She’s racked with guilt when Dan presents her with wedding magazines and lies that she’s going for a wedding dress fitting.

When Hetty the van won’t start she ends up ‘borrowing’ a car from the garage and parks on double yellow lines outside the clinic because she’s in a rush.  Meanwhile, Ross discovers the missing car is outside the clinic and soon him and Dan arrive to have it towed back to the garage.  Inside the clinic, Kerry is taking the pill and she gets caught leaving by Dan who demands to know what she’s doing at the clinic;  he thinks she is seriously ill.

Will an emotional Kerry be able to keep the truth from Dan?

After Holly’s death, Moira decides she doesn’t want to leave the farm any more.  Later, she’s a little worse for wear in the pub and Ross drives her home, but will she let something slip in her drunken state?

Leyla dresses to the nines for her date with Pete but is that appropriate for what Pete’s planned?

Marlon confides in Rhona about his recent insecurities regarding Carly and she decides to tell Carly.  Will she find away to make Marlon feel secure and manly again?

Laurel struggles to leave baby Dotty with Diane when she has to go back to work.

James and Emma are excited to move into Wylie’s Farm and get the boys to help with the packing.

Rishi finds suspicious expenses on the company account and points the finger at an offended Jai.  He realises it must be Priya and Rakesh then and confronts Priya.  This just makes her think Rakesh really is having an affair.

Emmerdale is on ITV1 at 7pm weeknights with an additional show at 8pm on Thursdays.