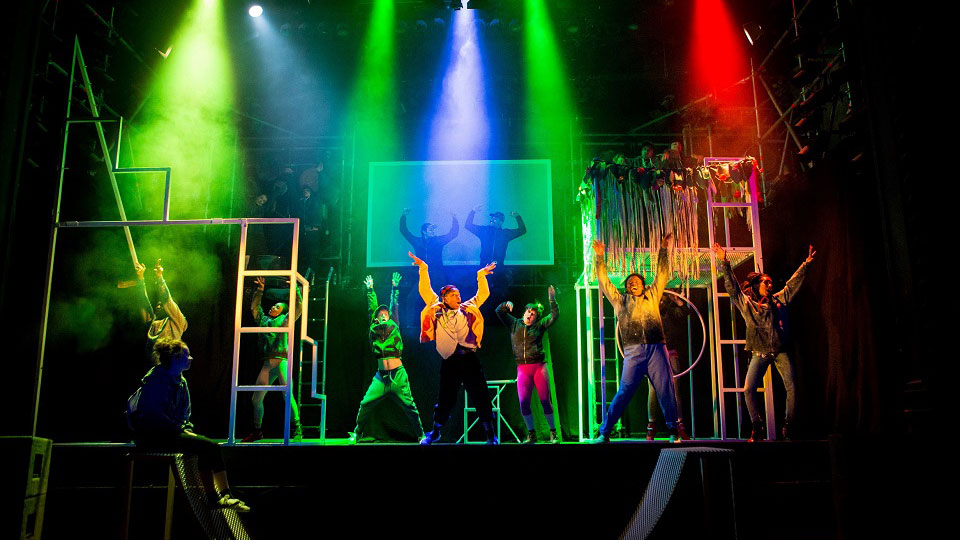 The National Youth Theatre (NYT) is celebrating its 60th year with an energetic new season of innovative adaptations at London’s Ambassador Theatre: Romeo + Juliet, DNA and Pigeon English. The latter is an adaptation of Stephen Kelman’s debut novel, from award-winning playwright, Gbolahan Obisesan. It tells the story of Harrison ‘Harri’ Opoku, an 11 year-old Ghanaian boy who is new to London and living on a council estate affected by a murder.

I confess, an unread copy of the title has been resting on one of my bookshelves for five years. Shortlisted for the Man Booker prize in 2011 – as well as the Desmond Elliott Prize and the Guardian First Book Award – it is one of those much-lauded novels I tell keep telling myself to read yet never pick up off the shelf. The plot was inspired by Kelman’s childhood experiences in Luton, and the fatal stabbing of ten year-old Damilola Taylor in 2000. It has never sounded like happy reading.

The arrival of an invitation from the NYT to attend a matinee performance of Obisesan’s adaptation, meant I could no longer ignore Kelman’s story. It demanded my attention and I owed it my time. Thankfully, it was a deserving recipient and my fear of sitting through two hours of grief and depression were unfounded.

Merging dance, beatboxing, poetry and humour, the production is directed by Anna Niland and captures the atmosphere of London’s council estates with scary accuracy. We are immediately drawn into a world where hopes, dreams and young love are juxtaposed against murder, violence and crime.

The cast delivers exceptional performances, led by Seraphina Beh as our exuberant protagonist. Her portrayal is so convincing, some of the audience won’t realise she’s female until it’s playfully highlighted in the script, midway through the show.

Beh’s acting is closely matched by Chinenye Ezuedu’s depiction of Harri’s hard-working mother and Kwami Odoom’s menacing turn as gang leader, X-Fire. I wouldn’t be surprised if all three go on to become familiar names in the acting world, ranking alongside NYT alumni Rosamund Pike, Daniel Craig, Helen Mirren, Chiwetel Ejiofor and Matt Smith. Hot on their trail will be Charlotte Law, who is cast as Never Normal Girl and moves the narrative forward with thought-provoking commentary in the form of poetry.

The set, designed by Cecilia Carey, is simpler than expected: fixed, white scaffolding with a raised platform and a hanging hoop. With the flick of a switch, lighting and sound successfully transform the structure into a home, skate-park, playground, basketball court, balcony, school and church. The hypnotic cooing of roosting pigeons to identify the Dell Farm Estate is particularly realistic and it is there, on the ninth floor of Luxembourg House, where Harri lives with his teenaged sister, Lydia (Daisy Fairclough), and their mother. Their father, grandmother and baby sister, Agnes, are
forced to remain in Ghana.

Unfortunately, even with 17 members of the cast, some of the musical numbers are hampered by an overly loud soundtrack and the singing from certain actors is inaudible. Also, the interval was ill-timed, arriving at an uneventful junction to give the narrative a disjointed feel. Even so, it’s still an impressive show and I regret my decision to ignore the book for so long.

A class of 13 and 14 year olds were in attendance in the audience and their post-show debate was both passionate and heart-warming. “It was really good,” announced one pupil. “I’m glad we got to see it!” This sentiment was echoed by most of her classmates and one most theatre-goers should agree with.

With adult themes and language, this is a mature production, delivered by a gifted young cast who deserve much praise. You have until November 22nd to catch a performance at the Ambassadors Theatre and it’s worth the effort.

This remarkable tale of one child’s experience in London will move you to laughter and tears, and provoke thoughts that will stay with you long after the curtain comes down.