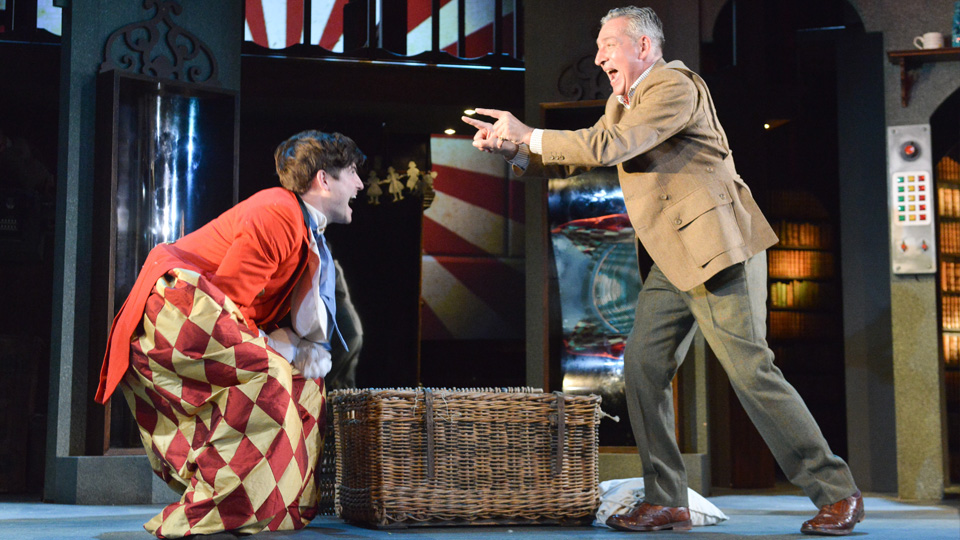 Sleuth is the first show to hit the Quarry stage this season. A co-production between West Yorkshire Playhouse and Nottingham Playhouse, Anthony Shaffer’s classic cloak-and-dagger thriller is re-imagined under the direction of Giles Croft.

Miles Richardson stars as Andrew Wyke, a scheming writer who stages a crime to ensnare his ex-wife’s lover. James Alexanrous plays Milo Tindle, the cad tempted into an insurance swindle which becomes a devious game of cat and mouse – and murder.

Sleuth is perhaps best known through its film adaption starring Laurence Oliver and Michael Caine. Giles Croft’s version is an altogether lighter affair; an energetic escapade of tomfoolery and circus-like slapstick, initially shrouding the malicious intent of its characters. The play is essentially a demonstration of one-upmanship, which escalates into a murder, or at least it seems to.

Nothing is quite as it appears in Sleuth and that’s where much of the fun can be found. Not only does the plot twist and turn, but so does its tone. The audience are constantly wrong-footed as to the show’s intent, teasing with absurd moments which bracket some genuinely nasty ideas. The finest example is the image of a pratfalling clown having his brains blasted across a stairwell. It’s absurd fare with a cruel streak, observed in a space echoing with nervous titters.

Leading roles are suitably filled by Miles Richardson and James Alexandrou. Richardson brings a pompous eccentricity to the role, with a level of caffeinated mania which rightly infects Alexandrou’s development of Milo. The constant upstaging between the two is addictive viewing, whilst a naturalistic style grounds the outrageous happenings in a plausible reality. These are strong performances played with pomp and charm.

The show is a claustrophobic potboiler that feels a little exposed in the cavernous Quarry theatre, but thanks to its leads it constantly pulls focus. The luxurious set twists and turns as much as the plot, offering stylised projections with vivid graphic design. Countless moving parts and complex clockwork mechanisms provide engaging textures. In terms of innovate stagecraft, Barney George’s design team deserves much commendation.

Sleuth has its problems and its irregular tone may throw audiences off the track. However, it succeeds in ticking many of the boxes of its genre and offers more besides. Meticulous stagecraft delivers a kaleidoscopic quality and thanks to two vibrant performances it never loses its playfulness. Beguiling, cunning and full of twists and turns, Sleuth is devilishly good fun.