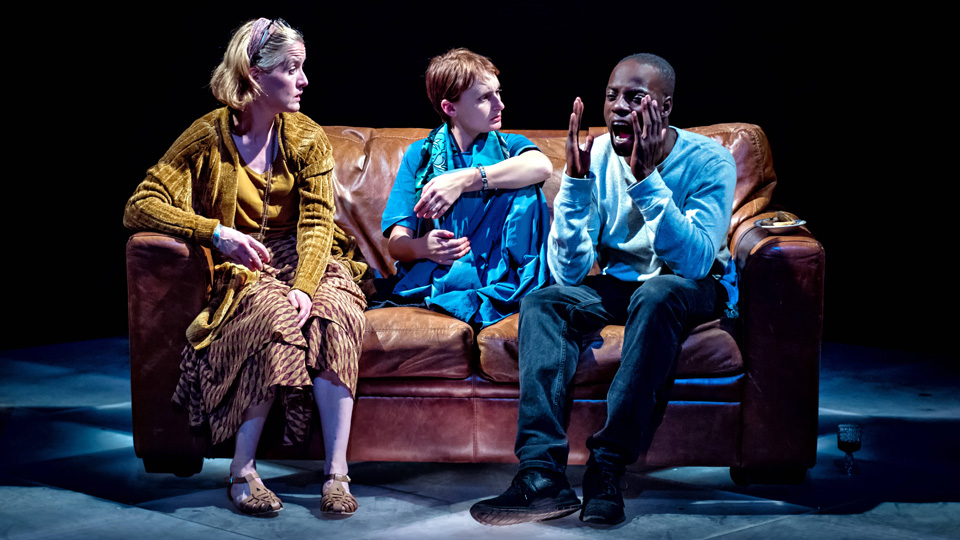 In the 200th anniversary of Charlotte Brontë’s birth, West Yorkshire Playhouse presents a season of contemporary adaptations celebrating the Brontës’ work. One of these reimaginings is Villette, an unusual science-fiction fable by Linda Marshall-Griffiths.

Lucy Snowe is a clone, a “descendant”, who joins a scientific excavation to recover the remains of a woman who was once immune to a plague which is again threatening the world. As the scientific crew becomes a surrogate family, Lucy visualises her twin sisters as a fractured version of herself and begins to consolidates her identity through a romance.

First impressions present a vivid spectacle on stage. A soil-filled space is punctuated by halogen lights and cables. Scientists in high vis gear clamber from the ground, assessing their findings. Centre stage is a sterile square platform, clinically lit from below. From above hangs a large diamond frame displaying video and complex algorithms. It’s an impressive window onto a future, albeit a future arguably envisaged in the 1990s.

Initially, the play feels like it owes more to Nigel Kneale’s Quatermass and the novels of John Wyndham than to Brontë, but at the heart of this story is the tale of a woman’s identity growing from the shadows of her deceased sisters. Villette has an uneasy atmosphere; an underlying unrest, as if the soil should be left undisturbed and its history never exhumed. The play unearths the dirt of the land as one would tentatively dig into one’s own unhappy past.

The central character is Lucy Snowe, passionately played by Laura Elsworth. The dialogue is alien, purposefully offbeat yet performed with a staccato rhythm that at times feels a touch exaggerated. There is anguish and fervour in the performance, however the writing doesn’t seem to offer further shades other than bouts of psychosis. There are a few softer moments, but on the whole, the character feels decidedly one note. Perhaps that was the intention; entrapped as a clone who has a fragmented, shared identity with her sisters. Either way, it makes for a sometimes wearying and unsympathetic protagonist.

We are exposed to scenes of bones being retrieved, social parties, typhoons of internal anguish, all wrapped up in impressive stage effects and sound. A projection provides a dateline and characters often speak impersonally through the eye of a camera. It’s all professionally put together, but the ensemble of characters feel thin and ill-defined. It’s not until a lighter Christmas scene on a sofa that there is a closer study of these scientists and the future world they live in, which is genuinely interesting. This would have been as good a place to start the story, establishing some dynamic charisma before driving the plot forward in the clinical, heartless space of the laboratory.

Villette showcases a vibrant cast. Philip Cairns is warm and engaging as Paul, Lucy’s unlikely love interest. Catherine Cusack is agreeably steely and distant as Beck, though is arguably a little underused. Nana Amoo-Gottfried is charged and youthfully upbeat as John, whilst Amelia Donkor gets to have the most fun as Gin, the fancy-free girl with a healthy work-life balance.

Mark Rosenblatt’s direction ensures that a succession of short, rapid scenes transition smoothly and that the play is cohesive, despite some radical cross-cutting between psychosis, dance, and investigative stage business. Rosenblatt’s heavy use of technical stagecraft genuinely creates a sense of unrest, combining a sound mix and lighting palette which lends a gothic quality to the futuristic environment. A particularly chilling masterstroke shows Paul enter the heart of the dig, appearing onscreen as he studies some human remains.

Villette is a bold concept which is well realised on stage. It feels a little like a play which has a few too many ideas, with not all of them well served. As a reimagining, Villette is certainly daring and original, offering flashes of brilliance and the seeds of great ideas. It’s well worth seeing for its morbid ambience alone.