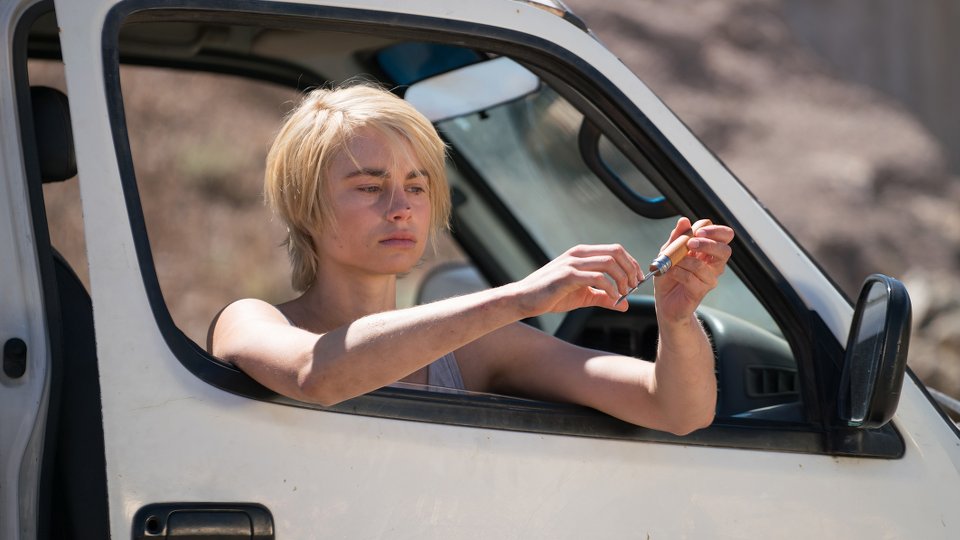 Determined to track Mick down, Eve travelled to Kutyukutyu where she stopped for supplies after getting her foot caught in an animal trap. After stopping at a gas station, Eve had an uncomfortable confrontation with a group of men but was rescued by a woman with a gun. Her bad luck didn’t stop there though and she rear-ended a police car.

The police woman inside searched Eve’s fan and found drugs, so she took her to the local jail and put her in a cell. At first Eve was worried about the two men in the cell next to her but when Detective Hill (Dustin Clare) turned up, she thought she’d get her freedom. Unfortunately the local police wouldn’t let her go so Eve scrambled up a wall and out of a window, making her escape.

She tracked Hill down at his motel and lied to him about being set free with a caution. Her story was soon blown when the local police turned up and she made another run for it. No longer able to use her van, she went back to take some belongings from it where she saw her former cellmates leaving. She followed them to their house and stole a bag of money and a gun from them.

Meanwhile Mick attempted to lure two women to their deaths but when some locals interfered he took his anger out on them instead. He also learned that Eve was still alive and hunting him down.

The next episode of the season is Salt Lake. At Salt Lake, South Australia, Eve is attacked by Kevin. Hill, Taylor and the bikies search for Eve at the Face of the Madonna Roadhouse.