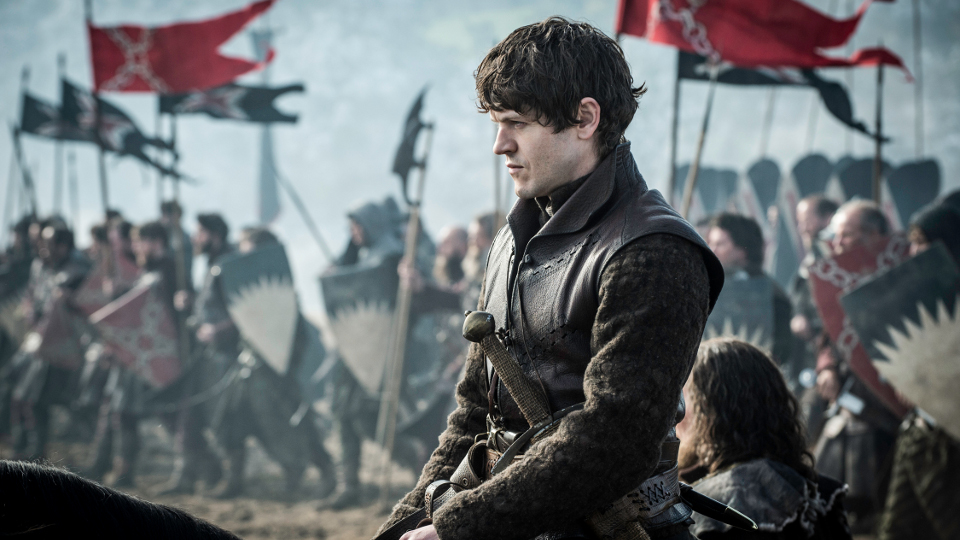 The eighth episode of season six finally moved on the story of Arya Stark and appeared to put an end to her stay at the House of Black and White.

We mentioned our predictions for the ninth episode in our Battle of the Bastards preview.

The episode opened up across the Narrow Sea in Meereen. Daenerys (Emilia Clarke) watched as the Masters pounded the city from their ships. A nervous Tyrion (Peter Dinklage) tried to tell her that despite how things looked, the city was on the rise.

Daenerys was keen to crucify the Masters and destroy their soldiers. Tyrion however managed to convince her to take a shot at diplomacy first an she met with the Masters. They set out a list of terms of surrender and told her that her reign was over.

She replied that her reign had just begun and moment later Drogon appeared. She climbed onto his back and flew off toward the pyramid where her other two dragons finally broke free of the dungeon. As they took to the sky, the Dothraki army arrived and took on the Sons of the Harpy.

A whisper of ‘Dracarys’ (meaning Dragonfire) prompted her dragons to unleash their fire breath on the attacking ships. In just a few minutes Daenerys had taken control back.

Back at the meeting, Tyrion pointed out to the Masters that they had gone back on their pact. He suggests that one of the three must die. As Grey Worm (Jacob Anderson) stepped forward two of them teamed up against the third. He knelt and Grey Worm sliced the throats of the other two with one deft move.

Tyrion told the survivor to go back to his people and tell the story of what happened when Daenerys and her dragons came to Meereen. Phew, what an opening!

Later, Yara (Gemma Whelan) and Theon Greyjoy (Alfie Allen) arrived to offer their fleet to Daenerys. Tyrion had met Theon previously and remembered him making fun of his height. They have 100 ships to offer in return for Daenerys helping Yara reclaim the Iron Islands from Uncle Euron.

She agrees as long as the Ironborn change their ways and then the women grabbed each other’s forearms to seal the deal. It looks like Dany will finally head to Westeros, how can anyone be a match for her army and her dragons?

Near Winterfell, Jon Snow (Kit Harington), Sansa Stark (Sophie Turner), Ser Davos (Liam Cunningham) and Tormund Giantsbane (Kristofer Hivju) rode out to meet with Ramsay Bolton (Iwan Rheon), Harald Karstark (Paul Rattray) and Smalljon Umber (Dean S. Jagger). Ramsay thanked Jon for returning Sansa, his beloved wife, and said he was a man of mercy and that there was no need for battle. All Jon had to do was kneel before him.

Jon agreed that there was no need for battle. Instead he proposed a 1v1 fight, him versus Ramsay to settle things. Ramsay knew Jon is a better swordsman and wasn’t prepared to take the risk. Instead he pointed out that he had a bigger army and would win on the battlefield.

He also threatened the life of their brother, Rickon (Art Parkinson). Sansa asked how they knew he even had him captive and Smalljon Umber threw down the head of Rickon’s Direwolf, Shaggydog. Sansa told Ramsay that he would die the next day and told him to sleep well before riding off. Ramsay told Jon his sister was a fine woman and looked forward to having her back in his bed. He also said his dogs were hungry as he hadn’t fed them for a week.

The night before the battle Jon, Davos and Tormund attempted to plan how things might play out. Jon felt that Ramsay’s men were only fighting for him because they had to. Tormund was mostly concerned that Ramsay had a lot of horses. Jon suggested they dig trenches to combat this.

After the meeting Sansa told Jon not to be over confident and that he shouldn’t do what Ramsay wanted and fall into his trap. Jon was frustrated and Sansa promised that if they lost she would not go back to Winterfell alive. Jon promised he wouldn’t let that happen and that he would protect her. Sansa said nobody could protect her or anyone else.

Outside, Tormund said there was hope and suggested that Davos and he get drunk. Davos wanted to keep a clear head and went walking. He came across the site where Shireen Baratheon was burnt alive and discovered the wooden stag he had made for her.

Meanwhile, Jon went to talk with Melisandre (Carice Van Houten) and told her not to bring him back again if he fell. She said she would have to try and that it was up to the Lord of Light not herself.

The next morning, the armies lined up opposite each other with Winterfell in the distance. Ramsay rode to the front of his army with Rickon on a rope. He drew a dagger and a worried Jon watched helplessly. Instead of killing him there and then, Ramsay suggested a game, freed Rickon and told him to run to his brother.

As Rickon began to run, Ramsay grabbed a bow and started to shoot arrows at him. Jon immediately charged across the battlefield on horseback to try and save his brother. The first few arrows from Ramsay missed on purpose. As Jon got to Rickon a final arrow pierced his chest, killing him.

Jon suddenly realised he’d done what Sansa told him not to do and fallen into Ramsay’s trap. Ramsay ordered his archers to fire leaving Jon no choice but to charge the entire army on his own. As he approached, Ramsay unleashed his cavalry and Jon unsheathed Longclaw.

Ser Davos and Tormund realised what was happening and told the army to charge. They made it to Jon just in time and clashed with the Bolton army. Chaos ensued and Jon, Tormund and Wun Wun (Ian Whyte) began fighting their way through as many men as they could.

Davos stayed back with the archers but couldn’t let them fire without risking killing their own men. Eventually they had to charge to join the fight. Ramsay watched on as Jon’s entire army gathered in the middle of the battlefield.

Ramsay then used his troops with shields and pike’s to surround Jon’s army on three sides. The fourth side was a wall of dead bodies. Ramsay then had his troops slowly close in pushing Jon and his troops together. They tried to fight back and break through the shields but were outnumbered.

House Umber was then unleashed and climbed over the bodies to attack from the fourth side. Tormund rallied the Wildlings to fight back and Jon found himself on the floor getting trampled. Eventually he made it back to his feet and Tormund faced off against Smalljon Umber.

Ramsay smiled as he prepared for victory. Suddenly the Knight’s of the Vale appeared and rode in to join the fight, saving Jon and his men. Sansa watched on with Littlefinger (Aiden Gillen).

The Knights of the Value quickly cut Ramsay’s remaining men to pieces and Tormund put an end to Smalljon Umber. Ramsay decided to retreat to Winterfell and Jon, Wun Wun and Tormund gave chase.

At the gates of Winterfell, Wun Wun got to work on smashing them down. While doing so he took an incredible amount of arrows and once inside fell to his knees. Jon looked at him with admiration and thanks before Wun Wun was killed by an arrow through the eye from Ramsay.

Ramsay realised he was outnumbered now and decided that 1v1 combat was a good idea after all. He fired arrow after arrow at Jon, who blocked them with a shield as he advanced. As he made it to Ramsay he used the shield to knock him to the ground. He then punched him repeatedly in the face almost killing him, only stopping when Sansa arrived.

Ramsay was tied up and taken to the cells. Jon ordered Rickon’s body to be placed with his fathers. The Bolton banners were removed from Winterfell and replaced with Stark banners once again.

At the end of the episode Sansa went to see Ramsay. He said she couldn’t kill him as he was part of her. She replied that he and everything about him would soon disappear. Sansa then released Ramsay’s own hounds into his cell. Ramsay laughed that they were loyal to him and would never harm him.

Sansa reminded him that he hadn’t fed them for a week. The dogs approached and Ramsay ordered them to back off and sit. They didn’t listen and soon began tearing him apart, starting with his face. We didn’t think there was a satisfying way to kill Ramsay but this worked well, Sansa obviously agreed as she walked away smiling. What an incredible episode.

Let us know your thoughts on Battle of the Bastards in the comments below as well as your hopes for the rest of the season.

Already looking forward to the season finale? Read our preview of Episode 10 ‘The Winds of Winter’.

Game of Thrones season 6 concludes at 2am (simulcast with the US) and 9pm Monday on Sky Atlantic in the UK.

View more images from Battle of the Bastards in our gallery below: