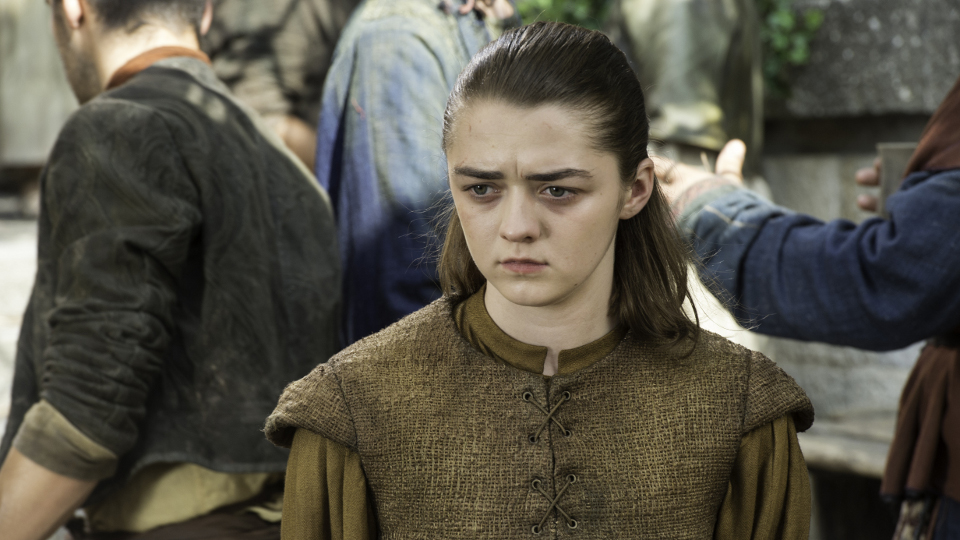 Game of Thrones season 6 continued with its seventh episode, The Broken Man (read our recap).

If you’re not up to date on the Game of Thrones TV show and like to avoid spoilers (you have been warned) we suggest you don’t read any further. Below is information we’ve taken from the episode 8 preview trailer as well as speculation about what we think might happen.

The eighth episode is written by showrunners David Benioff & D. B. Weiss with Mark Mylod in the director’s chair for the second time this season. The episode is titled No One which maybe hints at a focus on Arya Stark (Maisie Williams), here’s the official synopsis:

Watch the official preview trailer from HBO for episode 8 below:

The trailer opens up with Cersei (Lena Headey), flanked by The Mountain (Hafþór Júlíus Björnsson) and Qyburn (Anton Lesser), as she approaches Brother Lancel (Eugene Simon) and a group of his fellow Sparrows. Lancel says ‘Order your man to step aside or there will be violence’ to which Cersei replies ‘I choose violence’. We’re finally going to see The Mountain go on a rampage against the Sparrows and don’t fancy their chances.

Next we see Brienne (Gwendoline Christie) and Podrick (Daniel Portman) arriving at Riverrun. The Lannister army is camped outside waiting for Brynden ‘The Blackfish’ Tully (Clive Russell) to surrender. Brienne, talking to Jaime Lannister (Nikolaj Coster-Waldau), says ‘Should I fail to persuade The Blackfish to surrender, and if you attack the castle, honour compels me to fight you. Brienne is also seen handing Sansa’s letter to The Blackfish.

Jamie replies ‘I love Cersei, and if I have to slaughter every Tully who ever lived to get back to her, that’s what I’ll do’. Under the cover of night we see Jaime and his army approaching the castle. Also at night, Brienne is seen with The Blackfish as he draws his weapon. We could be in for a large battle but suspect it might not come to that.

The trailer ends with the usual montage of quick snippets. The Waif (Faye Marsay) turns to stare at someone, presumably Arya. The Hound (Rory McCann) is back to his violent ways as he swings his axe at some guy.

Podrick is grabbed from behind by someone, possibly Black Walder. Will Jaime use him to bargain with Brienne? She is seen sailing away from somewhere looking worried. Maybe she escapes Riverrun?

Tyrion (Peter Dinklage) is stood looking up at the ceiling and the hanging fire brazier appears to move. Could we be in for some more dragons?

The Sparrows go up against The Mountain and it looks like he probably rips them to pieces. Will Lancel survive? Cersei is looking rather pleased for herself.

Finally The Waif is seen pursuing someone through crowds of people. We presume she is chasing Arya and the final snippet shows a girl, probably Arya, jumping away from camera. We’re hoping Arya puts an end to The Waif before she leaves Braavos.

Want to know more? Check out the first images from Game of Thrones 6×08 No One.