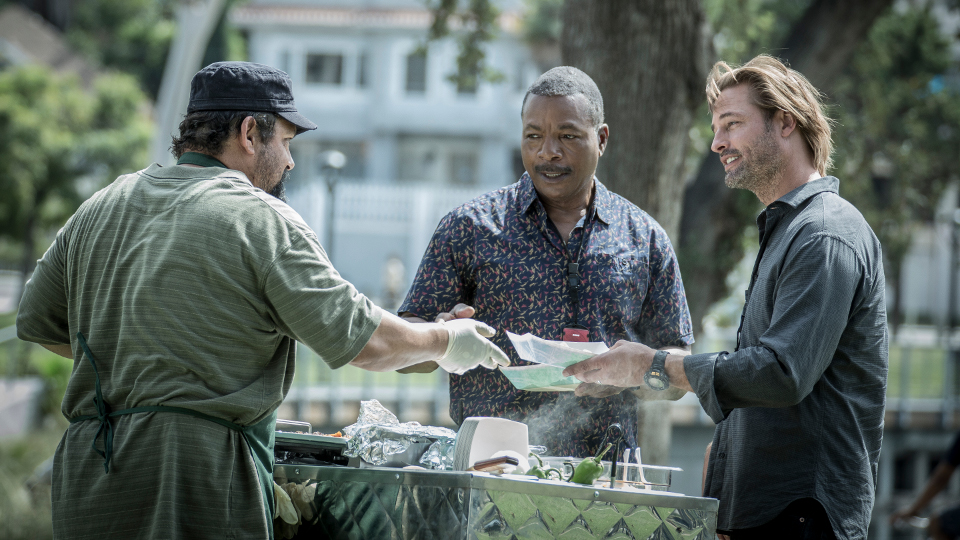 On the latest episode of Colony, Katie (Sarah Wayne Callies) was starting to find herself feeling cut off from everything.

She’s in an awkward place trying to juggle her desire to be part of the Resistance while keeping her family together. Will (Josh Holloway) being a collaborator prevents her from being open with him. The Resistance now think she’s some kind of double agent and cut themselves off from her.

Quayle sent Broussard (Tory Kittles) to kill Katie but he struggled with the assignment as she’s about the only person he trusts. He understands her situation and knows that she’s come through for the Resistance on several occasions. He eventually met up with her and took her up into the hills above the city. He questioned her loyalty which upset her and let her walk away.

She eventually managed to extract information on Broussard and uncovered a whole range of different identities for him. One strange thing is that she couldn’t find any military background. After discovering that Broussard had been in the Yonk, Will decided to question Katie to see if she remembered him. He showed her photographs of Broussard’s victims including Phyllis who was killed because of the information Katie leaked.

Katie was torn about who to help but after nearly losing her life she gave him some clues to put him on the right track. Later she was visited by Resistance member Rachel who made her change her mind again so she warned Broussard that Will was coming for him.

Elsewhere in the episode, Snyder gave Will a photograph of their missing son Charlie. He took it home to Katie to show her that Snyder was trying to help and that Charlie was still alive. They were upset at their son having to grow up without his parents.

We also learnt some surprising information on Katie’s sister Maddie. Her job for Charlotte, that helps her get insulin for her son, involves sleeping with Charlotte’s husband Noland while she watches. Noland was keen on continuing things without Charlotte but Maddie refused. Charlotte was informed of this by one of her servants and threatened to fire Maddie.

We also found out that Noland is involved in some kind of bizarre religious cult. They appear to be expecting something great to happen with the Hosts. The cult is brainwashing children and it turned out that one of their members is the nanny to the Bowman’s children.

The next episode is In from the Cold. Quayle makes a costly error when he underestimates how far Will will go to protect his wife.

Tune into Sky 1 at 9pm on Thursday to watch the episode. Preview episode 8 with our gallery below: