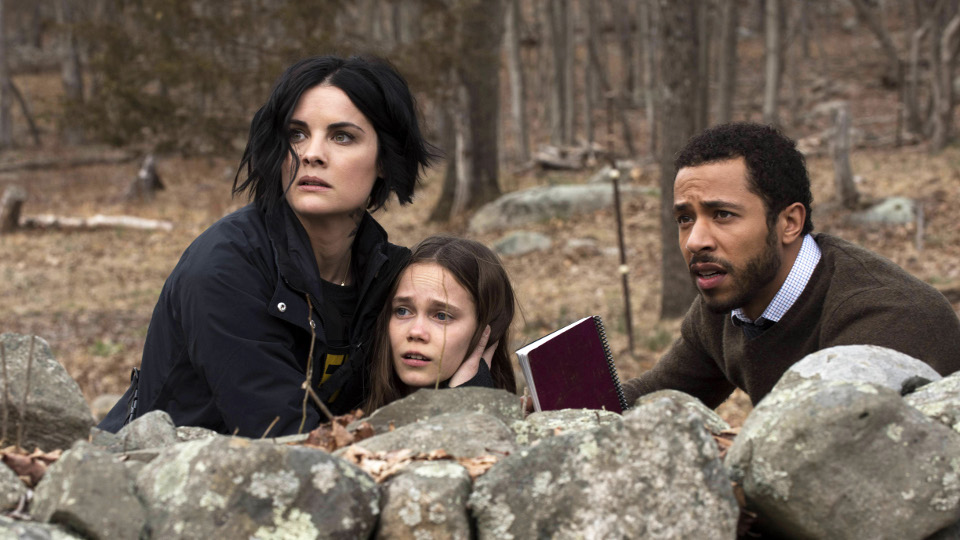 The latest episode of Blindspot opened up where the last one left us. Sofia, who was presumed dead, was actually alive and had got in Mayfair’s car.

She explained that she had become scared of their involvement in Daylight so faked her own suicide and ran away to Paraguay. A recent attempt on her life had forced her to leave hiding and she had come back to Mayfair asking for help. Mayfair offered her to stay but eventually handed over her life savings.

The episode was a little different to usual and split off from the main action of each character to show flashbacks. Zapata’s flashback showed her at a Gambler’s Anonymous meeting where she was trying to deal with her addiction.

Jane’s was showing her earlier meet with Oscar (François Arnaud). He suggested breaking off as her handler but she disagreed and asked him to meet her again in the evening. Weller’s was showing him talking with his dad in hospital where his dad forgave him. Reade’s showed him at his tailor buying a new suit and talking about his relationship breakup with Sarah.

Zapata solved one of Jane’s tattoo’s which led the team to Hudson University. At first it looked like they had uncovered some kind of scholarship fraud. However they suddenly found themselves in an active shooter situation on campus.

Weller (Sullivan Stapleton) and the team found that their comms were being jammed so decided to tackle the situation on their own. He and Jane (Jaimie Alexander) took one side of the campus while Reade and Zapata took the other. They helped evacuate the students and staff.

Everyone eventually split up to cover more ground as they realised there were two shooters. Zapata found the coach who had been shot in the leg. As she tried to help him escape one shooter came after them. Zapata ran out of ammo and the shooter had them pinned down in the auditorium. Forunately Jane was able to get there in time to save her and they arrested the shooter.

Weller closed in on the second shooter and came across a booby trapped door. It was rigged with explosives and was preventing him from getting to the shooter. He went into the room next door and through a mini-fridge to break the window (didn’t even bother to make sure no one was below). He then climbed around the side of the building to avoid the bomb. As he battled with the shooter the floor was blown out below.

Reade was on the floor below and had triggered a second bomb. He was lucky not to get himself killed. He soon was captured by the second shooter and he managed to keep him busy long enough for the team to learn his location. The shooter explained they were doing what they were because the coach had abused them and other boys. This shocked Reade who was close with the coach.

Reade tried to talk the second shooter down to save his life but was unsuccessful. When they went outside Weller put a couple of bullets through his brain and killed him.

At the end of the episode Oscar was shown with another man and they had Carter’s body. Something felt not right, is Oscar telling Jane the truth or are they just using her and going to set her up?

The next episode of the season is Swift Hardhearted Stone. A girl with ties to a terrorist organisation falls into the care of the team. Meanwhile, a conflicted Jane grows closer to Weller.