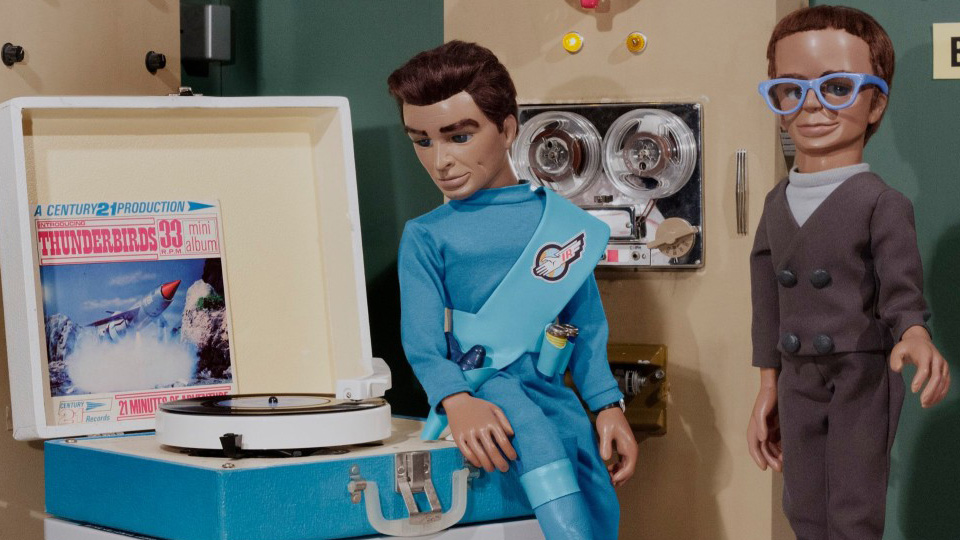 Following the 50th anniversary of hit puppet series Thunderbirds, a unique trio of adventures are released this month as part of a Kickstarter campaign to bring the classic Supermarionation series back for one final outing.

In the Sixties, several audio-only Thunderbirds adventures were released commercially on vinyl. Three of these were original stories, unique from the broadcast series and featuring the voices of the original cast, including Sylvia Anderson as Lady Penelope and David Graham as Parker.

Some fifty years later, these recordings have been expanded and restored to form the basis for three newly-produced episodes, employing the traditional Supermarionation techniques and effects which made the original series a global phenomenon. Released on DVD and Blu-ray to hundreds of Kickstarter campaign backers, we take a privileged look at these unique and brand new episodes.

In 1965, Thunderbirds was one of the most expensive productions of its day and utilised a small army of artistic professionals to bring its explosive action to the small screen. Today, a small team of  dedicated filmmakers attempt to maintain the production standards of the original series on a sliver of the original budget, utilising painstaking practical effects within the confines of the original studio location in Slough.

The first episode, aptly called Introducing Thunderbirds, is directed by Justin T. Lee from a story by Alan Fennell. A fitting prelude to the series, the story showcases the International Rescue vehicles in all their colourful pomp and high-octane glory. An immediately striking aspect of this episode is the High Definition restoration of the original film elements, such as the titles and vehicle launches, which gleam with a rich colour pallet and a tack-sharp clarity. Equally, the newly shot puppet and model sequences have been meticulously colour-timed to match the original Eastman film stock of the Sixties. Aesthetically, Introducing Thunderbirds feels like restored Sixties television, and whilst the story is short and delightfully simple – not unlike a Stingray episode – it undeniably looks, feels and sounds like classic Thunderbirds.

The Abominable Snowman is the second episode, which follows Penelope and Parker as they investigate mysterious happenings in the Himalayas. The infamous Hood is soon revealed to be at the centre of a devious plot with Penelope calling International Rescue to save the day. Directed by Stephen La Riviére from a script by Desmond Saunders & David Graham, the episode boasts a wealth of newly shot model material, including a beautifully designed helicopter sequence which ends in an explosive climax. Following the tradition of the Andersons’ celebrity-casting technique, a guest puppet is charmingly modelled on performer Sanjeev Bhaskar.

The final episode sees the return of David Elliott to the director’s chair. Elliott was responsible for several Thunderbirds episodes in the Sixties and The Stately Homes Robberies is possibly the most ambitious episode in the new trio. When several stately estates are robbed of their treasures, Penelope and Parker track the thieves to the Tower of London and become embroiled in a plot with a ticking time bomb. Hugely evocative of the original stories, this adventure boasts some big-scale model effects and a host of original and new puppet characters. Running at about half the length of a traditional Thunderbirds episode, it is packed with tension, action and charming humour, which raises it slightly above the achievements of the first two episodes, rounding off Thunderbirds 1965 on an explosive high.

Thunderbirds’ characters are instantly recognisable and the Tracy family have become part of the public consciousness. For Thunderbirds 1965, the Supermarionation figures have been recreated as closely as possible to the original sculpts. For some reason – perhaps the memory is cheating here – Gordon Tracy looks a little different with a shock of blonde hair as opposed to the sandy-red cut he sported in the Sixties. The iconic Parker and Penelope, however, are particularly well-fashioned, whilst Scott and Jeff Tracy are indistinguishable from their Sixties counterparts. Staying in the stylistic traditions of Sylvia Anderson’s artistic direction, the stars are also lavishly dressed in kitsch Sixties’ costumes, bursting with colour and charisma.

Aside from the vehicles looking and sounding as impressive as ever – including a spectacular puppet-scale Fab 1 – the scenic construction also stands out as eerily authentic. With sets full of Sixties components and a Lilliput-level of detail, the art department must be commended for such a dedication to authenticity, which is sympathetically lit and photographed using the framing and depth of field as seen in the original show.

An exceptional duty of care has also been provided in the edit, which mirrors the pace and grammar of Sixties telefilms. A delicate touch is a mild softening effect to the captions and crossfades, perfectly mimicking the chemically processed edits of the time. There are more than a few stock elements from the original series used in the episodes, such as the launch sequences and establishing shots of Tracy Island, however the reuse of these was very much part of the Thunderbirds experience in the Sixties and the clips meld imperceptibly within the wealth of new material.

The Blu-ray release offers the episodes in a traditional 4:3 ratio, with an impeccable restoration of the title captions and stock material. Sound has also been carefully cleaned up, offering a dynamic range which matches the bravura of the imagery. The disc also includes an insightful Making Of documentary, as well as several news clips and an introduction from Jeff Tracy and Lady Penelope

Thunderbirds 1965 is a herculean success, celebrating a unique and almost extinct artform. Ambitious and endlessly nostalgic, these new Thunderbirds episodes entertain as well as paying testament to the huge technical achievements of the original series, offering a blockbuster world of action on the small screen. In short, Thunderbirds is back and it’s F.A.B.