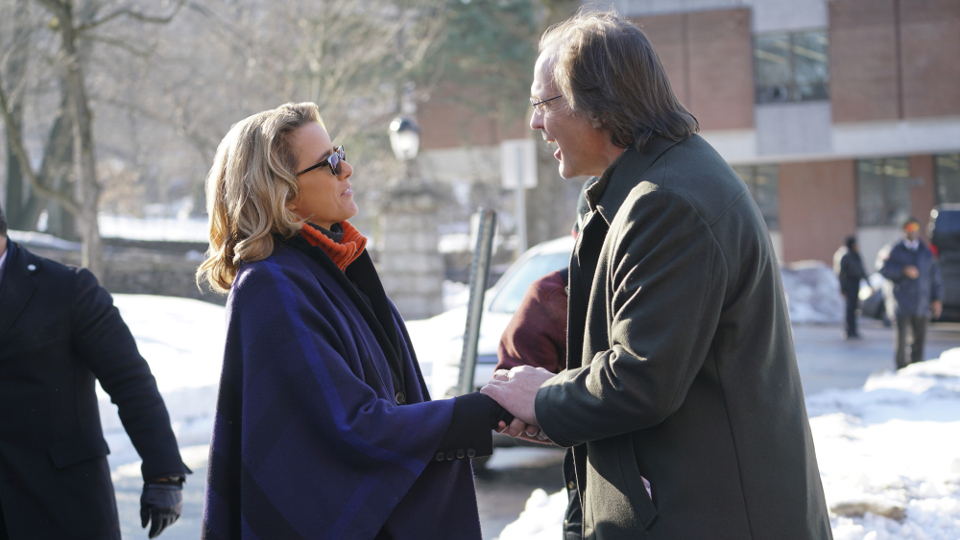 The latest episode of Madam Secretary opened up with a boat carrying over 200 refugees getting into difficulty during a storm. They were heading for Italy and radioed for help but told no help would come as it was too dangerous. The crew decided it was time to throw people overboard but one man claimed he had intel on terrorist Jibral Disah. A second appeal for help with the new information made the Italians change their mind and the boat and refugees were saved.

Elizabeth (Téa Leoni) was given 20 minutes to decide if the US wanted to interrogate the man or not. After a short debate, with some help from Russell Jackson, they decided it was worth a shot. Helping with the interrogation was Henry (Tim Daly) and his new team who were tasked with tracking Jibral Disah down.

The interrogation was done via video link with a translator. The man claimed to have seen Jibral Disah when he was forced to go to the desert to fix a car for him. After more questions he revealed that he though Disah was with a wife and that the car had red clay on its tyres.

The Americans decided he was lying to save himself and passed him back to the Italians. They were then going to send all the refugees back to Libya.

Henry then uncovered information that suggested that the man was telling the truth. They upset the Italians and told them not to take them back to Libya. They agreed but said that the refugees were now a problem for America to deal with.

Henry’s source told them he would provide more information on Disah for $5 million in cash. The Americans reluctantly agreed as it seemed like a chance worth taking. Mimi, one of the women on Henry’s team was sent with the cash to talk with the informant.

However things went bad when he turned up to the meeting and promptly exploded killing himself, Mimi and the soldiers with her.

Henry’s spent a lot of time analyzing the suicide footage and realised that the bomb was detonated remotely. He also deciphered the last word shouted by the bomber to be ‘Hijriyyah’. They then discovered that she was the daughter of a Warlord who pledged his allegiance to Disah. They suspected that she was now his third wife and the plan is for Henry’s team to track her down to get to him.

Elsewhere in the episode, Elizabeth had to deal with a senator who wanted to sue President Dalton for trying to bring the refugees to America.

Also Stevie has another new boyfriend, this time a British chap called Jareth. Her parents both failed to turn up to a dinner she arranged so they could meet him. However he arrived at the house the next morning with scones and they seemed impressed.

The next episode of season two is Higher Learning. While Elizabeth accompanies Alison on a college campus tour, she becomes embroiled in both campus and international protests surrounding a Chilean mining operation, as the American and Chilean governments come under fire. Also, Henry, Jane Fellows and Jose Campos attempt to track down Jibral Disah’s third wife, Hijriyyah.