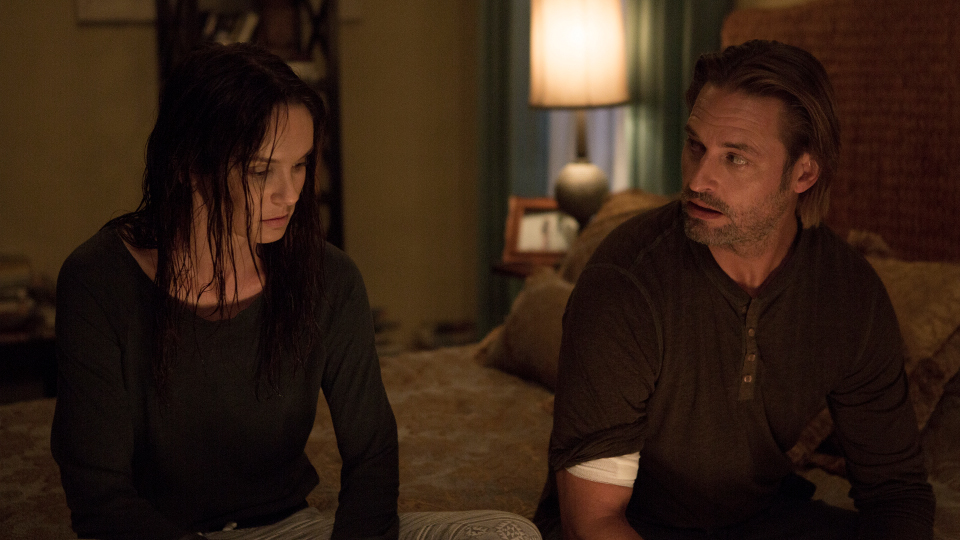 The latest episode of Colony, opened up by showing how the Geronimo propoganda posters were distributed. The teenagers receiving them then set about plastering them all over the city.

Will (Josh Holloway) was woken up early by his wife Katie (Sarah Wayne Callies) redecorating the room where the fire took place last episode. His partner Beau (Carl Weathers) turned up and asked to talk with Will in private. Katie said she would take a shower so they could talk but listened in. She was shocked to learn that the information she gave the resistance had resulted in Phyllis being killed.

Will and Beau went to investigate the crime scene and Jennifer (Kathleen Rose Perkins) filled them in. She also showed them a wall with Geronimo spray-painted on it. Proxy Snyder (Peter Jacobson) turned up to tell them how bad the situation was and told Will to catch Geronimo. Jennifer took a call telling them about the teenager captured at the poster drop site.

Will went to interview him and told him to co-operate or he and his family would end up at the factory. His intel led them to a house in the Green Zone.

Katie met with Broussard (Tory Kittles) to report about Phyllis being killed. Broussard confirmed that he knew as he had killed her.

Will and the Red Hats raided the house in the Green Zone and initially found nothing. Until Will spotted an unusually large Apocalypse Now poster. Closer examination revealed a hidden room behind it. There they found a man and a woman with marketing backgrounds who had been creating the posters. They confirmed that they were Geronimo.

Snyder put an announcement out that Geronimo had been captured after raiding his HQ and killing his lieutenants. He then went to talk with Will where he was upset when he saw who had been captured. He interrogated them where they reconfirmed that they were Geronimo. Will pushed Snyder again for help with his missing son but was told that it would be a complex process. Will was then given the job that Phyllis had previously held.

Katie went back to the Resistance where an announcement was made about Geronimo being captured. They were told to prepare themselves for war.

Will called on Jennifer where he accused her of leaking information. She told Will the theory that Phyllis had about Katie which made Will think. He went home and questioned the nanny about the day of the fire.

At the Yonk, Will spoke to Katie and told her about the death of Phyllis. She lied to his face about not telling anyone about Phyllis and her meeting with her. Will returned to the Yonk at night to have a search around for anything strange. In a wall vent he uncovered a tin where Katie was keeping private things.

Snyder realised he had no big Geronimo leader to offer up to his bosses. So he approached Luis Ortega (the broadcast guy they captured) about becoming a patsy. He promised if he pretended to be Geronimo he’d spare his life, keep him out of the Factory and get him transferred to another Colony. Luis agreed.

After a trial, Snyder went back on his word and sentenced Luis to death. He was gagged and taken outside the court where he was hanged.

Elsewhere in the episode Pia (Libe Barer) took Bram (Alex Neustaedter) beyond the wall. She said she’d been outside 11 times and took him to a distribution center. It was filled with all kinds of products that are impossible to find inside the wall. Bram found coffee and Pia kissed him. He also took some markers for his sister Gracie and lied to his father that he had traded oranges at school for them.

Bram also visited his teacher Mr. Carson and offered to help him get parts for his telescope. If they can complete the telescope they think they’ll be able to see what is really going on in the skies.

At the end of the episode Snyder asked Will to join him in his car as he had someone for him to meet. Katie was off with the Resistance getting ready for their next big mission.

The next episode is Yoknapatawpha. Allegiances are tested when Will and Katie find themselves trapped with Proxy Snyder. They also learn some shocking news about their son.

Tune into Sky 1 at 9pm on Thursday to watch the episode. Preview episode 6 with our gallery below: