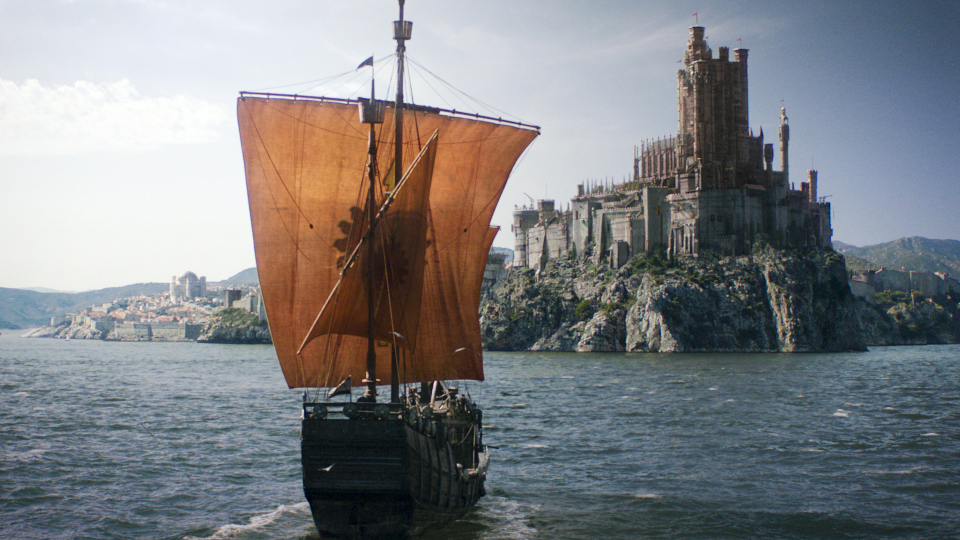 The agonising wait is finally over as Game of Thrones has returned for its sixth season. Season five was the best yet but left fans desperate to find out the fate of Jon Snow. We’re already wondering which characters will still be with us at the end of season six?

If you haven’t seen the Game of Thrones season 6 premiere yet and don’t want anything spoiled then please stop reading now. If you are up-to-date and want to relive the action then keep on reading.

We mentioned our predictions for the episode in our season 6 premiere preview. While some of them were right it seems that we’re going to have to wait for next episode to find out more.

The season opened up at the Wall as we saw Lord Commander Jon Snow’s (Kit Harington) lifeless body lay on the frozen ground. The only sound was that of his Direwolf Ghost howling and trying to get out to his Master. Ser Davos Seaworth (Liam Cunningham) was the first alive character to appear as he noticed Jon’s body lying on the ground in a pool of blood next to the Traitor sign left by his former brothers.

Davos sought help from Jon’s friends and they hurriedly carried him inside. We were told he was dead and he certainly is (at least for the moment right?). Melisandre (Carice van Houten) soon turned up to join them and Edd (Ben Crompton) went to free Ghost as Davos suggested they needed all the help they could get.

Melisandre commented that she had seen Jon in her flames, fighting at Winterfell. Sadly she didn’t get to resurrecting him. Realising they needed more help Davos sent Edd off, presumably to return with the Wildlings that Jon helped save.

Meanwhile Ser Alliser Thorne (Owen Teale) was holding a meeting to tell the Night’s Watch of Lord Commander Jon Snow’s murder. He explained that Jon had done what he thought right but it was going to destroy the Night’s Watch. He admitted that he and the other officers had killed Jon.

In the North Ramsay Bolton (Iwan Rheon) sat by the side of his dead love Myranda (Charlotte Hope). A rare moment of kindness for Ramsay soon changed when he suggested her body be fed to the hounds rather than buried or burnt.

Roose Bolton (Michael McElhatton) was feeling pretty pleased at defeating Stannis, who he confirmed is dead. He was unhappy with Ramsay though for losing Sansa Stark (Sophie Turner) and Theon Greyjoy (Alfie Allen). Ramsay was feeling confident that they would be recaptured soon as he had his men hunting them down with hounds.

On the run from Bolton soldiers, Sansa and Theon had to rely on their survival instincts to stay alive. The pair looked exhausted as they ran for their lives. They came upon a freezing river and Theon forced Sansa to cross saying it was the only way and better than being ripped apart by the dogs.

They made it safely across and rested a moment, trying to keep each other warm. Just when it looked like something might go right for Sansa, Bolton’s men arrived. Theon told Sansa to continue North while he tried a distraction by telling them Sansa had died. They didn’t believe him and she was soon found.

Suddenly Brienne (Gwendoline Christie) and Podrick (Daniel Portman) appeared out of nowhere on horseback. As they exclaimed ‘It’s a bloody woman!’ the pair made short work of Bolton’s men. Brienne then offered Sansa her services once more and this time she agreed.

In King’s Landing, Jaime Lannister (Nikolaj Coster-Waldau) returneds with Myrcella Baratheon’s (Nell Tiger Free) body. He was met by a distraught Cersei Lannister (Lena Headey) as her new improved The Mountain bodyguard looked on. Cersei didn’t blame Jaime as she confessed to knowing her children would die thanks to the prophecy she was told when she was younger by a witch. Jaime suggested they fuck everything and everyone and promises to take it all back.

Margaery (Natalie Dormer) was still imprisoned by the High Sparrow (Jonathon Pryce). She was seen being urged to confess her sins by Septa Unella (Hannah Waddingham). The High Sparrow came to visit her and she said that she had nothing to confess, wanting to know news of her brother.

In Dorne, Prince Doran (Alexander Siddig) was talking with Ellaria Sand (Indira Varma) when he received a message. It told him the news of Myrcella’s death but before he could react Ellaria had stabbed him through the heart. Her daughter Tyene Sand (Rosabell Laurenti Sellers) made short work of his bodyguard.

Nymeria Sand (Jessica Henwick) and Obara Sand (Keisha Castle-Hughes) were sent to deal with Trystane Martell (Toby Sebastian). The let him choose who to fight and he picked Nymeria. Before the fight began he was stabbed through the back of the head by Obara with her spear. Nymeria accused her of being a greedy bitch.

Across the Narrow Sea in Meereen, Lord Varys (Conleth Hill) and Tyrion Lannister (Peter Dinklage) wandered the streets. They noticed how upset the people were with Daenerys Targaryen (Emilia Clarke) abandoning them. Tyrion gave a poor woman some money to feed her baby. Shortly after they were alerted to the harbor where the entire fleet of ships had been set on fire.

Elsewhere, Jorah (Iain Glen) and Daario (Michiel Huisman) continued their search for Dany. They came across some melted ram bones before discovering the spot where Dany had been captured. Jorah found the jewellery that she had dropped and they realised it was a Dothraki khalasar who were responsible.

The action switched to Dany who was tied and forced to follow the Dothraki on foot. They talked amongst themselves with what they would do to her and even whipped her on the way to their camp.

She met with their leader Khal Moro (Joe Naufahu) who spoke of seeing a beautiful woman naked as one of the five best things in life. He told her he planned to sleep with her that night and wanted her to give him a child. Dany refused and gave him her impressive list of titles to which he laughed.

Khal Moro’s wives suggested he cut of her head (several times). It wasn’t until she mentioned she was the widow of Khal Drogo that his tone changed. Apparently it is forbidden to sleep with another Khal’s widow. Khal Moro suggests she must be taken to Vaes Dothrak to be with the other widows.

In Braavos, a now blind Arya Stark (Maisie Williams) was seen in rags begging on the street. The Waif (Faye Marsay) visited her and urged her to fight but gave her a beating with her stick. She promised to return the next day for more of the same.

The season premiere ended back at Castle Black. Thorne and his men gave Davos an ultimatum. They had until nightfall to surrender and those that did would be unharmed while Davos and Melisandre would be allowed to ride south. Davos agreed and asked for food to take with him. However he also knew that if he opened the door, Alliser would kill them all.

The final scene was Melisandre, but not what we were expecting. She undressed, which is nothing new, but then removed her necklace. After removing the necklace it was revealed that Melisandre is actually a very old woman indeed. We’re guessing that the necklace is probably magic in some way allowing her to disguise herself.

So that’s Game of Thrones season 6 underway and off to a brilliant start. Sadly we’re left with plenty of questions but hopefully we finally get to see what happens with Jon Snow. We’re expecting that Bran Stark (Isaac Hempstead Wright) and Hodor (Kristian Nairn) will be making their return next episode. Read our preview of episode two.

Let us know your thoughts on The Red Woman in the comments below as well as your hopes for the season.

View images from The Red Woman in our gallery below: