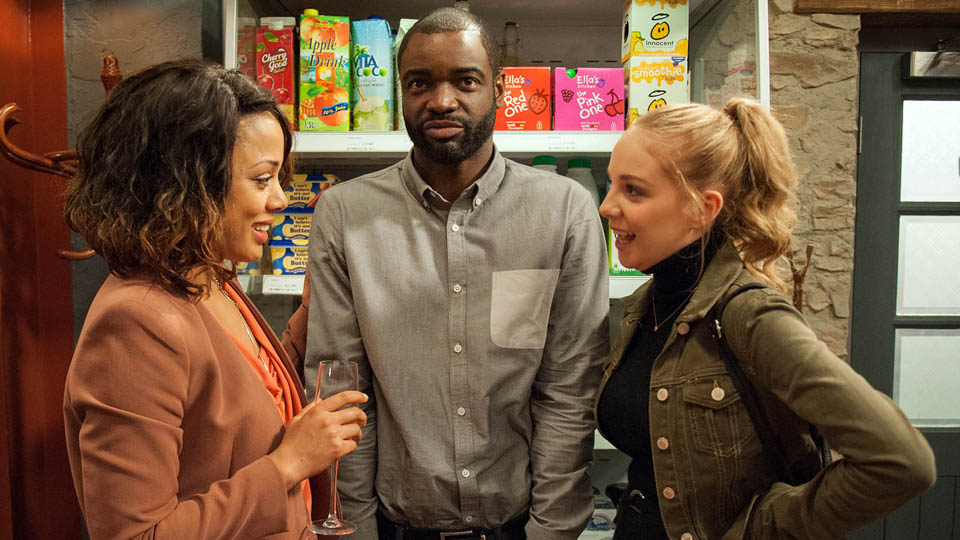 Welcome to our regular look ahead as to what’s going to happen in the lives of our favourite villagers in Emmerdale this week.

David’s struggling with his cancer news, Belle is a woman scorned and Finn regrets getting tangled up with Charity

Lisa begs Rishi to give Belle her job back and even Joanie encourages it too.  Rishi caves in and offers Belle her job back, now all she has to worry about is what to do when Lisa asks her to bring her boyfriend to tea at the pub.

Belle is happy when Dr Bailey gives her a necklace but their date is cut short when he gets a call about a house visit;  the Dingle’s house.  Lisa has had an angina attack and Dr Bailey heads to tend to her.  Whilst there he sees a picture of Belle in her school uniform, but will the penny drop about Belle’s age and how will Belle feel about him having been at her house?

Later, Belle jumps at the chance to go to the surgery and get Lisa’s prescription as Dr Bailey has been suspiciously ignoring her texts.  He quickly takes her into his office and asks her to come clean;  can she explain herself out of this one?

Megan has arranged a fundraiser for the baby unit and Dr Bailey can hardly watch as Belle talks to his oblivious wife Angie.  Belle is enjoying toying with him and getting a rise out of him and may have told Angie about their affair had Lisa not interrupted them.  Undeterred, Belle seeks help from the master of revenge by enlisting Charity to help her.

Angie is about to set off when she finds a lipstick that Belle has placed in the back of the car leaving Dr Bailey with some explaining to do.  Dr Bailey heads to tell Belle it’s all over, but when he gets there, it’s clear he’s wrestling with his emotions.  Which way will he go?

Can David go through with the operation?

Tracy is still smarting over David’s apparent rejection, but is later shocked to learn from Eric that David has cancer.  With a new hope, she tells David she fancies him and soon the pair are locking lips.  The morning after and David is fuming to learn that she knows about his cancer and thinks she slept with him out of pity.   He takes it out on Eric and storms off.

Eric is worried about David as he’s not answering his phone and he’s taken some booze and he lets himself in to David’s place to find him naked and drunk.  Eric urges David to go ahead with the planned operation and goes to the hospital to support him;  both men hiding their fears.  Meanwhile, back in the village, Tracy panics to see Jacob back from Portugal and wondering where David is.

Enthused by his new found skill of selling action figures, Finn is thinking of leaving the B&B.  However, Ross is less than happy when he realises that Charity has got Finn involved in their dodgy goods, but she reassures him it’s low risk.  After a comic convention in Leeds is cancelled, Finn gets an idea;  he’s going to host his own comic convention in the village hall.

Ross is fuming when Finn gets arrested for handling stolen goods and James and Emma despair when they find out Ross was in on the deal with Charity.  Finn is adamant that he won’t get a criminal record and Charity and Ross can only watch in horror as Finn shows the police into Dale View.  Lucky for them he decides to keep their names out of it….for a price.

Finn hands his notice in at the B&B and set up his own taxi firm to an underwhelming response from Victoria and Holly.  It seems that he has an ulterior motive in that he wants something for Pete to get involved in when he comes home from prison.  He’s gutted when Adam tells him he might not get a license due to his criminal record.  How can Ross make it up to his little brother?

Jimmy helps Megan by looking after baby Eliza and Jai is chuffed to see his daughter smile as he joins the pair.  It seems their male bonding has worked as Jimmy suggests to Megan she should let Jai look after Eliza and she decides to chat to him about it.  It looks like the pair are building bridges, but has Jai got the wrong idea about where this could be heading?

Rhona is clearly enjoying having Pierce around and is frustrated when Paddy calls her wanting to talk to Leo.  Later in the week, Pierce looks after Leo and Marlon is unimpressed, especially when he learns that he’s told Paddy not to call Rhona’s house any more.

Priya’s amused by Rakesh’s confidence as he watches a DIY tutorial.

Has Holly got a crush on Cain?  She bails him out this week when he forgets Moira’s birthday, going with him to buy her a lovely necklace.

Cain’s rattled when Charity teases him about Pete’s return.

Harriet spots a mistake with Ashley’s accounting work and his confidence plummets and he storms out. Harriet racks her brains to come up with a way of restoring his confidence.