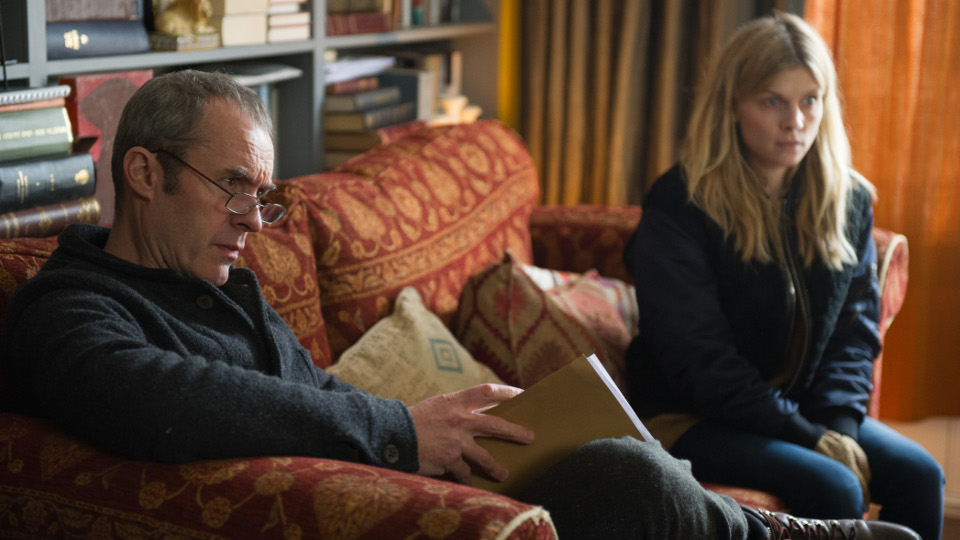 On the latest episode of The Tunnel: Sabotage, Karl (Stephen Dillane) decided to take up the offer of returning to the CID. He was put in charge of the UK’s investigation into the Channel Tunnel abduction and plane crash.

In France, Elise (Clémence Poésy) listened to the audio of the plane crash and they were able to determine that the autopilot of the plane had been controlled remotely. The plane had been forced to climb until it stalled and crashed back down. It was suggested that for such a hack to take place the attackers would need someone on the plane.

The expert who could have helped explain the plane crash was Madeleine Fournier – one of the couple abducted from the Tunnel. Elise was put on both cases and told not to tell Karl about the plane hack.

Elise met up with Karl and they went to inspect the plane crash wreckage. The passenger list revealed that there was a Judge on board and that his assistant had failed to board at the last moment.

They then went to visit the burnt out van and forensics were able to identify a Kernow (Cornwall) sticker. It was also revealed that the blood found in the underpass near the van belonged to Robert Fournier so they presumed him dead.

Meanwhile the terrorist group led by Robert Fournier prepared their next operation. They planned to target a religious gathering of multiple faiths and kill one of each faith. Their quest appears to be against religion due to the problems it can cause. They feel only violence will make the world take notice.

Back in France, Chloé Fournier, the little girl left in the Tunnel when her parents were abducted, started to talk again. During the abduction of her parents she remembered hearing someone say ‘Not the Kid!’. Elise felt this was an important clue. Karl and Elise then headed back to the UK due to a sighting of the van on CCTV.

After the van was confirmed as stolen they were able to pinpoint a stolen credit card used at an oil depot. One of the employee’s at the oil depot was able to give a description of the girl who used the credit card.

A lone shooter from the terrorist group launched his attack on the religious gathering. He walked around calmly shooting one person of each faith. He appeared to have escaped before police and ambulance arrived on the scene.

At the end of the episode the description of the girl who used the stolen credit card was released to the public and was recognised by her father.

On the next episode of The Tunnel: Sabotage the hunt for the abducted couple continues. A hunch leads Karl to another body. Plus, a man steps forward with intriguing links to their missing man.