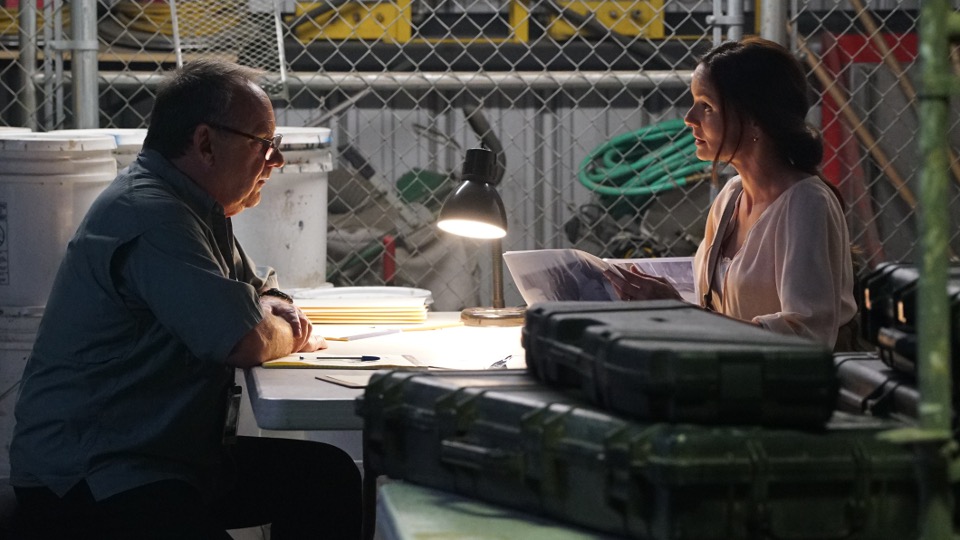 The latest episode of Colony, opened up with a Resistance member broadcasting information to people under occupation and urging them to rise up and join the Resistance. The Red Hats frantically tried to track him down but he had moved on before they could get to him.

Katie (Sarah Wayne Callies) went on her first mission with the Resistance to hijack a supply truck. After stopping the truck, using a dummy on a bike, things went wrong when more civilians got involved. A gun battle ensued and one of the Resistance was shot so Katie tried to administer first aid. Broussard shot him dead as they had no time to move him.

The main aim of the mission was to time how long it took for the alien drones to respond – Katie clocked them at 98 seconds. Upon arriving the drones killed all civilians present.

Katie rushed home traumatised and was surprised to find Will (Josh Holloway) at home. As he called her she realised she had blood on her and tried to wash it off before Will saw it. He came looking for her so she distracted him by getting naked and the pair had sex.

A little confused by Katie’s strange behaviour, Will confronted her about it. However she mostly ignored him and blamed things on their missing son.

Will and Beau are given the task of investigating the truck hijacking. After trying to piece together the story they realised that one of the bodies was a Resistance member that had been executed. Tracking down his home they discovered his parents lived there and sent them to the Factory.

Katie is told to get the information out of Will about what they know of the hijack. It’s an easier job than she was expecting as Will is upset over what happened. He confides in Katie and tells her of a database he’s hoping to gain access to in an effort to track down their missing son.

Elsewhere it was shown that their son Bram was recording the Resistance broadcasts and collaborating with a teacher at school. The teacher was also interested in monitoring the alien spacecraft launches. Bram later went off with a friend named Pia who showed him a secret path under the wall.

The next episode is Blind Spot. Will continues to earn his colleagues’ respect but when his home comes under attack, everyone comes under suspect, including Katie.

Tune into Sky 1 at 9pm on Thursday to watch the episode. Preview episode 4 with our gallery below: