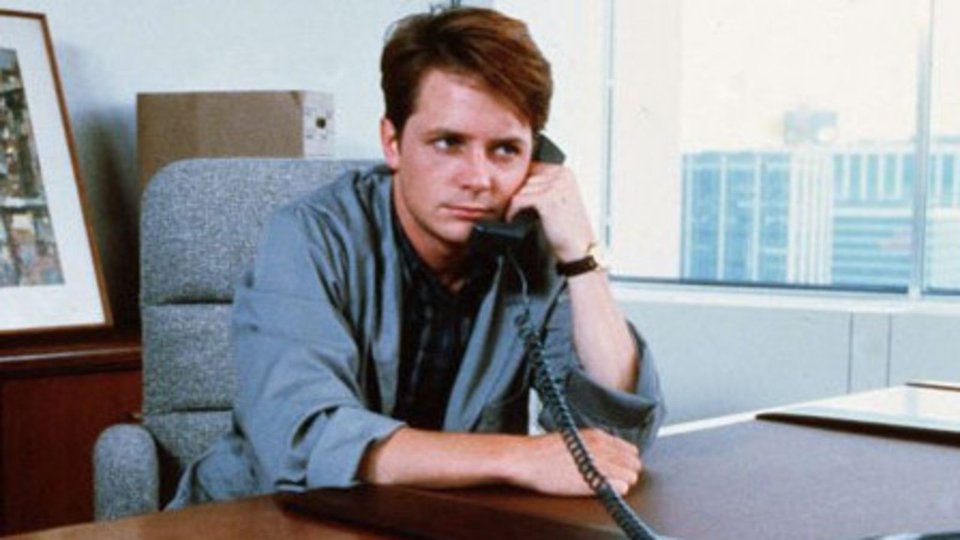 If your favourite genre of film is “annoying assholes trying to get rich in the 80s” then this is the film for you. If you are a normal person, with a soul, and/or taste in movies, then this probably isn’t going to be your cup of tea.

Just in case I slightly buried the lead, let me be categorically clear about this film: I hated it. It is a vile, wealth and status obsessed, Reaganite wet dream. Thematically repugnant, poorly made, and dripping with grotesque 80s attitudes.

The film opens with college graduate Brantley Foster (Michael J. Fox) struggling to find work in New York City. He hasn’t got enough practical experience, and no one will give him a chance to earn any. This sequence is played for laughs. I guess in 1987, spending four years of your life studying, and building up tens of thousands of dollars of debt and not being able to get a job at the end of it is hilariously funny. LOOOOL.

With no other alternatives, he is forced to take the only job he can get, which is in the mailroom of his Uncle’s corporation. Here he meets love interest Christy (Helen Slater sporting a terrible Princess Di hairdo), who is introduced in a preposterous dream sequence. This is one of many bizarre choices made by the director, Herbert Ross. There are too many to list, but the weird lip close-ups and overuse of the “Oh Yeah” song by Yello both stood out.

The film is a complete mess. It frequently switches genres, and goes through a number of dramatic tonal shifts. Is it a comedy? Is it a boardroom drama? Is it a rom-com? Is it a sex farce? Is it any good? No, it’s rubbish.

Anyway – SPOILER ALERT – he pulls himself out of the mailroom, with nothing other than moxie, a power tie, and a good line in bullshit, and makes it all the way to the top. Hooray for Brantley. He fulfills the yuppie fantasy. How inspiring this must have been to a generation of cinemagoers.

It really goes to show what a difference a script makes. Two years earlier, and Michael J. Fox is making Back to the Future – a timeless classic that still looks good today, and establishes him as one of the most likeable and bankable stars on the planet. Even with all that goodwill behind him, this script portrays him as such a vile little twerp, you can’t help but hate him. This film is SO BAD it makes Michael J. Fox unlikeable. Think about that.

Speaking of the script, I’d like to talk about the “heroes journey” – that mythological structure that underpins nearly every story, and is something of a bible to all screenwriters. The basics of this journey are as follows: we start in a status quo for the hero. Then there is a disturbance to this status quo that sends them on their journey. Along the way they encounter trials. Meet a wise mentor who will guide them. There will then be a final confrontation, leading to a new status quo.

In Brantley’s journey, he wants to be a big shot executive, but has to work in a mailroom with all the working class schlubs. One would think – if the screenwriters had any trace of humanity – that part of the new status quo would be Brantley learning something of value from his time in the mailroom. Maybe the wise mentor would be his boss in the mailroom, and in the end he would eschew the trappings of executive lifestyle, and find something in life that is more than just status and material wealth.

Well if you did think that you’d be wrong. So morally bankrupt is this film, that Brantley’s working class boss from the mailroom ends up as his limo driver, taking a newly minted, tuxedo wearing Brantley to the Opera with his two lovers – one of whom is his Aunty.

In this article:Helen Slater, Michael J Fox, The Secret of My Success