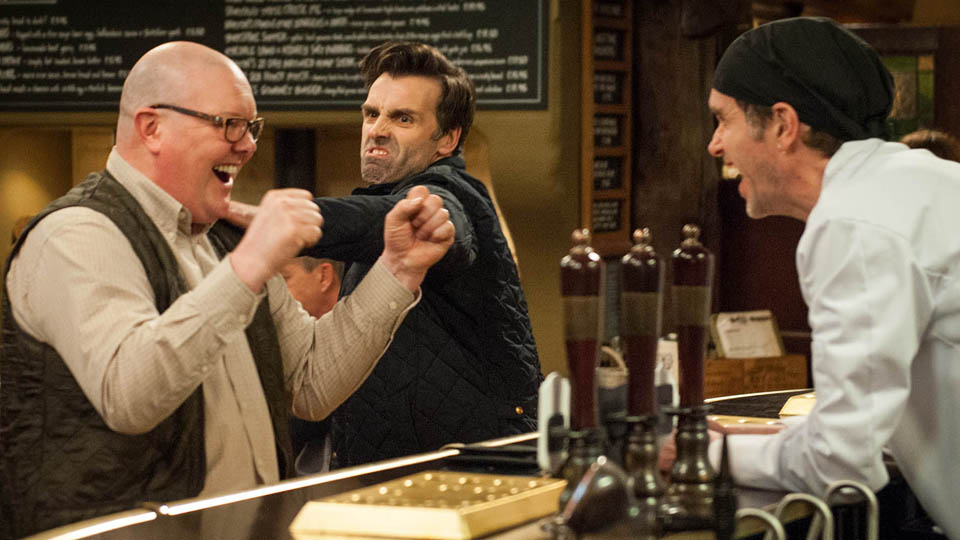 Paddy is floored, Charity up to her old tricks and a familiar face returns.  It can only be our look ahead at what’s happening in Emmerdale this week.  Read on…

An unsuspecting Paddy gets punched

Paddy and Rhona agree to meet for lunch and seem happy that they are beginning to make some progress patching up their marriage.  Paddy suggests they go to Paris for the weekend, but the pair are interrupted by Tess’ widower Pierce who asks if Tess was having an affair.  He has found Tess’ second phone and Paddy is horrified when Rhona agrees to talk to him tomorrow.

At the meet up the next day, Rhona struggles as she reads Tess’ texts from Paddy and she blurts out to Pierce that it was Paddy who Tess was having the affair with.  Pierce storms into The Woolpack and heads straight for Paddy, who is chatting to Marlon.  Out of nowhere, he punches him hard and it knocks him to the floor and Aaron has to step in to hold Pierce back.

Paddy is miserable and thinks that he and Rhona are over for good.  Marlon steps in to try to help and pleads with Rhona to talk to Paddy.  Vanessa is dumbfounded when she learns of the affair and even more shocked to see Rhona still proceeding with the adoption plans.  Rhona even asks Paddy to come around and present a united front for the social worker’s visit.

Nicola is pleased with herself when she thinks Charity has fallen for a fake set of Home James haulage accounts, but Charity isn’t that stupid is she?  It seems Charity is up to something and Ross is involved, much to Cain’s annoyance as he realises the pair are up to dodgy dealings.

Charity’s driver, Jez arrives at Moira’s farm with some items and Charity rubs her hands with glee at all the cash she’s making.  She’s in for a shock though, as when she goes to the barn she finds it empty, except for Cain that is!  He warns her off working with Ross and she stomps off in search of Jimmy and Nicola.  They beg Charity not to sell her share of the haulage firm.

After arguing with Moira about Charity hiding her swag in their barn, Cain’s fuming to realise his car is missing.  He is convinced that Ross is behind it and in the pub Charity and Ross accuse each other.  Soon, Cain spots his car as it speeds past him and urges Moira to take pursuit.  As they catch up to it, it skids to a halt and the thief is revealed.

Joanie has to swallow her pride as she asks for a job at the factory, leaving Belle and Lisa in disbelief when they see her there.  Lisa challenges her and Joanie explains she has no choice;  she needs money to look after little Kyle.  To make matters worse, the pair have been given the same shift pattern.

A desperate Lisa comes up with a solution;  she’ll sell the house so Zak and Joanie can be on their way once and for all.  She reassures Belle they’ll find somewhere else to live, but Belle is against the idea and confides Lisa’s plan to Chas.  Joanie tries to tell Zak that Lisa selling the house is a good idea.

Holly Barton returns, but it looks like she’s back for more than just seeing the family.  As she takes a phone call outside the pub, she promises to get the money she owes.  Just how does Charity fit in to her plans?

Liv continues to help her dad, Gordon by giving him information about Aaron and Robert, hoping that it will help him get off the charges he’s facing.

Chrissie’s pleased when Lawrence agrees to keep Andy on at Home Farm.  Andy offers her a supportive ear as she worries about her divorce settlement meeting and how much Robert will want.

Jai is put out when a delighted Megan brings home Eliza, but tells him they are just fine on their own.