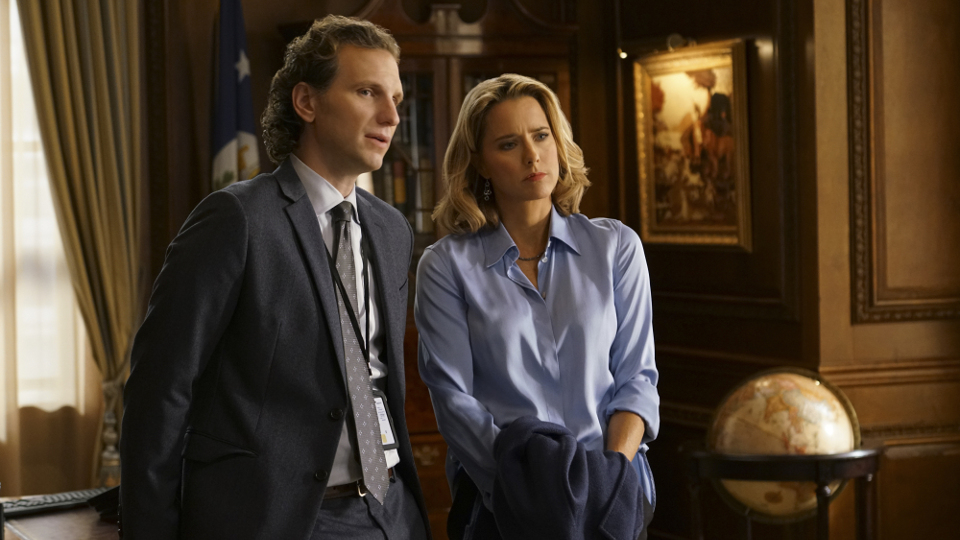 In the latest episode of Madam Secretary, Elizabeth (Téa Leoni) finally got to take down Craig Sterling.

The episode opened up with the US tracking down the hacker behind the Air Force One hack. He was hiding out in Cambodia and they had just 48 hours to get to him. Sterling suggested going in guns blazing with a Navy Seal team but Elizabeth wanted to go with a CIA Black Ops team.

Sterling always wants the more dangerous options and although his idea would be quicker it risks causing a huge diplomatic crisis. President Dalton eventually decides to go with Elizabeth which really pissed Sterling off.

When the Black Ops team finally arrive they find that the hacker has been poisoned with Polonium. Dalton is sue that it’s a sign that the Russians were behind it as they have been known to use radiation poisoning before.

Unhappy with Sterling and wanting him out Russell Jackson teamed up with Elizabeth and Mike B. to take him down. Jackson pretended to be on Sterling’s side and even told him that he didn’t like Elizabeth. He suggested that Sterling back General Reeves to replace Admiral Ellen Hill.

Meanwhile Mike B. spooked Senator Parisi by asking for his schedule. This sent Parisi running to Sterling.

Mike B. then had a journalist friend leak news that Sterling had been bribed by Reeves. Sterling realised that the bribe leak was at the same time as he met Parisi and so decided to shred his planner to hide the evidence.

This played right into Jackson and Elizabeth’s plans as it’s a crime to shred official White House documents. They gave Sterling the option to resign or be arrested so he chose to resign.

Elsewhere in the episode Dmitri was headed back to Moscow. Henry (Tim Daly) assured him that he would do whatever he could to keep him safe. Upon arriving he was to go to a particular toilet stall to retrieve a safe phone so he could stay in contact. However he was intercepted by the Russian military and couldn’t get to the phone.

With Dmitri out of touch, the DIA wanted to abandon him as a lost asset. Henry insisted they give him more time and eventually Dmitri got back in touch. He managed to lose the agents following him by visiting a prostitute and used her phone. He also arranged a drop of documents detailing Maria Ostrov’s plans.

At the end of the episode Dalton decided to retaliate against Russia for the Air Force One hack. He decided to go all out and knocked out their power grid. When the power went out Dmitri was trying to flee the country via train. Things are sure to escalate between Russia and the US next episode.

The next episode of season two is Russian Roulette. Shortly before Elizabeth is set to deliver a speech at the UN accusing Russia for the attack of Air Force One, Henry shares information with her that makes her question the theory.