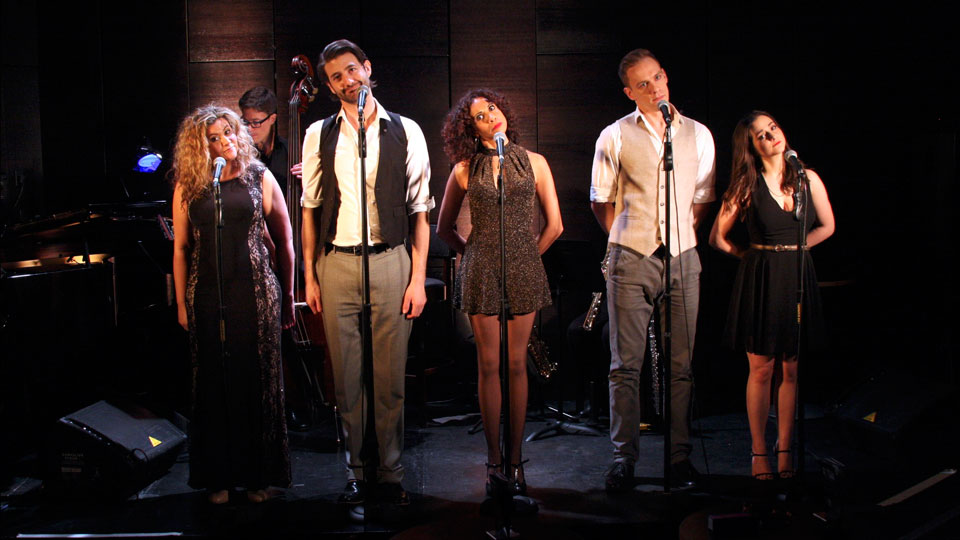 Transferring from a short run at the Pheasantry in Chelsea, The World Goes ‘Round is a belting homage to Broadway legends Broadway greats John Kander and Fred Ebb.

The duo is responsible for some of musical theatre’s most enduring songs, from Cabaret to Chicago. All of the hits, plus a few lesser-known numbers, are given a confident airing in this intimate production.

The cast, led by Debbie Kurup, recently seen in The Bodyguard and West End star Oliver Tompsett (Rock of Ages, Wicked) is electric. The five unique voices blend to create some of the night’s most magical moments, with original harmonies breathing new life into musical staples.

As well as having a powerhouse voice, Kurup brings real wit and seduction to the stage. Whether belting out All That Jazz or providing comic relief to The Rink, Kurup consistently delivers with a magnetic stage presence and controlled, powerful vocals. Tompsett matches his leading lady every step of the way, with one of the richest male vocals we’ve ever heard. The singer’s tone is something special and showcased best on Kiss of the Spider Woman.

Steffan Lloyd-Evans, Sally Samad and Alexandra Da Silva were all given their chance to shine throughout the production (Ring The Bells, being a particular, barn-storming highlight) – there was no weak link on this stage.

The performers were ably backed by a tight band, led by Kris Rawlinson.

Missing was the choreography we’ve come to associate with the likes of Chicago. The cramped stage couldn’t fit a swinging cat, let alone a Fosse number, so there was little the cast could do to bring the songs to life. Thankfully their voices and characterisations were more than enough to do Kander and Ebb justice.

Only playing for a limited run in St James Theatre’s fantastic studio space, fans of musical theatre will find plenty to enjoy in this witty and slick production.