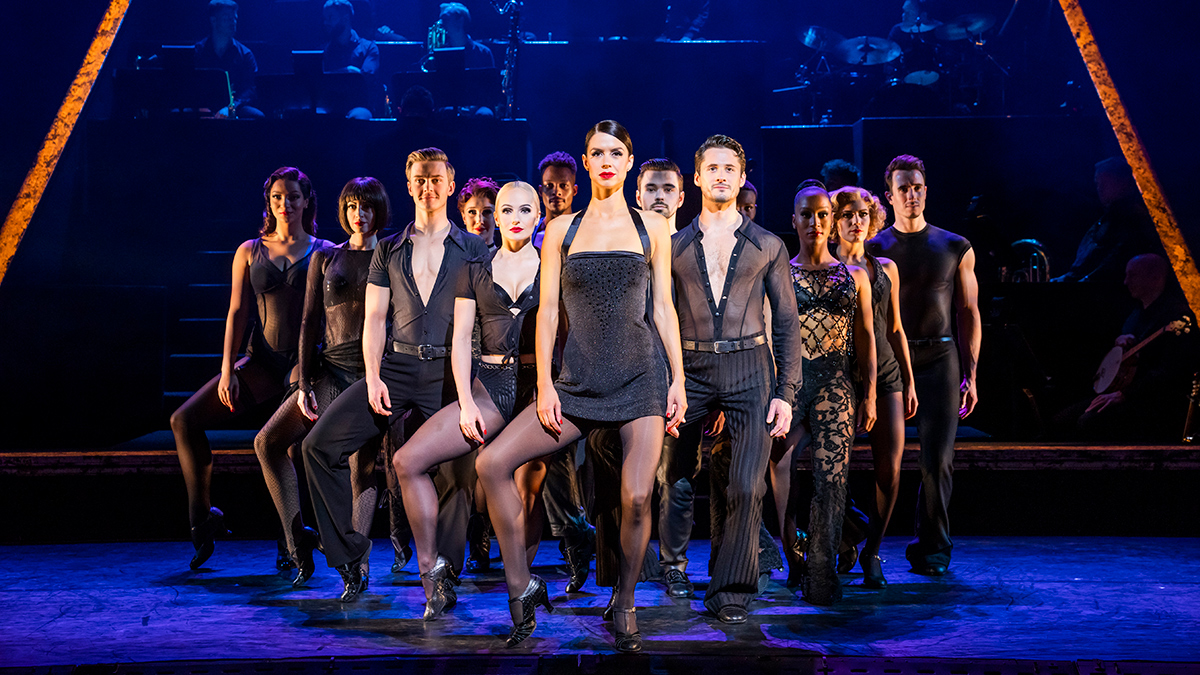 The smash hit 1975 musical set in the American Jazz Age is enjoying a sensational tour, and plays at the Churchill Theatre Bromley this week.

A packed house arrived last night to be transported back to the 1920s and to the seedy world of urban criminality, and they weren’t disappointed. This production of ‘Chicago’ justly positions the band on the stage with the actors, forcing all of the action downstage. This accentuates the effectiveness of the live music, and the ‘vaudeville’ feeling that it evokes. It also gives the performers no corners to hide in – but thankfully, along with Bob Fosse-inspired choreography, the cast carries it off with aplomb.

When the glamorous Roxie (Faye Brookes) kills the man she’s been having an affair with, she convinces her dullard husband Amos to take the fall, claiming that the dead man was a burglar. When her story doesn’t stack up, she’s arrested and incarcerated in Cook County Jail. There, her fellow inmates comprise female killers, including celebrated vaudevillian Velma Kelly (Djalenga Scott). Prison guard Mama (Sinitta Malone) controls who has access to the inmates, and so moderates the flow of press and lawyers. Because of that, she exercises control over the women. Hot shot lawyer Billy Flynn (Darren Day) is representing both Velma and Roxie, who ultimately find that their ambitions elide.

‘Chicago’ makes commentary on the vacuous search for celebrity status. Whereas these days, Roxie and Velma would vie for fame by pursuing reality TV, in 1920s Chicago they conspired to have journalists giving them column inches through the notoriety of their crimes. Human nature doesn’t change. The show doesn’t take itself too seriously, though. The characters are intriguing through their immorality (as unrepentant female killers) or amorality (Billy Flynn is manipulative, vain and avaricious). Yet there is plenty of humour in the book, and director Walter Bobbie ably brings this to the forefront without ever allowing it to threaten the credibility of the world so compellingly created on stage.

The performances are universally excellent. Faye Brookes makes the part of Roxie her own, even eschewing the peroxide blonde hair so synonymous with the character. Somehow, she keeps Roxie sympathetic. Djalenga Scott is the perfect foil for Brookes, and her height is what offers a contrast. They spark brilliantly off one another on stage, especially in their showstoppers together such as ‘My Own Best Friend’ and ‘Hot Honey Rag’. It’s unusual for musicals to offer two strong and memorable leading parts to women, and it’s one of the features that makes ‘Chicago’ so special. Sinitta Malone is in excellent voice and raises a good few laughs as the brassy Mama. In the leading male part, Darren Day brings his wealth of experience to playing Billy Flynn with an icy cool charm, with the trick being how effortless he makes it all seem.

The hit songs are incredibly well-known, but you cannot beat the experience of hearing them live, embodied by confident and talented actors and flawlessly performed by musicians. From the opening of ‘All that Jazz’ to the confessional ‘Cell Block Tango V’ and the drama of ‘Razzle Dazzle’, the earthiness and aftertaste of sleaze evoked by the music keeps audiences enraptured. Using the conductor as a character periodically throughout the show is one of its many charms, and the orchestra really gets the audience going at the start of the second act when they have the stage to themselves. When it’s packed with actors, stunning choreography throughout ensures that ‘Chicago’ is a feast for the eyes as well as the ears.

Slick, sexy and relentlessly entertaining, this production of ‘Chicago’ is not to be missed. Top marks for carrying everything off with such unstoppable verve and style.