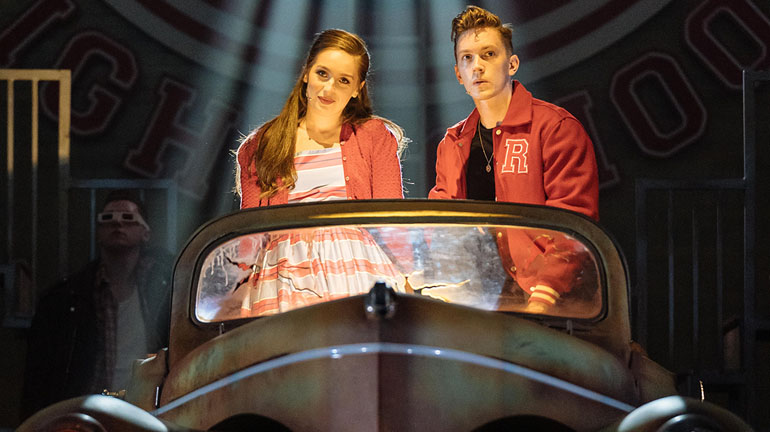 For the first time in 25 years, Grease is back in an all-new production opening at Leeds Grand Theatre ahead of a national tour.

Since the 1978 movie that defined the careers of Olivia Newton-John and John Travolta, Grease’s tale of high school romance told through Fifties’ rock ‘n roll has become a part of the public consciousness.

We all know the story and the songs, which is something of a blessing and a curse as far as revivals go. There’s a safe investment in the show’s ability to draw audiences to something they already know, yet a real risk of an unfavourable comparison to the established version.

That’s why Nikolai Foster’s new version attempts to do things differently. The key elements are still there, but the narrative structure and songs subvert expectation. Gone are the T-Birds of the movie, to be replaced with the original lineup of the Burger Palace Boys. The obligatory blonde Sandy is now a brunette, whilst Danny is a flaxen contrast to Travolta’s Italian ducktail. Subtle changes, but enough to sidestep the exhausted iconography of the movie, which could easily make the production feel like yet another tribute version.

Whilst the bubblegum evocation of an all-American Fifties high school abounds, the show offers a grittier, darker tone. Dramatic interludes dial down the comedy and some expansive production design takes a real-world gymnasium as its inspiration. It altogether feels less like a comic strip parody and more like a genuine teen-angst musical set against a mid-century landscape.

A large ensemble also ensures there’s constant onstage action. Dan Partridge projects a captivating Danny Zuko and showcases his soaring vocal with some energetic dance moves. The chemistry with Martha Kirby’s Sandy is evident throughout and she’s equally alluring, particularly in her near-operatic rendition of the reprise of Look at Me I’m Sandra Dee. The acid test for the pair is the Summer Nights sing-off, which establishes the whole ensemble’s strength from the off.

Many will be excited by a fleeting display from Peter Andre, who makes a guest appearance in selected performances as Teen Angel. His turn is a provocative little number, Beauty School Dropout, which is sure to sate fans who’ve waited all their adult lives to see Andre in person.

Whilst some of the new musical numbers are forgettable, a blasting arrangement from Sarah Travis with direction from Neil McDonald delivers plenty of punch with some piercing brass. The chorus breaks free in ensemble numbers such as Born To Hand Jive and Greased Lightnin’ ⁠— further enhanced by outstanding choreography from musical dance legend Arlene Phillips. This is a show which comes alive during these big numbers, handing over a genuine West End quality.

However, clocking in at some two-and-a-half hours, the dramatic waypoints feel a bit baggy. By the second act, there’s a real urge to move things on to the next song-and-dance sequence. For 2019, the dialogue seems overwritten and would have benefited from some minor surgery. It’s more a problem with the source than the production, yet the extensive achievements in the song and dance expose the drama’s lower-geared pace.

Inevitable comparisons to the hit movie aside, Grease is a welcome revival which is well on its way to greatness. If it were a beat-for-beat remake there’d less to commend it, but as a show which builds on the original concept and offers something fresh and unique, it feels like a whole new experience.

In the end, Grease The Musical is an uplifting soda pop musical buttressed with a catalogue of well-staged songs. It’s also a welcome re-appropriation of a fine show which has been overworked and underperformed on the amateur circuit. Be sure to devote yourself to this electrifyin’ and original new version to see how it’s really done, as it may be another 25 years before you see the likes again. For now, Grease is the word. Go see.