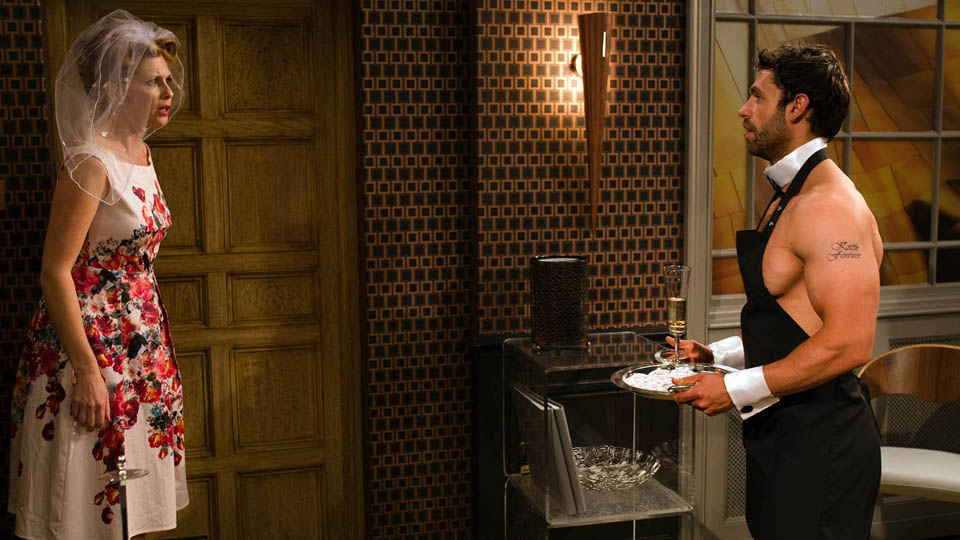 Welcome to our regular look at what’s in store for the residents of our favourite fictional Yorkshire village this week.  Ding, dong will those wedding bells chime for Bernice and Lawrence?

Will Andy stop Bernice getting married?

Kerry is determined to save Bernice from a sexless marriage with Lawrence, but Bernice is adamant the wedding will go ahead.  Kerry enlists Andy to be a topless waiter for Bernice’s Hen Do to show her what she’d be missing.  He asks Bernice if a no sex marriage is enough for her and before they know it the pair are sharing a passionate kiss.  A horrified Chrissie watches on as they leave together.

On the day of the wedding, Bernice wakes up next to Andy in the salon following a night of passion.  Victoria gets a shock when she arrives for a hair appointment and presumes this means the wedding will be cancelled.

Meanwhile, Chrissie tells Lawrence what she saw last night and he looks heartbroken as he gets ready to confront Bernice.  Much to Bernice’s surprise, Lawrence tells her he doesn’t blame her for sleeping with Andy, going on to say that if she will still marry him, he would turn a blind eye to her sleeping with other people.

Andy confides in Victoria that he thinks Bernice will leave Lawrence for him, but fears that he would only end up hurting her in the long run.  Later, he removes his wedding band and sets out, seemingly ready to take action.   Will he offer Bernice the chance at happiness with him or will she go through with marrying Lawrence?

Things are still very awkward between Chas and Diane as the latter returns from holiday.  As Chas tries to build bridges by explaining that Emma was behind the break in, they decide to call a truce, but are far from being best friends again.

James manages to track down Emma and persuades her to return to the village which does nothing for Chas’ anxiety levels when she visits the doctor’s surgery and comes face-to-face with her.  Later, when she comes into the pub, Chas loses it and asks Aaron to phone the police, but he decides against it.  Instead, him and Cain come up with a plan where Aaron will sleep downstairs in the pub in case Emma tries to break in again.

Next day, Chas awakes to find a large kitchen knife beside her bed and instantly thinks it’s Emma’s work and tells Cain.  As Cain sets about sorting Emma, Aaron interjects and tells him his concerns for his mum.  They agree to watch Emma’s house all night to appease Chas, who’s stress levels are through the roof.

In a highly agitated state, Chas heads up to bed with the knife in her hand.  She is woken by the sound of a glass smashing downstairs in the pub and creeps downstairs holding the knife.  It turns out that it’s a tipsy Diane that has come home and knocked a glass over by mistake.  Diane walks round the corner, straight into Chas who lunges at her with the knife in the darkness and is horrified when she turns on the light to see who she’s just stabbed in the stomach.

As Diane loses consciousness, Chas panics and calls Aaron and Cain back from their stake out.  When they arrive at the pub, Chas runs out leaving the pair to apply pressure to Diane’s wound before the paramedics arrive.  Diane is rushed to hospital for surgery and later wakes up to some worrying news.

After the (slightly odd!) Northern Soul dance last week, Zak moodily asked Joanie to pack her bags and leave the farm, much to her confusion.  This week it seems he hasn’t changed his mind and is very cold towards Joanie.  Dan and Kerry step up to Joanie’s defence and even Cain goes to see Zak about the situation, but will he reveal to Cain the true reason he asked her to leave?

When Joanie goes to collect her things she receives a surprising reaction from Zak.  Later in the week, Lisa returns, but can Joanie and Zak ignore what happened between them?

Harriet is still unsure why Ashley tried to split up with her.  Will she get his secret out of him?

Belle’s delighted when she gets a text from the lad, Matt, that she met at the Northern Soul party.

Nicola tries to sneak out of Jimmy’s place after spending the night and later Laurel lets slip just why Nicola’s time in Dubai was cut short.

David celebrates his birthday with Nikhil and Leyla and sets his mind on launching a deli bar.