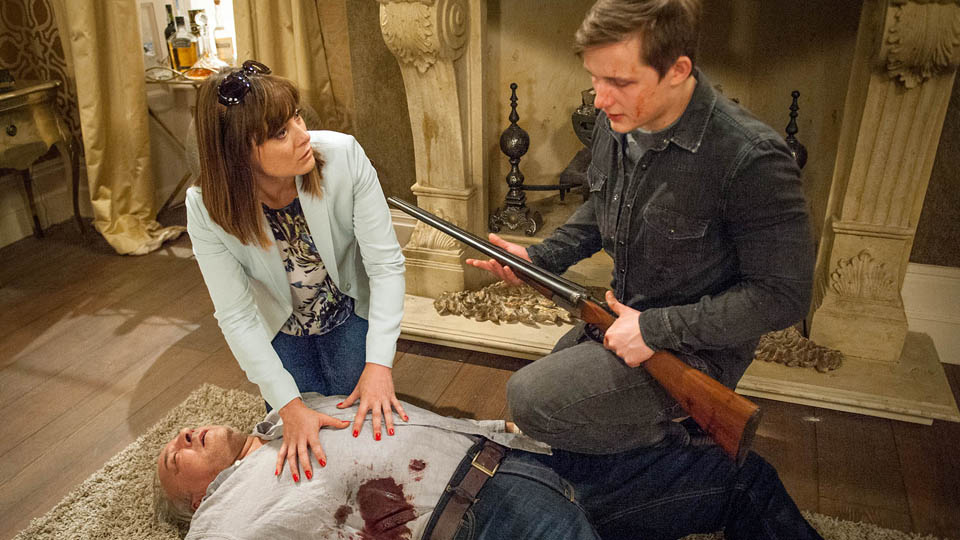 Chrissie is enraged that Andy let Lawrence spend time in prison for shooting Robert, knowing full well that he had nothing to do with it.  Andy drowns his sorrows with Bernice and when he tells her that he and Chrissie are no more, it’s only a matter of time before one thing leads to another.  Will they be seen by Chrissie?

Lachlan makes an ill-advised pass at Gabby only to be left embarrassed, matters are made worse by Lawrence who humiliates him in front of her.  Next day it’s his birthday and he’s still smarting and Lawrence is nasty to him yet again.  Later, he appears at Home Farm complete with a loaded shotgun; much to Lawrence’s surprise.  He orders Lawrence to text Chrissie and apologise.  Lawrence agrees but then makes a grab for the gun with disastrous consequences.  Chrissie hears the shot and comes running only to find Lawrence collapsed on the floor.

Andy attempts a reconciliation with Chrissie but realises something is wrong when he hears the sirens heading for Home Farm.  When he arrives Chrissie shuns him and is left out in the cold at the hospital too.

Lachlan and Chrissie are alarmed to hear that the police are searching the grounds at Home Farm.  Chrissie heads to the place where they hid the gun but sees the police coming and makes her escape.  Later at the B&B, Chrissie’s thoughts change from protecting Lachlan to revenge on Andy after she overhears him on the phone to Bernice.

Andy is at the police station, frustrated that the police aren’t listening to him and things aren’t looking good;  what has Chrissie done?

In the hospital, Ronnie sits at Lawrence’s bedside pleading for him to wake up.  It looks like his pleas have been heard when Lawrence later comes to.  Chrissie begs him not to say anything to the police about what Lachlan did.  Andy is relieved to hear that Lawrence is awake, thinking his name will be cleared.  Chrissie plays the perfect worried girlfriend role and hires Rakesh to help Andy and soon she visits him in prison and tells him she believes he didn’t do it.

Meanwhile, Lisa urges Ronnie to tell Lawrence how he feels and he visits the hospital again and asks Lawrence to give them another go.  What will his reaction be?

Will Rakesh come clean to Priya?

Rakesh is still trying to hide his financial woes from Priya, asking Rishi not to mention him losing at cards.  When Pierce comes demanding his winnings, Rakesh is overwhelmed.  Rishi steps in and pays off Pierce much to Rakesh’s relief, although he pretends to be angry with Rishi.

It seems he has a new plan as he makes a call; he’s decided to sell Mill Cottage and pretends to Priya it’s so they can move on.  For a moment he’s tempted to tell Priya everything, but will he?

Marlon and Carly spend the night together

Rhona sees a spark between Marlon and Carly and asks him if something is going on.  She offers to have April so Marlon can spend time with Carly even though he insists he doesn’t fancy her.

Carly and Harriet bully Marlon into attending Harriet’s self-defence class and the tension between him and Carly when they are up close and personal is palpable.

Marlon asks Harriet for a date as if to prove he’s not in to Carly only to learn afterwards that it’s the day of Carly’s dead son’s birthday.  He comforts Carly and inevitably a kiss follows.

The morning after and both Carly and Marlon are awkward and they confess their sin to Vanessa and Rhona respectively; both admit they are worried about spoiling their friendship.  Later, when April invites Carly round, Marlon is disappointed to hear her decline.  Can April bring the pair back together?

Gabby is disturbed to learn burglars might have been watching Home Farm and masks her family turmoil with stealing and lies, swiping Pearl’s brooch.  She then breaks into Victoria’s to steal a dress only for Ashley and Laurel to later realise what she’s done.  Soon things take a turn for the worse at the Thomas house.

Chas shows Charity a competition for best Publican and Charity enters it immediately.

Robert urges Aaron not to tell Chas about Andy having him shot. But Chas senses something’s wrong and demands the truth from Robert.

Moira is shocked to hear Adam and Victoria were burgled and instantly thinks it’s Holly’s drug dealer Simon who’s behind it.  She uses Holly’s phone to call him and warn him off.  Has she started something?