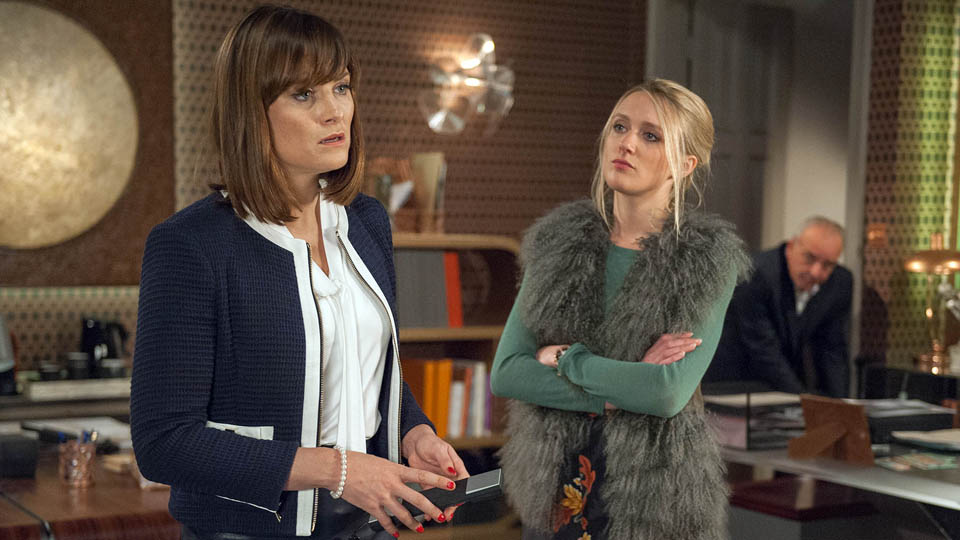 Welcome to our look ahead to what’s going to happen in Emmerdale this week and Kerry is on the make, Lachy is considering confessing all and Frank’s past comes back to haunt him.

Aaron is struggling to mask his jealousy over Robert and Rebecca but Robert reassures him that nothing is going on.  Meanwhile, Lawrence pacifies Diane and tells her that they won’t be evicted.  Later, Rebecca and Robert chat in the backroom at the Woolpack and she kisses him, but he pulls away explaining it’s all about keeping to the plan.  Little does he know Diane has overheard part of the conversation and is disgusted with him.

Diane tries to reason with Chrissie at Home Farm and ends up with the shotgun in her hand and Chrissie begging her not to use it.  Chrissie breaks down and admits that even she is scared of Lachlan and what he’s capable of.  She is totally unaware that he’s secretly filming the conversation and he’s not happy with his mother’s betrayal.

Rebecca urges Lachlan to go to the police and then pretends to Chrissie she’s not seen him.  Chrissie and Lawrence are shocked when the police arrive at Home Farm.  As Lachlan’s interview starts at the police station, he hopes to make the police see it was an accident, but will they?  Chrissie considers confessing to save her son and Rebecca encourages the idea.  Can she go through with it?

Bernice finds Jai’s client George at the salon with Kerry and is in no doubt how Kerry sealed the deal.  As Jai prepares the contract at the factory, Kerry interferes and attacks George for ignoring her and is fired on the spot.

Later, a drunken Kerry is out for revenge as she breaks into the factory but instead of cash finds a bottle of whiskey and helps herself.  She wakes up covered in chocolate and booze and panics as she hears Jai and Rishi approaching.

Next day, Kerry threatens the Sharmas with legal action and Rakesh suggests Jai should settle because it could be a gamble in court.  Jai is furious and when he sees Kerry in a wheelchair he tries to tip her out.  It seems that Jai’s not the only one that’s had enough of her as Bernice fires her from the salon too.

Has Bernice got a crush?

Nicola grows suspicious when Jimmy and Bernice keep telling her to go off for her spa weekend.  Things aren’t helped when she finds both of them in a state of undress after Bernice tries to help Jimmy fix a tap.  Jimmy has to come clean about her snoring and Nicola stomps off to the spa not having any of it.

Bernice uses Jimmy as a shoulder to cry on about her motherhood skills and Rodney soon starts to suspect Bernice is developing feelings for Jimmy.

Megan asks Frank what crime he committed to end up in prison but will he tell her the truth?  Whilst on a date Frank is cornered by an old acquaintance who blames Frank for ruining his life.  What did Frank do?

Pierce is getting more and more wound up with Paddy as he overhears that he might still be in love with Rhona and the mystery flower sender.

Carly helps Brenda flog some cream but warns her it’s knock off junk.