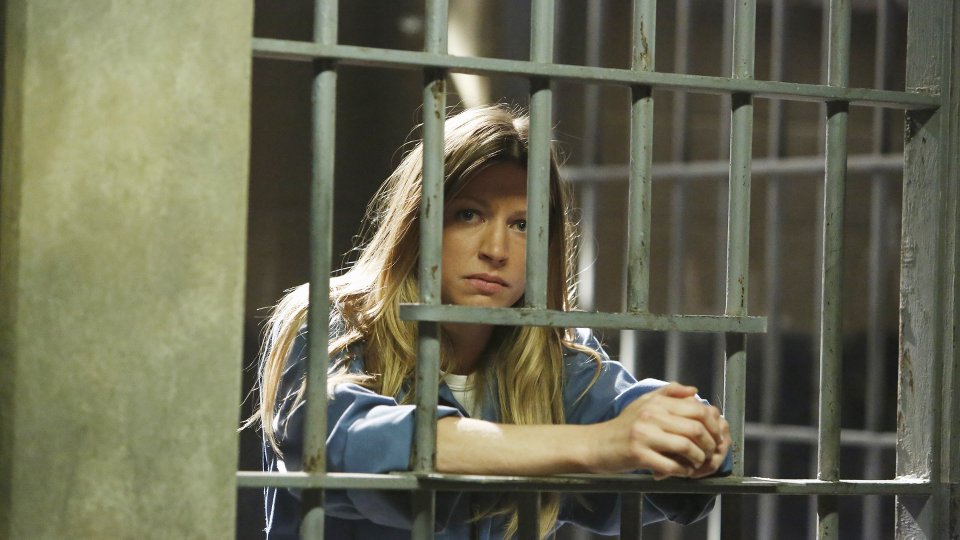 Tonight’s episode of Mistresses ended on not one but TWO cliffhangers ahead of next week’s season finale.

We’re all in this together

Harry (Brett Tucker) saw the news on TV that Calista had been arrested and called April (Rochelle Aytes) to find out if she knew why Joss hadn’t been released from prison. The police released the information that they believed Joss and Calista had been working together to murder Lucas (Noam Jenkins). Calista took out her anger on her lawyer during a visit where she was told that the prosecution thought that she had manipulated Joss to make her kill Luca. Desperate Calista wanted to back-up Joss’ original statement but she was told that she has lost all credibility. It soon became clear that Calista’s lawyer thought she was involved in the murder too.

Joss was told by her lawyer that she was being offered a plea deal. If she admitted that she shot Luca she would get a reduced sentence but the lawyer advised her not to take it. He explained that if she can’t prove her innocence she could be facing life in prison.

Calista bribed Joss’ prison friends so that she could get closer to her. Once they were about to talk, Calista started a fight to ensure that she and Joss were put in solitary together so she could talk to her. Calista suggested that she and Joss put their heads together so they could figure out who killed Luca. She tried to defend her actions by saying she was just trying to protect herself after Joss came after her. Calista broke down and told Joss that she considered her a close friend and loved her.

Harry arrived at the prison to see Joss and grew concerned when she didn’t show, and no one told him where she was. Joss was eventually brought out to the outside visitor’s area to see Harry where he told her that he had complete faith in her lawyer. They said I love you to each other and Harry surprised Joss by telling her that he’d bought the house of her dreams for them to live in.

Calista met with her lawyer again who had no luck turning up any evidence to prove her innocence. The lawyer told her that Joss’ lawyer had found emails from Calista to Luca where she threatened to kill him. She then advised Calista to say that she did plot with Joss to catch Luca in the act but Joss went rogue and killed him. Calista refused to do it and asked for her day in court instead.

Joss chatted to her cell-mate who advised her to consider the plea deal that she’d been offered. She discussed it with her lawyer who admitted that the case against her was strong. He told her that he thought she would be good on the stand and able to sway the jury. Joss told him to accept the deal for her. After the meeting she spoke with her mother on the phone and broke down when telling her that she was accepting the plea deal.

After overhearing Joss on the phone to her mother, Calista asked to revise her statement and confessed to the murder of Luca. She told the police that Joss had nothing to do with his death.

Following the bombshell that Vivian (Sonja Bennett) was sick again, Karen (Yunjin Kim) went to the hospital with her for her appointment. Whilst there they found out that Vivian’s body was rejecting Karen’s cells and that her liver was beginning to fail. Vivian pushed the doctor to tell her how long she had left to live and she couldn’t tell her. Karen tried to keep Vivian’s spirits high promising her that she could help her find a solution to her health issues.

Vivian revealed to Karen that Alec (Ed Quinn) didn’t know that she was sick again. She didn’t want to tell him as he was being honoured for his work that evening and she didn’t want to distract from that. Vivian pleaded with Karen not to tell Alec that she was sick again. Karen bumped into Alec at the hospital and the good doctor told her he hadn’t reacted well to her baby news. He explained that his father set a poor example and tried to persuade Karen to reconsider their offer about the bringing the baby up together. He also invited her to see him getting his award the following night.

Karen had an awkward encounter with Alec and Vivian who were lunching with Alec’s parents. They thanked her for everything she’d done for Vivian and Karen made her excuses to leave as she barely held herself together. Later that day she arrived ready for Alec’s award ceremony and found Vivian worried that Alec would realise that she wasn’t well. Just as they were leaving the house, Vivian collapsed and Karen called for an ambulance.

April and Lucy (Corinne Massiah) went to therapy to try and work on the issues they have with each other. After the session the therapist wanted to speak to April on her own and April broke down fearing that she was a bad mother. The therapist told her that she had done good things for Lucy especially letting Mark (Rob Mayes) and Scotty live with them.

Harry advised Mark to tell April how he feels and Mark went to see April at the store to ask her out on a date. April didn’t understand what Mark was asking her and they were interrupted by a phone call from a neighbour saying that there was a strange man in the garden. They rushed home to find that Miranda (Kate Beahan) had arrived back early to pick Scotty up and let herself into April’s house. Miranda surprised everyone by introducing her new boyfriend that she’d met a week earlier.

The arrival of Miranda and her boyfriend didn’t go down well with Mark. He was furious when Miranda arrived home with Scotty way after his bed time. Her new boyfriend dropped a clanger when he let slip that they were going to take Scotty and Miranda announced that they were getting married. Mark tried to convince her to let Scotty finish out the school year but Miranda was having none of it.

Mark did some Internet research on Miranda’s boyfriend and found out that he really was rich. April tried to stick up for Miranda but Mark remained sceptical. They invited Miranda over to have a conversation about keeping Scotty in school for the year rather than disrupt him for a marriage that may not work. Miranda tried to tell Mark he knew nothing about being a parent but April jumped in and argued his case. With nothing left to lose Miranda told April that Mark had fallen off the wagon two weeks ago causing April to leave the room for a breather.

Harry struggled to control his anger following the news that Joss wasn’t going to get out of prison any time soon. After trying endlessly to reach Joss’ lawyer, Harry had to be calmed down by Mark. He also advised Mark to tell April how he feels about her. Ari (Carmel Amit) stopped by to tell him about a meeting she’d set up for him and things got awkward when she thought Harry was bothered by her attempt to kiss him. After seeing Joss in prison, Harry went to see the house he was buying for them and started to talk about their future.