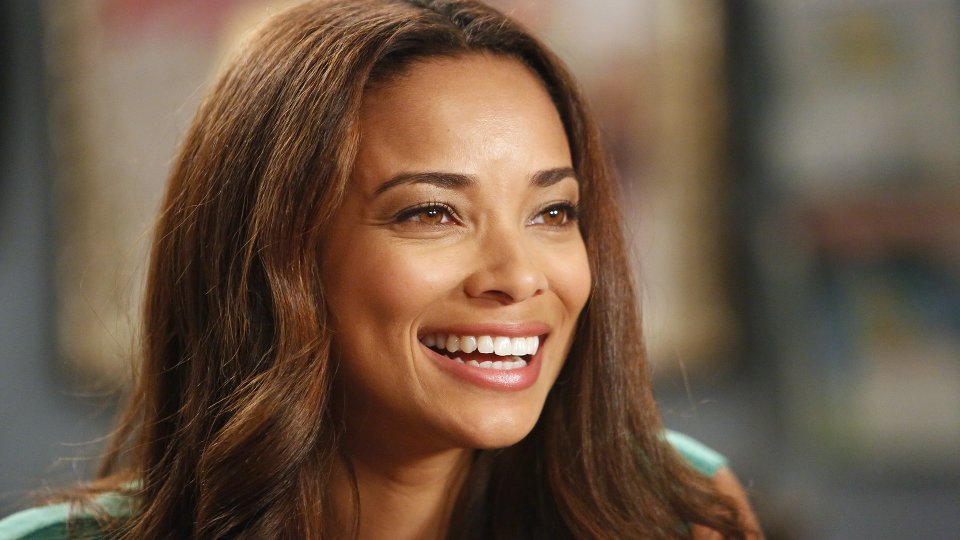 Calista (Jennifer Esposito) and Joss (Jes Macallan) tried to shift the blame back and forth in the latest episode of Mistresses.

We’re having a baby!

Karen (Yunjin Kim) sat down with Alec (Ed Quinn) and Vivian (Sonja Bennett) and told them that she was pregnant with Alec’s baby. They were shocked by the news and Karen told them that if they wanted to be involved with the baby’s life she was happy for them to be. When Alec and Vivian started to argue with each other, Karen decided to leave the house.

As she driving through town, Karen spotted Vivian getting cosy with a man that wasn’t Alec. Unsure what she’d seen, Karen went over to Alec and Vivian’s and told them that moving in with them to raise the baby wasn’t going to work. They pressed her for an explanation and she left abruptly.

Vivian arrived on Karen’s doorstep demanding an explanation and Karen told her that she’d seen her with another man. A tearful Vivian told Karen that the man she was speaking to was an old friend and that she’d found out that she was sick again but Alec didn’t know.

Calista spent her time drinking martinis and reading the supportive messages she’d been getting from her fans. Her lawyer called her to inform her that she was on her way to see the police after new evidence had come to light. Joss’ lawyer had got his hands on video footage showing Calista at her house the night of the murder. He also told her that she was allowed visitors and that Harry (Brett Tucker) had requested to see her.

Harry arrived at the prison to see Joss and she was excited to see him. They got told off by a prison guard for touching before talking about how much they had missed each other. Harry asked Joss what had been going on and wanted to know how she got into the mess she’s in. Joss didn’t want to go into all of the details and Harry used the opportunity to ask if she should get a better lawyer than the one she has. Joss was then taken back to her cell by a prison guard.

Calista received a call from a journalist asking her for a comment on the leaked video tape. She had no idea what had happened but her lawyer told her to go on the Internet and she saw Luca’s (Noam Jenkins) lover sounding off about her on the news. Calista swore to her lawyer that the woman in the video wasn’t her and insisted someone had dressed up like her in her car to frame her. She admitted that everything Joss had said was true and claimed that someone was making it look like she’d committed the murder.

Joss’ lawyer visited her to go through the facts once again. She asked him how he got the tape and he admitted that it had come from Daniel. That made Joss angry and she mentioned that Harry had shared concerns with her about the work he was doing. That offended him and he left the prison, and went straight to Harry to find out what his problem with him was.

Calista started her PR campaign to rehabilitate her image and prepared for a TV interview with Diane Sawyer. When a knock came on the door, it was the police waiting for her, not Diane. Calista was arrested and taken to the police station. Calista was taken for interrogation where she was told that she would be charged with obstructing the course of justice. She was then booked and taken to prison.

Harry went to see Joss again and suggested that she meet with a new lawyer that was recommended by his agent. She told him that she didn’t think it was a good idea and he told her he felt helpless. When she was back in her cell, Joss saw Calista being brought into prison and was told her lawyer was waiting for her. Expecting to be released, Joss was shocked when she was told that the police thought they she had conspired with Calista to kill Luca.

April tried to carry on as normal when Blair (Brian White) returned. She felt guilty after sleeping with Daniel and didn’t come clean to Blair about her indiscretion. He suggested they go away as a family and assured her he would convince Lucy (Corinne Massiah) of the idea. In a bid to feel better about her actions, April started to prepare a fancy dinner whilst chatting to Karen on the phone. She managed to drop the duck she was preparing on the floor.

Marc (Rob Mayes) offered to help April prepare her dinner after she managed to ruin another two ducks after the first disaster. Lucy arrived home and served up a whole load of sass causing April to lose her temper with her. April arrived home after visiting Joss and found Marc hard at work in the kitchen. He told her that she needed to lighten up on Lucy and asked if she knew that Lucy didn’t like Blair. April reacted angrily and shut Marc down.

During dinner Blair enthused about their impending trip and Lucy started being rude to April. After saying that her mother was acting fake, Lucy then told them that she had other plans and tried to leave the table. Things got heated and April slapped Lucy as a shocked Blair looked on. April wanted to apologise to Lucy but Blair told her that slapping Lucy was OK. That caused an argument between them and April asked Blair to leave.

The next morning a sheepish Lucy apologised to April for her behaviour and April apologised for slapping her. Lucy admitted that she felt a mixture of anger and sadness, which is why she was behaving the way she was. Blair swung by April’s store to see her and the two had a talk. April apologised for the way she acted the previous night and told Blair that she didn’t think there was a future for them. She told him that she’d slept with Daniel while he was away and he left the shop angry and upset.

April returned home and told Marc what had happened. She told him she was a terrible person but Marc told her it wasn’t true. Marc asked if April was going to get back together with Daniel and she said that wasn’t her plan. April also admitted that she didn’t think Blair was the right fit for her. Was it just us or was there a moment there with April and Marc?

Going above and beyond

Ari (Carmel Amit) acted nervously around Harry after giving him a thank you gift for helping with the fundraiser. After he’d been to visit Joss in prison, Harry was enjoying a workout when Ari arrived at his house unexpectedly. She told him that she had ‘Harry on the brain’ and kissed him. When he didn’t reciprocate she quickly left leaving Harry confused.