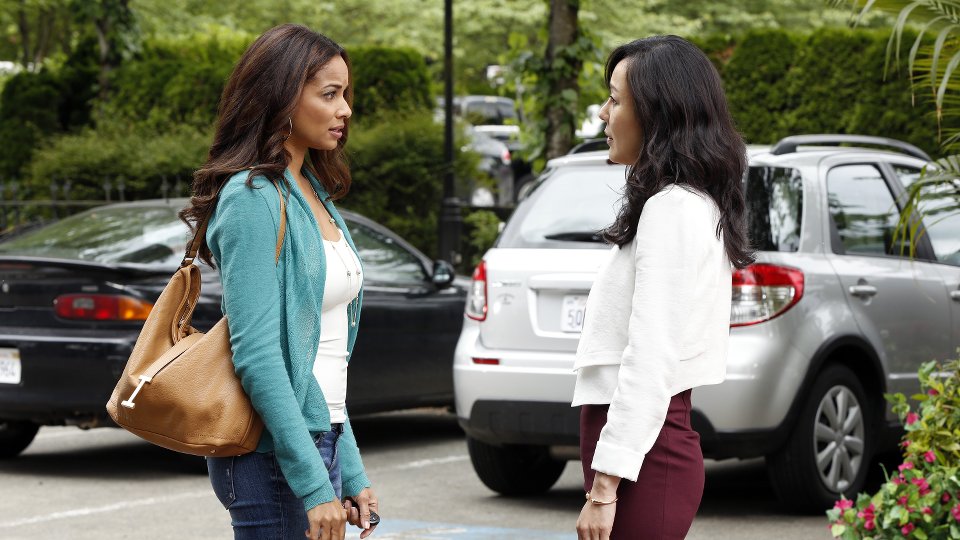 Everyone was distracted as they tried to find a way to get Joss (Jes Macallan) out of prison on the latest episode of Mistresses.

Joss was taken to the police station and processed after being charged with Lucas’ (Noam Jenkins) murder. She was shown to her cell and struggled to hold it together. Karen (Yunjin Kim), April (Rochelle Aytes) and Harry (Brett Tucker) were told the news about Joss’ arrest by her lawyer. They were angry to find out that Joss had limited visitation rights and her bail had been refused.

During a visit, Joss’ lawyer told her that Calista (Jennifer Esposito) had told the police that she was obsessed with her. Joss told him that wasn’t true and he assured her that he was going to get her out of prison. When she went back to her cell, Joss bonded with her cellmate and protested her innocence. She also came to the conclusion that it was her indiscretion with Harry that landed her in the situation she’s in now. Joss imagined what life would have been like had she married Scott (Justin Hartley).

In her fantasy life Joss moved in to Calista’s house with Scott after they outbid her for it. She soon realised that her life would always cross paths with Harry meaning things may not have turned out any differently if she had married Scott.

A bun in the oven

Following their meeting with Joss’ lawyer, Karen told April that she was pregnant. She confirmed that the child was Alec’s (Ed Quinn) and asked April if she should speak to Alec and Vivian (Sonja Bennett). Karen suggested that she may be able to carry the baby then hand it over to Alec and Vivian. April tried to get her not to rush into making any decisions but Karen was adamant she would tell them the truth.

Karen went to see Vivian and found out that Alec had stormed out after a big row. Vivian told her that since Karen left their relationship had taken a turn for the worse and that she missed having Karen as part of the equation. She also revealed that she was thinking of leaving Alec. Karen told April that she didn’t tell Vivian about the baby but admitted that she was considering keeping the baby.

As she decided what to do, Karen went to see the priest again who told her that she should give the child up for adoption. She was angry when the priest judged her behaviour and told her that the relationship was sinful. He tried to make her see his point of view but she was stormed out of the church. Karen picked up some books on pregnancy and stocked up on her vitamins in preparation for the baby. She then went back to Vivian and Alec’s to tell them about the baby.

Mark (Rob Mayes) tried to reassure April that Joss would be OK in prison. He admitted that he once spent time in prison after accidentally soliciting a prostitute. He then went to work and April made a mystery phone call. Blair (Brian White) called April and she had to hang up when there was a knock at the door. It turns out that it was Daniel (Ricky Whittle) she’d called to see if he could help prove Joss’ innocence. He admitted that the case around her was tight and helping wasn’t going to be easy. April then had a heart-to-heart with Daniel and when it started to get a little too cosy, April made an excuse to leave but not before agreeing to lunch with Daniel.

April and Daniel’s lunch date brought some honest conversation and a bit of flirting. Daniel told April that he missed her and just as it seemed they were having a moment, his phone rang. April asked what the call was about and Daniel asked if she wanted to go for a ride. Daniel took her to Calista’s house to take photos that can be used to help Joss’ case. He also told April that she was the love of his life.

Daniel took April home and it didn’t take long for the two of them to rip each other’s clothes off. After their passionate love making, April found Daniel’s phone between the sofa cushions and started to look through his messages. Daniel visited April’s store to pick his phone up and she told him they couldn’t be together again because she couldn’t trust him. Before he left, Daniel gave April something that he thought might help Joss’ lawyer.

Harry had to turn down a charity event that his publicist had got him into because he couldn’t close the bar down to attend. She wasn’t impressed but Harry’s mind was on getting Joss out of prison rather than raising his own profile. Ari (Carmel Amit) convinced Ellis (Kavan Smith) to let her move the fundraiser to the bar so Harry could be there. Harry tried again to get out of it but he was told that Ari would drop him if he wasn’t there.

Harry went to see Joss’ lawyer and blew off some steam blaming him for not getting Joss out of prison. The lawyer told Harry some home truths and listed some of the evidence against Joss. Harry asked if he would be classed as family as he was once Joss’ brother-in-law and the lawyer said he would see what he could do.

As he was so busy trying to help Joss, Harry encountered the wrath of Ari who told him that he needed to concentrate on the opportunities in front of him ant put his personal issues aside if he wants to be successful. During the fundraiser Ari told a moving story about her sister who died from cancer. Harry was moved by the speech and took over when Ari broke down. After the event Harry spoke with Ari and thanked her for her support before giving her a hug. It seems Ari might be catching feelings…