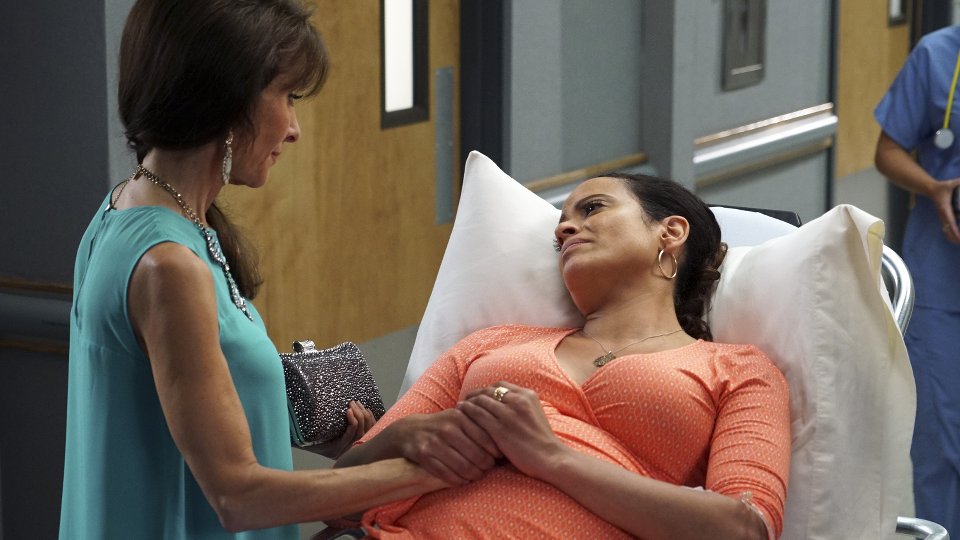 Carmen (Roselyn Sanchez) dropped the bombshell that she was back together with Sebastien (Gilles Marini). The maids weren’t thrilled by the news and they worried for their friend when Carmen announced that they weren’t just back together, they were also engaged. Carmen promptly quit her job and butted heads with Marisol (Ana Ortiz) who tried to warn her that she wasn’t thinking things through properly.

Adrian (Tom Irwin) continued to misunderstand what Evelyn (Rebecca Wisocky) wanted in life by trying to offer her a replacement for the child they just lost. Evelyn responded by serving Adrian divorce papers in a restaurant before storming out. She did it in the classiest way possible of course! Adrian got his revenge soon enough though when he refused to sign the papers to sell the house cheating Sebastien out of a sale and denying Evelyn her wishes.

Rosie (Dania Ramirez) went to see Spence (Grant Show) and was worried when he wasn’t in his apartment. Thanks to an overly opinionated neighbour, Rosie discovered that he was in hospital and rushed to see him. Relieved that he was OK, Rosie was thrown a curveball when Spence didn’t recognise her. She tried to job his memory by telling him their history but it didn’t help Spence remember anything about their relationship. Rosie was told by a nurse at the hospital that Spence had been beaten and that he may not regain his memory.

Rosie put the dots together and realised that Ernesto (Cristian de la Fuente) was involved. She went to confront him and was surprised when Ernesto admitted his part in what had happened before telling her that he was leaving town for good. Rosie begged him to say goodbye to their son before he left. Ernesto did the right thing but left his son begging for him to come back as he walked away.

Just when we thought things couldn’t get any worse for Rosie, she got the biggest shock of the episode when she went back to visit Spence and found his ex-wife Peri (Mariana Klaveno) at his bed side and back to her old tricks. Peri had managed to convince Spence that she was his wife and she kissed him in front of Rosie.

Genevieve (Susan Lucci) and Zoila (Judy Reyes) attended their first session of couples’ therapy and it didn’t go very well. Zoila kept talking over Genevieve and then got angry when the therapist started to side with Genevieve. Following their session Zoila refused to go to therapy again and things got heated with Genevieve. During their exchange Genevieve revealed that she had seen Javi (Ivan Hernandez), which was enough to get Zoila wanting to go back to therapy to thrash things out.

At the hospital Zoila and Genevieve started bickering again but their row was cut short when the lift they were in stopped working. To make matters worse Zoila’s waters broke and she went into labour. Proving what a quick thinker she was, Genevieve used her high heels to pry open the lift doors and climb out so she could get help for Zoila. Thanks to Genevieve’s efforts Zoila was put on a stretcher in preparation for the arrival of her baby. The moment also proved to be a bonding one as the two women put aside their differences.

Zoila’s labour progressed and as she was trying to deal with the contractions, she passed out due to complications. The decision was then given to Genevieve over who they should prioritise in surgery – Zoila or the baby…

And the murderer is…

Detective Marisol (as we’ll call her from now on) went to see Taylor and discovered that Michael thought his wife was involved in Blanca’s disappearance and the murder of Louie Becker (Eddie Mills). Taylor reacted angrily to Marisol’s questions and threw her out of the house. Marisol’s next stop was to go and see Michael who shared his suspicion about Taylor’s involvement in Louie’s death. Before he could tell Marisol everything he knew (he only got to telling her that he asked Louie to find out who Taylor was having an affair with and confirmed that Katy had seen the man) they were interrupted by the police who arrested Michael for Louie and Blanca’s deaths.

Marisol went back to Taylor’s house and aggressively pushed her for answers. She told Taylor that she knew she’d been having an affair and Taylor admitted that the man she was seeing killed Blanca. Taylor began to tell Marisol the truth and revealed that the man she had an affair with was…SEBASTIEN! Marisol immediately thought about Carmen who was busy rifling through Sebastien’s things after a beautiful woman came looking for him. As she was rooting she found the dress she loaned Blanca and was caught by Sebastien.

Carmen quizzed Sebastien and he admitted that he had killed Blanca. When she tried to get to her phone, Sebastien knocked her to the floor and read a message from Marisol before vowing to take care of her too. As she arrived at the Powell house Marisol called Rosie and told her that Sebastien was the killer. When Rosie put the phone down she discovered that Taylor and Katy were gone from the Stappord house and found a card from Katy.

Marisol arrived at the Powell house just as Adrian and Evelyn were in mid row. Trying to find out where Carmen was, Marisol soon had her question answered when Sebastien brought her into the room at gun point. Sebastien tied everyone up and told Adrian that he owed him the commission he cheated him out of. Adrian refused to budge so Sebastien threatened to torture Evelyn instead.

Michael got out of the police station and received a call from Adrian asking him to go to the house. What he didn’t know is that Sebastien had a gun to his head forcing him to make the call. Michael arrived at the Powell house and started to ask Evelyn questions as to why he was instructed to bring money. Sebastien took over and brought Michael into the house with his other hostages.

Crafty Marisol asked Carmen for a bobby pin so she could pick the lock on her handcuffs. Once Michael joined them Marisol did her best Miss Marple and told everyone what had happened to Louie and Blanca. We finally learned the events of THAT night when Sebastien accidentally killed then purposely dismembered Louie in Taylor’s living room. Michael reacted angrily and Sebastien shot and killed him as the others looked on in horror.

Sebastien then turned the gas on with the intention of blowing up the house. Carmen tried to appeal to him and make him think there was still a chance for them. Her efforts failed when he realised she was trying to play him. As Carmen distracted him, Marisol hit him over the head and set the Powells free. Meanwhile we saw Taylor in a disguise leaving Marisol a voicemail explaining that she had taken Katy to start a new life.

Safely outside the house, the police met Evelyn but she realised Adrian wasn’t with them. It was revealed that he was inside the house, which exploded when Sebastien accidentally ignited the gas. Did either of them make it out alive? Judging from the reaction Evelyn had we’re not very confident. Surely this isn’t the end of the Powell marriage?

Devious Maids returns in 2016 for a fourth season.