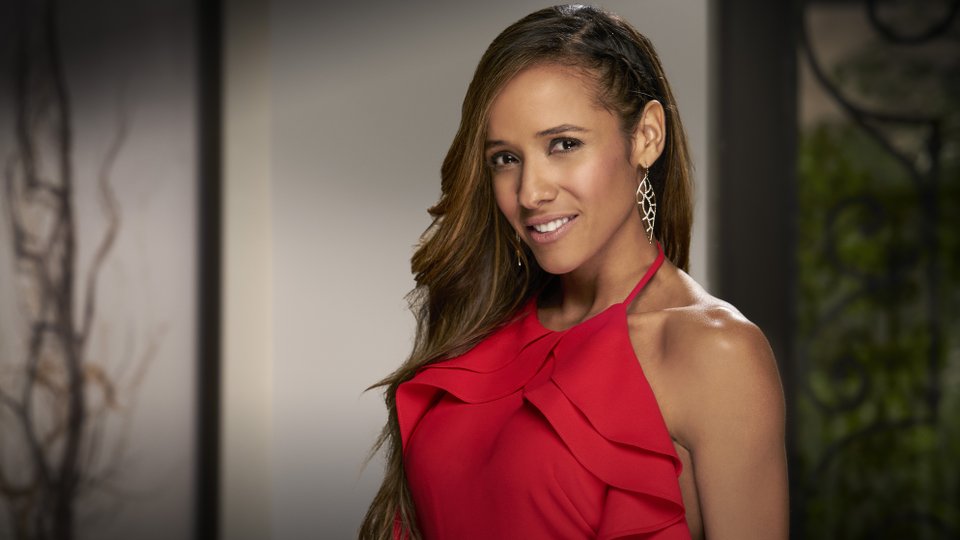 Devious Maids returns to TLC in the UK this week for its fourth season and there’s another murder for the maids to solve.

Last season Carmen (Roselyn Sanchez) got caught up in Sebastien’s (Gilles Marini) murderous ways and the season finale left the fate of Adrian Powell (Tom Irwin) in the air after Sebastien accidentally blew up the Powell mansion. Rosie (Dania Ramirez) meanwhile was dealing with Spence’s (Grant Show) brutal attack, which threw up plenty of surprises too.

Ahead of the show returning on Thursday, I caught up with Dania Ramirez to find out what’s in store for Rosie and Spence, talk about some of the cliffhangers from season 3 and to get the lowdown on this season’s shocking murder.

Season 3 of Devious Maids left Rosie with quite the predicament…

Every season we end with a big cliffhanger and for Rosie she went to see Spence who had been beaten up and was at the hospital. He is now suffering from amnesia and can’t remember anything so he sees Rosie as his maid and remembers being with Perri, who is his ex-wife. She was in season 1 and as we all know she’s the biggest villain and bitch (laughs).

At the end of season 3 there was also a big house explosion so you’ll find out what the outcome of that is and Adrian’s fate. We’ve kept it very secretive.

Where does Perri’s return leave Rosie and Spence as we head into season 4?

For season 4 she’s going to come in, try to keep him away from Rosie and remembering anything about her. My journey is to try and get him back.

What else can you tease about what’s coming up for the show this season?

Season 4 I believe is the best season so far. It’s just so juicy and deviously delicious. We have our executive producer Eva Longoria coming to appear in the first episode playing herself. Something we’re going to do this season is dabble in the entertainment side of the world in Beverly Hills. It’s going to be really interesting to see the dynamics and the affect that’s going to have in everybody’s lives.

There’s going to be another murder and you’ll find out who that is right away in episode one. The victim or the victims of the murder, and the people that are going to be in jeopardy will directly impact Rosie’s life. I have to play a maid detective and that’s going to be really interesting because Rosie’s very gullible and a lot of people maybe think of her as dumb. She’s going to have to be very savvy and although you might think she wouldn’t be the best detective, she’s really surprised me this season and she’s going to surprise everyone.

I really get to give her a backbone. She’s funnier than she’s ever been because she’s in all these different situations trying to figure out what happened. Her life and her love is at stake, and she’s going to work really hard to try and figure out who the murderer is.

The relationship between all the girls is going to be really present this season.

Rosie is working for Genevieve this season and it’s a very different relationship to the one Zoila had with her. Genevieve isn’t Rosie’s biggest fan is she?

At the end of last season the relationship between Zoila and Genevieve was on the rocks. Genevieve had to make a big decision as to whether to save Zoila or Zoila’s baby because Zoila had complications at the hospital. The decision that Genevieve, played by the amazing Susan Lucci, made is going to have a big impact on their friendship and relationship as boss and employee. Rosie comes in and tries to work it out and she gets to work for Genevieve this season. There’s a lot going on for Rosie this season. She’s everywhere!

I get to work with Susan Lucci a lot and that’s a lot of fun. Both those characters are very childlike. The real fun part of playing with Susan’s character is because both characters are childlike and have sweet dispositions and you’re going to see both of them get tested by each other and other people. She doesn’t like (Rosie) very much which is a lot of fun to watch because she brings out a lot of Rosie’s negative qualities like her voice is super annoying and she’s maybe too sweet for Genevieve who has been used to working with Zoila.

We do have a long journey in our relationship and we do end up helping each other a lot. I think we end up growing a lot.

Is there any chance we’ll see Ernesto again in season 4? Might he come back?

Well Ernesto was dead in the first season then he came back so you just never know on Devious Maids what’s going to happen. He left for Mexico (last season) and this season we have a shorter season with 10 episodes. It’s very much a whodunit type of situation and journey for Rosie. We’re dabbling more into that than we are into the past love of her life. We’ll see what happens in season 5 though.

Rosie always seems to find herself in the middle of the juiciest mysteries. What’s that like for you as an actress and what are the challenges?

I love playing her. There’s something about her and what makes her really special is how heightened a character she is but at the same time how grounded she has to keep herself. That’s what I find so fun about playing her. She is this really unique, specific character and I get to give her all these layers because she does have to dabble into trying to figure out who the murderer is this season.

She has this love relationship (with Spence) and she’s the only character that has had a relationship that’s gone from season 1 to season 4. There’s always this fight for love and family that she’s had to go through. She’s such a unique person and to have her be a part of every storyline and have a lot of the comedy play out has been really fun for me.

For me as an actress I’ve always loved to play different characters and I think the reason I was attracted to Rosie was because after being on X-Men and The Sopranos I’ve been really engaged in drama. It wasn’t until I started working on Entourage that I got to dabble in some of the comedy. When I read the script for Devious Maids I had the character in mind and she was over the top but really caring and really loving. To be able to play all of these different things, I really have to thank the writers for allowing me and for writing such a vehicle for me so I can showcase that part of my talent. She’s very different from who I am so I get to tap into sometimes my mother, who I pull a lot from. I take bits from all these comedies I really love and try to create character that fits everything. Rosie has her little walks and she talks a lot with her hands in a very conservative way.

The challenge is always to make her relatable and maker her struggle really heartfelt.

I was surprised to learn that Jesse (Nathan Owens) would be around this season. How does he fit into things?

Last season you saw that Jesse and Marisol (Ana Ortiz) had a relationship but then they went their separate ways. What’s really great about this season is we have a male maid still and I love that. The beautiful thing about the show is that we do tackle stereotypes in a different way. I thought it was very interesting to have an American guy who was a maid. He’s in a very important household, where all the drama happens in episode one, and he’ll still be around to help Rosie figure out the murders this season so I call him my little detective partner (laughs).

Was it interesting to do more scenes with Nathan because your characters didn’t really interact last season?

It’s a lot of fun to work with a lot of different people and that’s what I love about Rosie this season. She’s not only dabbling into the mystery but she’s really trying to figure out who killed the main character that dies in episode 1. At one point or another everyone becomes a suspect so I do end up working with everyone this season. The way the show is structured, I’d never even worked with Susan Lucci’s character and I think I’d said about 2 lines to her the past three seasons.

This season they’ve been able to make it a real melting pot and I really do get to work with everyone in one way or another. Working with Nathan was a lot of fun. It’s not a loving relationship; it’s more of a friend relationship. Everyone judges Rosie and he will judge her too but he’ll change his mind. I get to dabble into this idea of being a maid detective which is bizarre and really funny, and he gets to be a part of that.

We also have a new character that comes in as Perri’s sister. She’s played by Katherine LaNasa who happens to be Grant Show’s real wife. That was really fun for us because he played my love interest for three seasons. If you thought Perri was evil just wait until you meet her sister (laughs).

Devious Maids kicks off season 4 at 10pm Thursday on TLC.