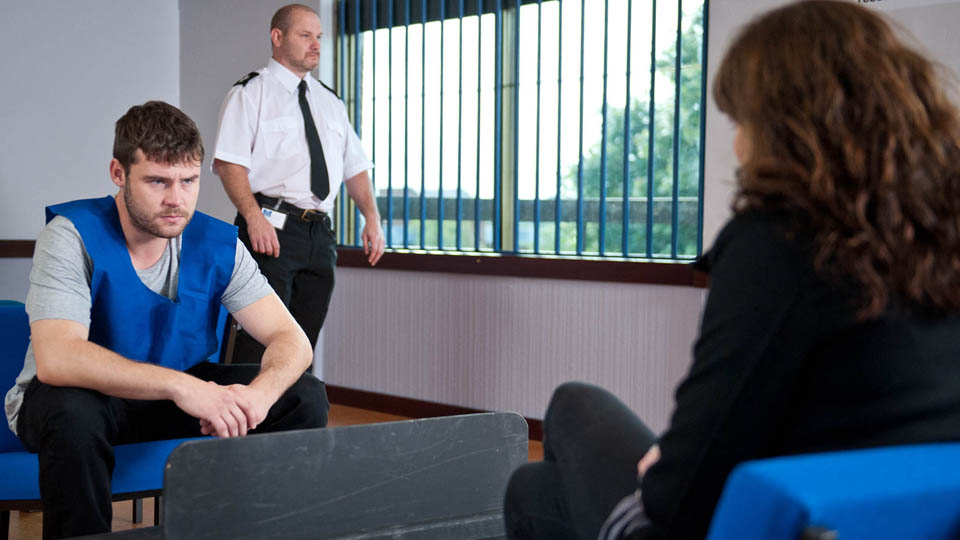 Welcome to our weekly look ahead at what’s going on in Emmerdale and Aaron’s secret comes out.  Read on…

The police have decided to arrange a reconstruction of Robert’s shooting with Lawrence talking them through how he did it.  Rakesh reassures Chrissie that if Lawrence had nothing to do with it, then he won’t be able to give precise details and they’ll realise he’s not the shooter.  Chrissie seems to have taken quite the shine to Rakesh and is pleased when he chooses lunch with her over seeing Priya.

As the reconstruction gets closer, Lawrence pleads with Chrissie to get Rakesh to call it off, but she refuses wanting his innocence to come out.  She can’t bear the thought of him back in prison and wants him released as soon as possible.  As she confides in Rakesh, her emotions get the better of her and she leans in for a kiss.  Will Rakesh reciprocate or will Chrissie be left mortified?

As the day of the reconstruction arrives, Chas steps up to play her part, but what she says contradicts Lawrence.  After making an admission she soon crumbles from the pressure and is taken away by Aaron.

Meanwhile, Adam is looking back through his video for Johnny and is stunned when it implicates Aaron in the shooting.  When he goes to the scrapyard he is dismayed to find the gun exactly where he saw Aaron hide it on the video.  He goes to find Aaron and shows him what was caught on camera and asks him if he shot Robert.  Unfortunately, Victoria is unaware of what’s on the video and uploads it to the internet.

As Adam and Aaron desperately think of how to get rid of the gun, the police are alerted and head to the scrapyard.  Aaron gets to the Woolpack in time to tell Chas about the gun and insists he didn’t shoot Robert just before the police arrive to arrest him.  Diane is furious that Chas has knowingly covered for Aaron and tells her she wants her out of the pub but Chas refuses to leave.

At the police station, Aaron is questioned and reminded that as he’s on license, he will be going back to prison regardless.

As Jai and Kirin prepare for their big meeting with an important buyer, Kirin sees Jai taking cocaine, but is stunned by how great Jai is in the meeting.  He’s torn when Jai offers him some cocaine telling him he’ll feel unstoppable.  Will he take him up on the offer?  Either way, Kirin does a great pitch, but as the pair celebrate Jai doubles over in agony with blood seeping from his nose.

Later, Kirin is relieved when Jai turns up at the factory, telling him that he got a caution for substance abuse.  As he heads to the Woolpack, Priya is unimpressed when Jai appears to be coked up so when he goes to get in his car she calls the police.  Soon the police pull over the car and Jai panics as he has a bag of coke in the car.  He offers Kirin money if he’ll say the coke belongs to him.  Will he take the fall for Jai?

Jimmy is desperate for money and sets Finn up on an impossible bet which sees him drinking a liquefied English Breakfast and wearing a dress.  Aw doesn’t he look purdee!

Andy and Pete bond over Pete’s recent confession and shares with him about his troubled family history.

Eric agrees to Leyla increasing bookings to the B&B, but what he doesn’t realise is that she’s marketing him and his abuse as the star attraction.