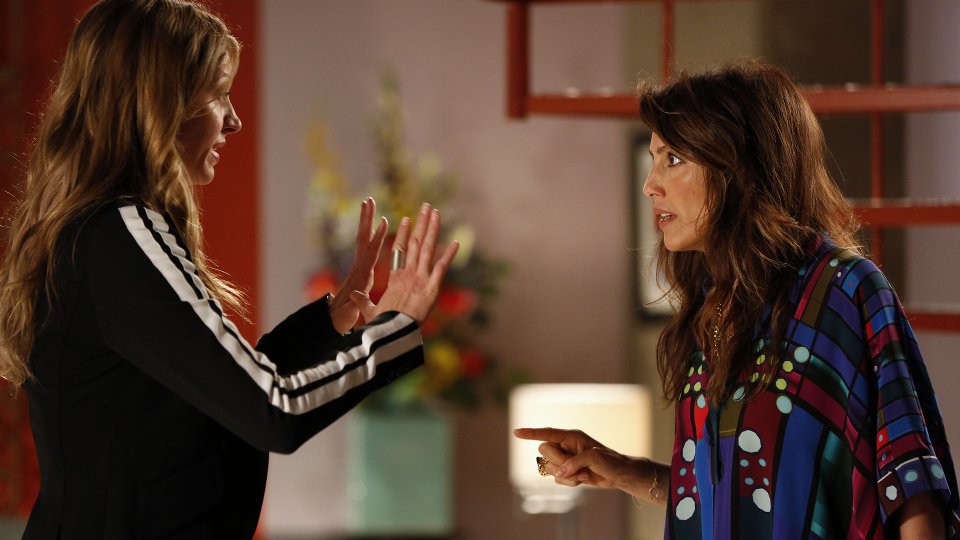 Joss (Jes Macallan) went after Calista (Jennifer Esposito) in a bid to clear her name on the latest episode of Mistresses.

Joss met with a lawyer and had Karen (Yunjin Kim) at her side throughout the disastrous meeting. Karen ushered him out of the apartment and then had a heated exchange with an angry Joss who said she couldn’t afford a lawyer. Karen told her she would take care of things and make sure that she had the best representation she could possibly have.

They had a meeting with another lawyer who was more on the ball. He advised Joss that she had the odds stacked against her because she’d accidentally destroyed evidence on the night of the murder. Karen was impressed with the lawyer and hired him to represent Joss. Harry (Brett Tucker) arrived to see Joss after hearing the news about the murder. Joss gave him the brush off and told him that she knew he’d slept with Niko (Emmanuelle Vaugier).

Joss returned to the police station to be interviewed and her lawyer said he thought there was something off about the questions she was being asked. When she returned home there was a bunch of flowers waiting for Joss from Calista. When she read the note that came with them, Joss exploded and threw the flowers at the wall. She broke down angry at Savi (Alyssa Milano) for abandoning her and Calista for playing games.

The lawyer called Joss to tell her that she’d made herself look like a liar by saying she’d never been in Calista’s basement. The police found Joss’ fingerprints on the door knob and the lawyer advised her to sit tight until he figured out what to do. Karen rushed over to Calista’s house to confront her about what she was doing to Joss and told her to stay away from her.

Karen took food home for Joss and found April there doing Google searches on Calista. Joss suggested that search for Calista’s real name to see what dirt they can find out about her. Joss went to see the mother of Calista’s previous husband who committed suicide and she discovered that the man may have actually been murdered. Joss told the lawyer the information she’d learned and asked if they could use it against Calista.

Calista was interviewed at the police station again and had to go through her dead husband’s mistresses with the detective. She admitted to the detective that she was upset about her husband’s affairs but requested to be allowed to put her life back together if they didn’t have any evidence against her. Calista returned home and told her lawyer that she knew Joss hadn’t committed the murder but the lawyer warned her to stay away from her new friend. On the advice of her lawyer, Calista started to plan her husband’s funeral and ordered some flowers.

News that Joss had put the police in touch with Calista’s ex-mother in law travelled fast leaving Calista furious. She went straight over to see Joss to confront her and was shocked when Joss told her that she knew Calista had killed Luca (Noam Jenkins). Calista went back to see the police and spun a story about Joss insinuating that she had been obsessed with her. She also told the police that Joss had threatened to kill Luca but she didn’t take her seriously.

Based on Calista’s testimony Joss was arrested outside of Karen’s apartment for the murder of Luca. Calista played the wounded widow to the eager paparazzi to improve her image.

Karen started to feel unwell whilst waiting at the police station for Joss and told her that she thought she may be having an anxiety attack. She struggled through the day helping Joss and the next morning she called her priest when she discovered that Joss had left the apartment to chase a lead. Karen went to see her priest to talk about the situation with Joss and he gave her advice telling her to see a doctor. Karen followed the advice and the doctor insisted on doing a pregnancy test. Just when Karen thought life couldn’t be more complicated she found out that she was pregnant with Alec’s (Ed Quinn) baby.

Falling off the wagon

Mark (Rob Mayes) woke up to find an empty bottle of whisky on the floor. April (Rochelle Aytes) noticed something wasn’t right with him but Mark brushed it off as an illness. Mark went to work to pick up his cheque and pleaded with him to work that night but he refused. He returned home and found a bottle of vodka in the freezer when he was looking for something to drink. He checked that no one else was in the house and then he took the bottle. Mark arrived to work drunk and Harry told him to leave.

Mark let himself into Harry’s house and the two men had a confrontation about Mark’s behaviour. Mark told Harry that he did accidentally tell April about Neko and also told him that he was an alcoholic. Harry felt bad as it was him that encouraged him to drink and when Mark tried to leave Harry told him to stay at his house and sleep his hangover off.

April slept with Blair (Brian White) and was surprised to see a photograph of him with his late wife on the wall. Blair went to see April and apologised for the photo on the wall assuring her that he’d moved it. He gave her some flowers and started talking about their future. That night April spoke to Karen and Joss about her first time with Blair and when her enthusiasm was underwhelming the ladies suspected it was a great first experience.

April decided to have a chat with Lucy (Corinne Massiah) about Blair and was shocked when her daughter told her that she didn’t like her new beau. After accidentally soaking herself when she tried to use the tap she thought Mark had fixed, April called Blair for help.