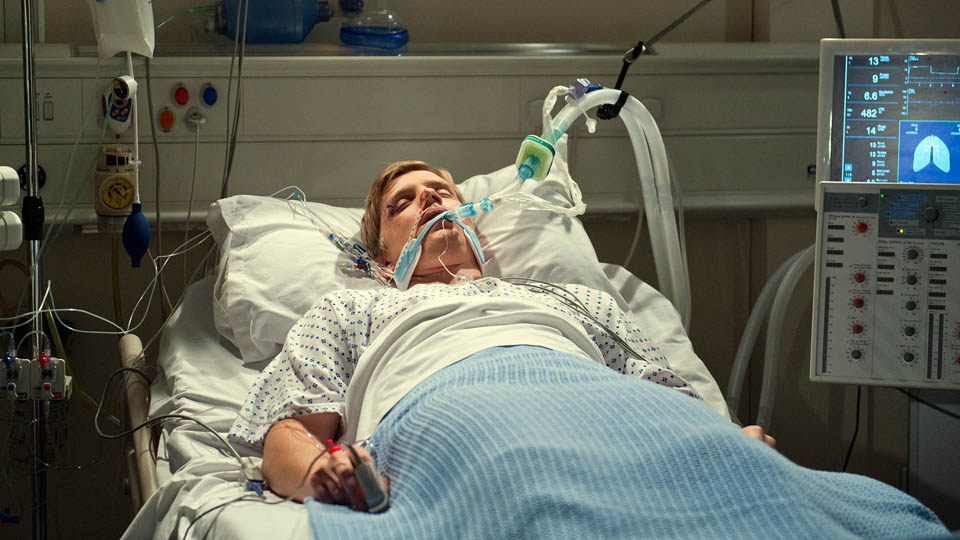 What a dramatic week on Emmerdale we’ve just had.  Robert wound everyone up and someone decided to shoot him, leaving him fighting for his life.  Just who was the shooter?  The police have a number of suspects in the week ahead.  Read on…

The police hunt for Robert’s shooter

The village is in shock at Robert’s shooting and the finger of blame is being pointed in lots of directions as Emmerdale teases us with their latest whodunit.

Diane and Victoria are worried to see that Andy is missing and start to suspect that he may have pulled the trigger.  Chas is terrified that it was Aaron and at Home Farm Chrissie is disturbed that both the gun and her bracelet are missing from the safe.  Lawrence warns both Chrissie and Lachlan to keep schtum about the gun when the police come knocking.  Chrissie doesn’t tell him that Chas already knows about the gun and starts to worry about what she might tell the police.

With suspicions abound, it seems that Andy starts off as the prime suspect with police wanting Sarah’s phone as part of their investigation  Later, Diane and Victoria stand by as the police apprehend a furious Andy and lead him to the police station for questioning.

Marlon notices that Paddy is looking out of sorts and has lied to Rhona about where he was on the night of the shooting.  What is he covering up?

Aaron asks Adam when the scrap is being collected, then heads to the yard to dispose of a gun.  Meanwhile, Chas points the finger at Chrissie who becomes the police’s prime suspect.  She knows that Eric can corroborate her movements the night of the murder, but the way he feels about her, she’s sure he’ll see this as an opportunity to get his revenge.  It seems she’s right as Pollard goes into full on heel mode leaving Lawrence to use all tactics necessary to get Eric to retract his statement.

Lawrence can’t cope with the thought of his daughter enduring a stint in prison like he had to in his past and confesses to the police that he shot Robert.  Chrissie is distraught and asks her dad’s new fiancé Bernice, to come with her to visit Lawrence in prison and make him realise what he’s throwing away, but it backfires when Bernice hands her ring back.

Aaron panics when he realises that the scrap isn’t being collected this week after all leading Chas to give him a warning.  Was it Aaron who shot Robert?

Belle and Kirin get serious

Things are going well for Belle Dingle, as her romance with Kirin seems to be blossoming and the pair discuss taking their relationship further.  Not everyone is happy about it though as Lisa clocks the pair giving each other the eye at the factory and decides to have a chat with Belle.  Belle insists that their relationship is more than just a passing fad and later, her and Kirin take things to the next level.

Lisa ropes in Debbie to talk about safe sex with Belle and she assures Debbie she did take precautions with Kirin.  When she turns down a school trip in favour of staying around for Kirin, is Belle becoming too keen?  Will Kirin like the clingy Belle versus the hard-to-get Belle of late?

When Joanie’s car breaks down, she climbs a wall in an attempt to get phone signal.  Unfortunately, she falls injuring her leg in the process and can’t stand up, leaving little Kyle in the car and unaware to where she is.  Luckily, Zak drives by and comes to the rescue.  The whole event makes Joanie realise just how fragile she is to have such a young child to look after.

Zak is determined to get Cain to recognise Kyle in his life.  Later, when there is a near accident involving Kyle and a car, Cain leaps to Kyle’s defence. Moira takes it as a good sign and she makes it clear she wants to have a relationship with Kyle. Cain is annoyed by the manipulation, but will Cain ever recognise Kyle as his own?

Eric’s behaviour is out of control causing many villagers to lose their patience and David even more concerned.

Rhona worries for Vanessa when she struggles to feed baby Johnny and puts herself down as a mother.

Megan is angry when Leyla refuses to sign the paperwork to wind their wedding business down.  She needs to leave the village before her pregnancy starts to show.

Meanwhile, her baby-daddy Jai, is in a foul mood and coked off his face.