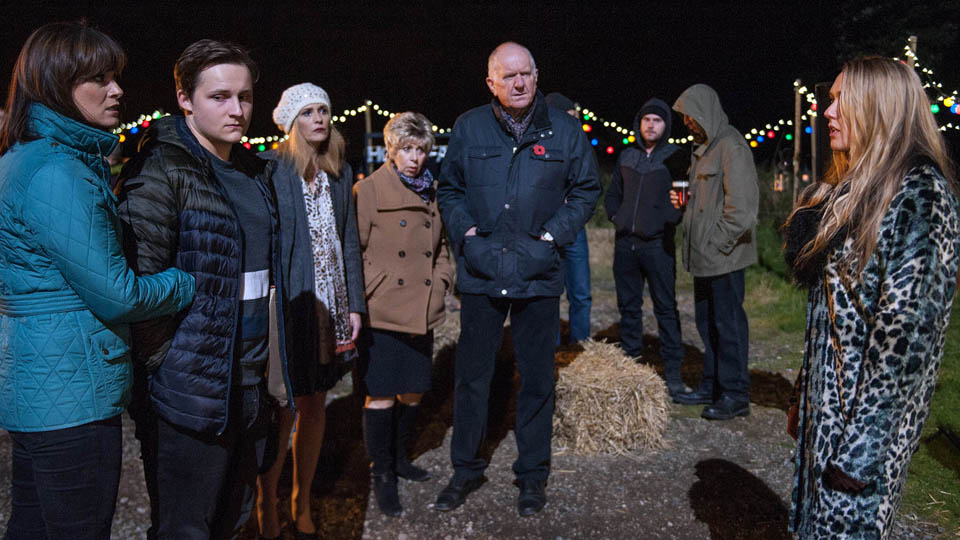 Welcome to our weekly look ahead to what’s going to happen in the Dales this week.  Belle makes a surprise early return, Victoria may be pregnant and Diane is on the warpath.

The net closes on Lachlan

Rebecca tricks Lachlan by telling him that Robert knows there’s evidence he shot Andy and warns him to hide it.  She follows him to the woods as he’s about to retrieve something from the stream, but he’s interrupted by Jimmy and the kids.  She waits for him to leave, ready to pounce on whatever he’s been hiding.

Later, at the Home Farm bonfire event, a distraught Chrissie tries to hide the vase in the fire.  Rebecca suddenly appears, bloodied but alive, and tells everyone how Chrissie knocked her out and how she framed Andy for shooting Lawrence.  Diane Sugden is amongst the gathered crowds and she wants answers.

As the Whites panic when the police start questioning them, Diane is still furious and sees an opportunity when she learns that there’s a PR event at Home Farm adventure playground; she sets up a mini protest outside the gates with placards!  Lawrence asks them to leave.

Could Diane be behind a rock flying through the window at Home Farm and narrowly missing Lachy?  Chrissie certainly thinks so as she serves Doug, Bernice and Diane notice to get out of Brook Cottage that she owns.  She gives them just seven days to get out.

An angry Diane makes things worse for herself when she goes to see Lachlan and he winds her up to the point that she slaps him and he captures it all on his phone.

Belle is back for good

Belle shocks everyone by returning to the village saying she’s back for good and will be staying with Zak at Dale Head.  She’s worried that Lisa will be upset she’s not staying with her, but Zak insists he’s talked to her.  Jermaine and Belle decide to start their relationship from the start again.

Meanwhile, Ameila freaks Kyle out about Belle leaving him fearful of her but when Belle returns and sees how scared he is she is disturbed.  Zak takes it out on the kids and shouts at them for wearing metal hats to stop them hearing the voices.  Belle isn’t pleased at his reaction and they have a confrontation where Belle demands Zak be honest with her and he makes a confession that leads her to move out.

Ross is still struggling with his dad’s death and at Dale View he kisses Victoria who gives him a slap for his troubles.  Later, Ross provokes Adam about Victoria, and she’s the one left on the floor as she tries to keep the pair apart.  She’s clearly in pain and Adam, Finn and Aaron take her to the hospital where a shocked Victoria reveals to Adam that she might be pregnant.

As she goes to give a sample to test whether she is or not, Adam is convinced she can’t be leaving her worried that if she is, he isn’t ready for a baby.

Kerry sees an opportunity at work and saves Jai’s bacon by bringing contracts he left behind to The Woolpack.  With the client taking a shine to Kerry and the booze flowing, will Kerry seal the deal for Jai or has she bitten off more than she can chew? (no sweet pun intended!)

As Megan struggles with a work crisis, is Frank the galant knight to save the day and look after Eliza?

Nicola has a panic attack when the kids are near the fire and she realises she’s useless to stop anything happening to them.  Rishi and Rakesh offer her compensation and Jimmy persuades her to have a spa break on her own.  How will she cope?

Aaron sees Finn at the hospital and learns that he’s been visiting Kasim.  Aaron warns Finn that he should leave the guy alone as he knows nothing about him, seeing shades of Jackson in the situation.  Will Finn take the advice?