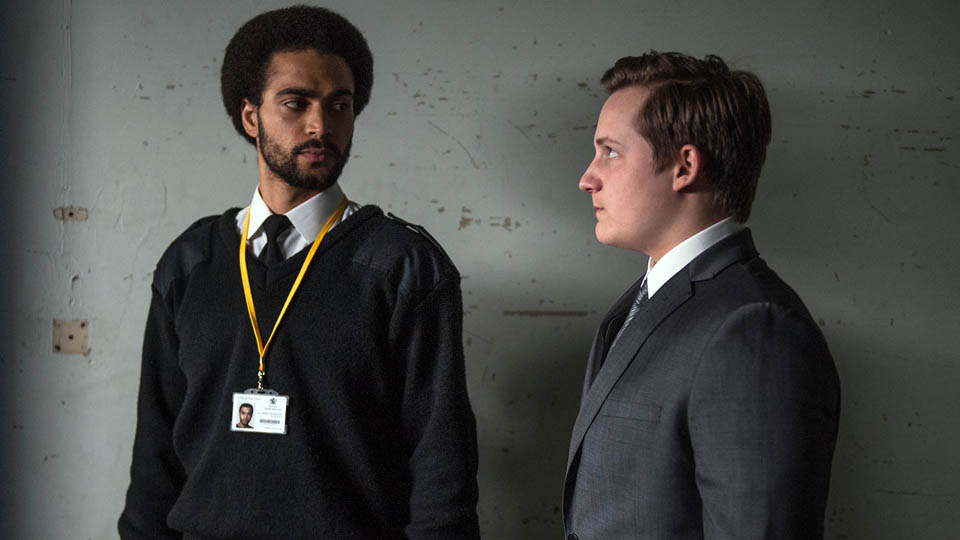 It’s another busy week in Emmerdale including an hour long episode on Tuesday night.  Conniving Emma is stirring more trouble with Moira and Cain, Rebecca wants Robert to break Lachlan out of prison and Jimmy is in trouble with Nicola.

Rebecca is realising that their bond is stronger than she’d like as Lawrence stands up for Chrissie in an argument they are having over Lachlan’s situation.  She goes to see Robert and tells him that they have to break Lachlan out of prison, threatening to tell Aaron about their kiss if he won’t help her.  At court, she puts her plan into action by stealing a security pass which she gives to a very reluctant Robert as she heads off to start a fire and get the alarms going.  As Lachlan is about to deliver his plea the fire alarm goes off.  Waiting in the corridors beneath the courtroom, Robert gets a call from Aaron and is conflicted about whether he can go through with busting Lachlan out or not.

Later, Chrissie is feeling the pressure to choose between her family and Robert and goes to visit the latter.  Robert dismisses here and tells her they’ve nothing to talk about and in spite, she tells Aaron that Robert kissed her.  How will Aaron respond?

Cain has to physically remove Emma from Holly’s bedroom when he finds her in there and thinks she’s up to no good.  However, Moira had asked her to pack up Holly’s clothes and is furious at Cain’s interfering;  one nil to Emma!    For her next trick Emma convinces Moira that as long as Cain’s caravan is outside, she’s a prisoner in her own home, but what will Moira do about it?

Later, Cain leaves a takeaway for Moira with a note, but it’s Emma who finds it first and she hides the note and pretends she got it for Moira instead.  Meanwhile, Cain tells Belle he’s written Moira a note and she tells him that Moira will definitely call, yet when he’s later confronted by Moira, he’s left humiliated.

Lawrence declares his love for Ronnie

Lawrence has an embarrassing moment at the beginning of the week involving Ronnie and is left paranoid that everyone is talking about him.  He insists that he was drunk not realising that Ronnie has heard him.  Ronnie tells Rebecca about what he heard and says that Lawrence will never change, but she heads back to Home Farm convinced she can get through to her dad.

She schemes so that Ronnie’s van breaks down and then Lawrence turns up and asks to talk to him in the café.  Ronnie agrees and is soon shocked when Lawrence loudly admits that he loves him and doesn’t care who hears.  Will Ronnie feel the same way or has too much happened in recent times?

Nicola catches Jimmy in a hotel with Bernice

Jimmy has managed to set the bacon on fire and luckily Bernice arrives to help him put it out.  Seeing his exhaustion, she insists on booking him into the B&B to get some sleep.  When Nicola gets home and smells the smoke, she’s annoyed to discover what had happened and that Bernice had been there.

Jimmy later lies to Nicola that he has an overnight drive to Newquay when secretly Bernice has booked him into a spa hotel.  However, when he arrives at the hotel, he’s not able to check in on his own so he calls Bernice who then has to show up and pretend to be his wife.  Too tired to argue, Jimmy goes along with it all and they head up to the room.

Meanwhile, Nicola gets an email on Jimmy’s account from the hotel and is more than suspicious as she makes her way to the spa.  Upon arriving at his bedroom, Nicola has a go at Jimmy for lying to her but is soon sweet talked by him…until she spots the wardrobe that is!

It looks like Frank’s lies have caught up with him when Tracy and David urge him to go to the police over his mugging.  Will he tell his daughters what really happened or the police for that matter?

Charity’s moaning about him and Aaron always fighting gives Robert an idea that they need to move and when he sees Mill being auctioned off he wants to take Liv’s offer to chip in for a place.  Will Aaron be so keen?

Finn goes to visit Kasim in hospital and pretends to the nurse he’s his boyfriend.  He’s excited and nervous when he learns they are going to bring Kasim out of his coma but when he arrests as he’s brought round, Finn can’t handle it.  He calls Aaron who reassures him, but when he sees Kasim being whisked off down the corridor he fears the worst.

Marlon and Carly tell April they’ll all spend Christmas together and that Carly may move in with them one day.

Belle has a big decision to make when Bailey gets a job offer in America.  Will she want a fresh start over there with him or does she want to stay in the Dales?