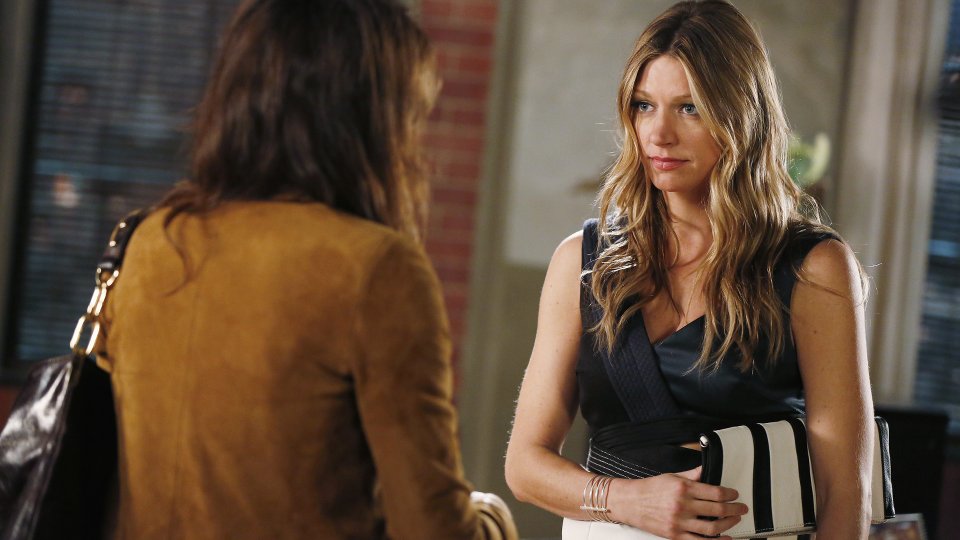 Joss (Jes Macallan) offered to do Calista (Jennifer Esposito) a favour we’re fairly sure she’ll be regretting during tonight’s Mistresses.

Harry (Brett Tucker) reeled after the revelation that Niko (Emmanuelle Vaugier) was Ellis’ (Kavan Smith) mistress. He was even more furious when she revealed that she’d slept with him to get back at Ellis because she knew it would rattle him. Harry worried about his career and Niko told him that everyone knew what they’d done. When Harry arrived to work he found out that Niko hadn’t been lying and he spoke to Mark (Rob Mayes) about his worries that Ellis could end his career. Mark told Harry he needed to get an agent so he could brand himself to protect his job and his future.

Harry went for a meeting with talent agent Ari (Carmel Amit) and her brash attitude was a little bit hard for him to deal with. She kept asking questions and he eventually peaked her interest. Following the meeting Harry looked up his competition and realised that he needed to put his name to a product to raise his profile. Mark suggested that Harry teach a cooking class as a starting point.

The cooking class took place later that day and Harry started to win Ari over. The class went really well and Ari told Harry that she wanted to take him on as a client.

April’s (Rochelle Aytes) mother was in town this week and it didn’t take Marjorie (Lynn Whitfield) long to rattle her. After going to work, April sounded off to Karen (Yunjin Kim) about her mother and tried to convince Karen to come over with her lovers. April felt left out when Lucy (Corinne Massiah) bonded with her grandmother and promised her daughter that she could skip school the next day if she did all of her homework. Marjorie tried to connect with April but it was very strained and neither really knew what to say to each other.

The next morning April searched through her mother’s bag for alcohol and was caught by Mark. She found nothing and was interrupted by Marjorie and Lucy coming down the stairs ready for their day out. During lunch April bit her tongue whilst her mother continued to bond with Lucy. When they returned home, April discovered that Lucy had skipped a test at school without telling her and sent her to her room. When Marjorie tried to give April parenting advice, April didn’t react very well and brought up an incident from the past when Marjorie drove drunk with Lucy in the car. Marjorie denied that she had a drinking problem and April told her that she didn’t want her in the house any longer.

Lucy overheard the argument and asked April why she didn’t just tell her why she didn’t get along with her mother. April had a heart-to-heart with Mark and he told her that she was right with her original gut not to listen to Blair (Brian White) before she changed her mind and invited her mother over. Mark revealed that he’d found Marjorie’s alcohol stash after she left.

What’s a girl to do?

Karen felt weird around Alec (Ed Quinn) when Vivian (Sonja Bennett) had to go out of town to be with her sister who was in labour. Alec arranged dinner plans with Karen but she couldn’t help but feel that she was doing something wrong. Karen turned to April for advice but didn’t get far as April admitted that she didn’t really have any advice to give. Karen cancelled dinner with Alec and dodged all of his attempts to make alternate arrangements with her.

Alec arrived at Karen’s door with lunch and asked if she was avoiding him. She admitted that she was but let him in when the lunch he brought started leaking. Alec suggested that avoiding each other wasn’t the answer whilst Vivian was out of town. Over lunch Karen and Alec got to know each other better and talked about their pasts. Their date was interrupted by a call from Vivian and Alec lied to his wife about his whereabouts.

That night during work Karen bumped into Alec and the two couldn’t resist their attraction to each other. They ended up having sex in a supply closet. After the deed Karen asked Alec if they should tell Vivian what happened and neither of them knew what to do.

Joss arrived at Calista’s house whilst her friend/boss was in the midst of an argument with Luca (Noam Jenkins). After trying to get evidence that he was cheating on her, Luca turned the tables by proving that she had been cheating on him. Calista exploded and Joss had to try and calm her down. In an attempt to try and help Calista, Joss suggested that they set Luca up to cheat with her so she finally had her proof. Calista was reluctant to begin with but Joss eventually won her over.

The two women staged an argument so that Luca would think they were on the outs. He overheard everything and played right into Joss’ plan. Joss gloated to Calista about the success of their plan and was surprised when her friend reacted emotionally. Calista continued with the plan and hired a man to install cameras in the bedroom to catch Luca in action.

Calista pretended to leave for New York and Joss’s nerves started to get the better of her as she prepared for the evening. Karen told her what she was doing was a bad idea but Joss wouldn’t listen to her. Calista stopped by to thank Joss for helping her catch Luca and headed off to meet him.

Joss arrived at the house and was greeted by Luca. They talked about Calista falling out with her before Joss moved things to the bedroom and they started to get intimate. After she thought the camera had picked up enough footage she went to the bathroom and text Calista. She got no response and the power went out. Luca went to investigate and Joss went to find him. Joss made her way down the stairs and found Luca’s body at the bottom covered in blood.