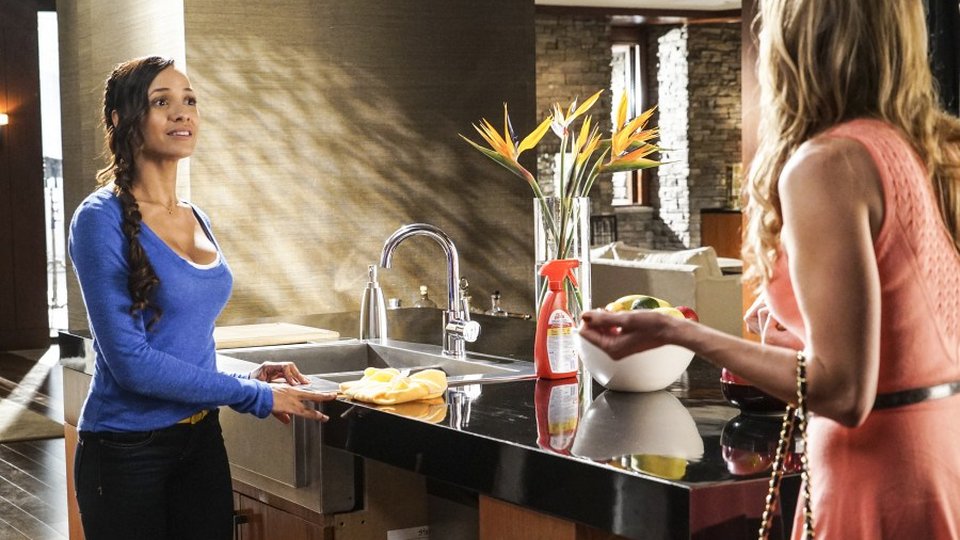 Carmen (Roselyn Sanchez) saw her actions come back to bite her in the behind on this week’s Devious Maids.

Carmen made an appearance on a talk show to promote her new album this week but prior to the show she realised that she’d lost her phone. Sebastien (Gilles Marini) told her that the last text she sent him was while she was at his house with Jacklyn (Michelle Hurd). Carmen worried that Jacklyn had the phone so she went to see her and lied that she’d asked Sebastien to be her retailer and that’s why he was calling her. Jacklyn seemingly accepted the lie as truth and Carmen told Sebastien they had to stop seeing each other until she released her album.

During her talk show appearance, Carmen was humiliated when Jacklyn switched out her music video for a sex tape featuring her and Sebastien. Carmen was devastated and Jacklyn got her revenge. In tears, Carmen told Sebastien their relationship was a mistake and told him they had to break up. Carmen tried to apologise and make amends with Jacklyn but was furious when she found out her boss planned to shelve her album indefinitely top purposely stall her career.

Evelyn (Rebecca Wisocky) asked Adrian (Tom Irwin) to look after Deion (Isaac Ryan Brown) for the day whilst she ran errands. Adrian didn’t want to be lumbered with the boy and tried to pass him off on Carmen but Evelyn told him he didn’t have a choice in the matter. Evelyn went to the adoption agency and was alarmed when the woman she was previously dealing with was no longer her case-worker. Instead she got a ball-buster who wanted to do a house visit and interview Adrian. Evelyn tried to lie her way out of the appointment but she failed.

Adrian took Deon to the Country Club and their banter was pretty fractious. He changed his tune when one of the Country Club employees gave him lunch on the house after being impressed that Adrian was fostering a child. Adrian soon realised the advantage of having a child when people fawned over him and fell over backwards to accommodate them.

Evelyn called Adrian to tell him about the visit and he assured her that he would clear his plans to accommodate it. Olivia (Valerie Mahaffey) arrived to meet her for lunch and suggested that Evelyn drug Adrian to make sure he doesn’t say anything he shouldn’t during the meeting with the adoption agency. Evelyn slipped the drugs into Adrian’s drink but it was accidentally drunk by the case worker. The interview then took a hilarious turn as the drugged out case worker behaved oddly then passed out on the sofa. When she woke up Evelyn and Adrian used her behaviour as a negotiation tactic so they could keep Deion.

Rosie (Dania Ramirez) continued to explore her theory that Taylor (Brianna Brown) was having an affair. When Taylor came home from ‘the gym’ Rosie guessed that she was sleeping with her gym trainer. Rosie shared her suspicions with the other ladies but Marisol wasn’t convinced that her theory was right although she admitted that Michael (Brett Cullen) suspected Taylor was having an affair. Carmen shared the fact that Blanca (Naya Rivera) had told her she thought something was going on in the Stappord house before she was murdered. Rosie insisted that whoever was Taylor’s lover was the person behind the murders.

The next time Taylor went ‘to the gym’ Rosie followed her and saw her chatting with Spence (Grant Show) in the park. She witnessed Taylor slap him and assumed that Spence was Taylor’s lover. Rosie confronted Spence and accused him of sleeping with Taylor whilst they were still together. Spence pointed out that it was Rosie who walked out on him and she slapped him. Taylor spoke to Rosie and explained that Spence was her sponsor and they’d been leaning on each other through her recovery. Rosie apologised to Spence and the two shared a moment.

We are never getting back together

Marisol (Ana Ortiz) tried to appeal to Jesse (Nathan Owens) to rekindle their relationship but he wasn’t ready to get back together with her. Instead he asked if Marisol could help him out with a job application and she agreed but instantly put her foot in it again with a poor choice of words. When she arrived home, Marisol was shocked to see Olivia standing in her house. Worried that Olivia was still unstable, Marisol tread lightly around her and Olivia admitted she was fine now and there to get her reference for Jesse. Marisol was alarmed that Jesse was considering working for her and she told Olivia that she didn’t think they would be a good fit for each other.

Jesse was furious when he didn’t get the job working for Olivia and made it clear that he wasn’t getting back together with Marisol EVER. Marisol went to see Olivia and convinced her to hire Jesse as her maid to try and get back in his good books. Olivia revealed that she was seeing Michael again but Marisol wasn’t sure that she was being told the truth. Marisol was then shocked when Olivia said Blanca was murdered…

Marisol shared the information from Olivia with Rosie and they thought that maybe she was the murderer and that she had an accomplice. Olivia was then seen talking to someone on the phone saying their plan was working and then she shaved all of her hair off.

Zoila (Judy Reyes) took tips from Joy () to try and impress Dr. Neff (John O’Hurley) after getting off on the wrong foot with him. Unfortunately everything that Zoila did, Joy one-upped. Zoila’s competitive nature came out and she got into a cleaning war with Joy but still failed to gain the upper hand…that is until Joy knocked over the vase containing Dr. Neff’s mother’s ashes. Zoila came to the rescue and filled it with dust from the vacuum but Dr. Neff realised something had happened. As Joy was about to come clean, Zoila took the blame incurring the wrath of Dr. Neff. The good doctor then asked Joy to help him get rid of Zoila.