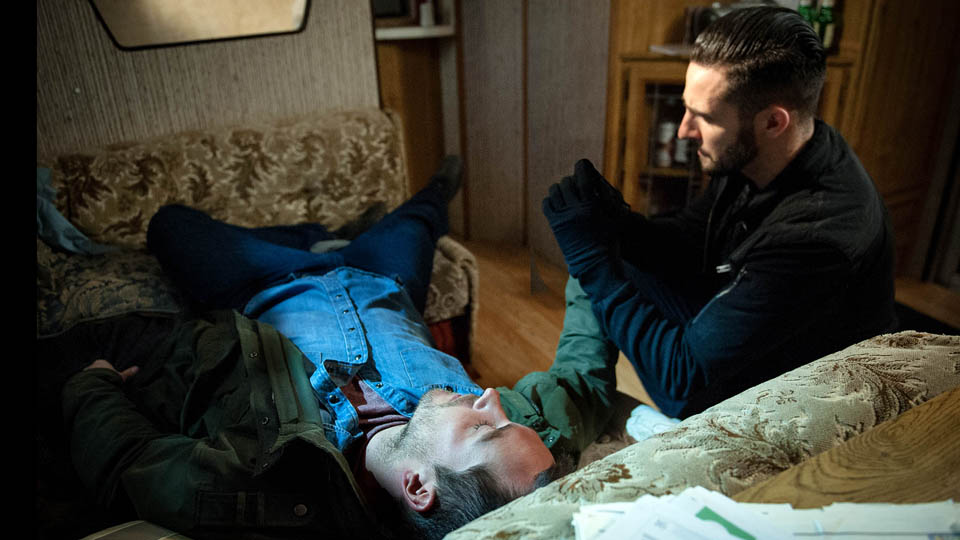 Last week we said an emotional goodbye to Alicia and Jacob and this week it looks like we could be saying goodbye to another resident.  Read on…

Ross sets out to get revenge on Pete

Ross continues to make out that he’s worried about his brother, Pete’s depression and has to hide his irritation when he sees him with Debbie and the kids.  As a parcel arrives at the cottage, Ross is clearly up to something as he can’t get Emma out of the house quick enough.

Later, a suspicious Emma checks Ross’ laptop and is pleased to see he’s been searching how to help with depression and believes he is genuine in his support for Pete.  Ross suggests that they all go to the pub, where he plies Pete with shots to get him more and more drunk.

When Pete arrives back at the caravan he opens the door and falls on the floor in a drunken heap.  Ross steps in behind him and lifts him on to the bed before closing the door.  He then takes out a gun and a faked suicide note (that he’d written earlier) and stands over a drunken Pete carefully placing the gun.  He aims the gun and is set to the pull the trigger, but will he go through with it?

Debbie is keen for Pete not to see the kids again after letting him tell them he won’t be a part of their lives.  Sarah has developed a cough and Debbie takes her to the doctors to get her checked out.  Emma is angry when she learns that Debbie doesn’t want Pete near Sarah or Jack from now on and seizes an opportunity for revenge at the doctor’s surgery.  Debbie is unimpressed when Emma shows up to take the necessary samples and it’s not long before the two clash.

Emma is fuming at what Debbie says so when she sees Sarah’s results come back in, she sets about seeking her revenge.

As Debbie worries about Sarah’s health, she finds comfort in the arms of Ross, who spends the night with her much to the shock of Finn, Emma and James.  Later Andy and Debbie go to the hospital to get Sarah’s results.

Last week saw Vanessa give birth to baby Johnny, supported by Kirin for most of the delivery until Adam turned up to take over.  Priya is putting pressure on Rakesh to come clean about the baby actually being Kirin’s, but he’s stubbornly refusing.

As baby Johnny remains in intensive care, Vanessa’s emotions are shot and she takes it out on Adam when he tries to put a positive spin on the situation.  Ashley suggests baptising him which in turn makes Adam’s anger flare as he refuses to deal with the reality that Johnny might not make it.  However, when Johnny is rushed off for urgent treatment, Adam realises maybe a baptism wouldn’t be a bad thing after all.  Vanessa is still blaming herself for the early birth and is nowhere to be found.

Meanwhile, Kirin is convinced Vanessa won’t have time in her life for him and wastes no time in moving on to Belle.  Although he initially rejected her when she went in for a kiss, her maturity towards that situation and her new found business acumen clearly have impressed him as he suggests they go out on a date.

David is shocked to learn that Eric has asked Paddy to put down Cheryl the dog.

Laurel makes plans to move out of Marlon’s as they start their divorce proceedings.  As Diane comforts Marlon, she also gives him an idea for child care help – Carly.

Chrissie goes to court over the helicopter disaster that killed Val and Ruby.  She plans to plead guilty, but Robert forces her to talk to Rakesh and reconsider.  How will she plead?

Rodney and Jimmy may have gotten themselves into a bit of a situation.