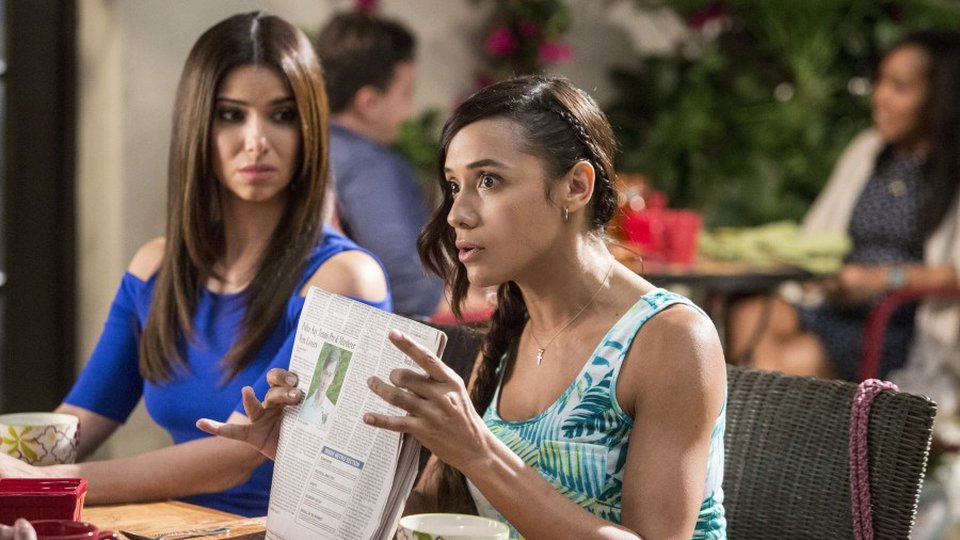 News of Blanca’s (Naya Rivera) death caused the maids to suspect foul play in the latest episode of Devious Maids.

Did Blanca do it?

News of Blanca’s death began to circulate and she was blamed for the murder of Louie Becker (Eddie Mills). The ladies got together for coffee to talk about Blanca’s death and Rosie (Dania Ramirez) suggested that Blanca had been framed. Marisol (Ana Ortiz) tried to shut down Rosie’s speculation but all of the women agreed that they didn’t think Blanca could have murdered anyone.

Rosie used her position in the Stappord house to try and find out what had really happened to Blanca. She comforted a distraught Taylor (Brianna Brown) before sharing her concerns with Michael (Brett Cullen) and giving him Blanca’s necklace. Michael confronted Taylor about Blanca’s necklace but she wouldn’t say anything about what she knew.

As Michael kept pushing her, Taylor refused to tell him any more about what she knew and told him to decide if he was going to stand by her or not. Michael chose to leave her and she broke down to Rosie.

After breathing a sigh of relief that Reina (Justina Machado) had been sent packing, Zoila (Judy Reyes) was annoyed to discover that Dr. Neff (Edward O’Hurley) would be moving into the house. Zoila was even less happy when she couldn’t sleep that night due to Dr. Neff shouting ‘ooo la la’ during sex with Genevieve. The next morning Zoila confronted Genevieve about it and rather than being embarrassed about it, Genevieve asked for feedback on her performance. Zoila refocused her on the issue and discovered that Genevieve didn’t like Dr. Neff’s ‘ooo la las’ either.

Despite being told not to mention anything, Zoila couldn’t help herself when Dr. Neff kept saying ‘ooo la la’ whilst eating soup she’d made. Zoila spilled the beans and told him that Genevieve isn’t a fan of his enthusiastic phrase either. The news upset him and later Zoila heard Dr. Neff arguing with Genevieve about telling her maid personal details about their relationship.

Genevieve was outraged that Dr. Neff had said she was too close to Zoila but was left surprised when Zoila agreed that it may be time for her to move out of the house so they can have some privacy.

Carmen (Roselyn Sanchez) tried to ignore Sebastien’s (Gilles Marini) calls as she was meeting with his wife Jacklyn (Michelle Hurd). After discussing Carmen’s upcoming album, Jacklyn overheard Carmen speaking to Sebastien on the phone but assumed it was her boyfriend. Carmen lied to cover it up and Jacklyn suggested that they go on a double date so Carmen can meet her husband. Quick-thinking Carmen spoke to Sebastien about it and then found a date in the shape of her admirer at the coffee shop she frequents.

Predictably Carmen’s double date went badly. Carmen was impressed that her fake date was genuinely a fan of hers whilst Jacklyn was less than impressed that Sebastien was flirting with the waitress. After the date Carmen argued with Sebastien about the things he told her about Jacklyn and the way he behaved on the double date.

Carmen went to see Jacklyn to tell her that she deserves someone better than Sebastien. Her intentions were completely misunderstood when Jacklyn kissed her. Another fine mess for Carmen to clean up…

Marisol told Jesse (Nathan Owens) that she had a meeting with a potential new client that could put a lot of work her way. During the meeting the new client made advances towards Marisol and even though she had it under control, Jesse lost his temper and threw the man out. Marisol was shocked at Jesse’s behaviour and his lack of realising that he’d done anything wrong. She turned to Carmen for advice but didn’t really get the help she was looking for when Carmen admitted she thought Jesse’s behaviour was ‘hot’.

At dinner that night Marisol spoke to Jesse about his temper and told him that she wasn’t impressed with his behaviour. No sooner had she spoken, someone started to hit on Jesse in front of her. As the woman got friskier Marisol lost her cool and shoved the women into a table. When they arrived home Marisol tried to shrug off her behaviour before explaining to Jesse that she had a poor history when it came to picking the right men.

Ernesto (Cristian de la Fuente) found his past catching up with him when Hector (Antonio Jaramillio) warned him that the Cartel wanted him back. When Ernesto refused Hector intimated that the Cartel won’t take no for an answer and threatened Rosie. During a coffee date with Rosie, Ernesto was alarmed to see Hector who dropped by to ensure that Ernesto knew that the Cartel was serious. Ernesto hurried Rosie home worried about her safety. Back at Ernesto’s apartment he tried to tell Rosie she couldn’t work for the Stappords or leave his apartment but she told him she was her own woman.

As he continued to worry for Rosie’s safety, Ernesto stalked around the outside of the Stappord house and was beaten to the ground by Michael. The Stappords brought Ernesto into the house and they warned Rosie that her husband had to stay away from them. Whilst in the house, Ernesto saw Katy (Grecia Merino) and it seemed like the two knew each other.

In the episode’s final moments Ernesto told Hector that he knew where the little girl their boss was looking for lived. How does Ernesto know Katy?