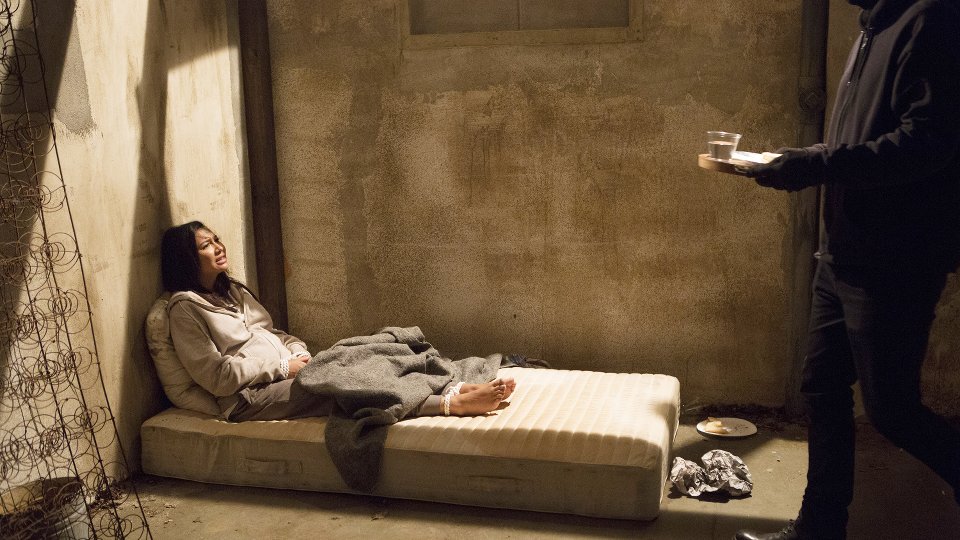 The mystery of Blanca’s (Naya Rivera) whereabouts was solved in tonight’s shocking episode of Devious Maids.

Zoila (Judy Reyes) instantly regretted allowing her sister Reina (Justina Machado) to stay at Genevieve’s (Susan Lucci) house. After arriving home from shopping Zoila called for Reina and got no help. She found her sister making out with the delivery guy on the kitchen counter. After a heated discuss with Reina, Zoila called Genevieve’s hotel in Greece requesting that she come home due to an emergency.

Genevieve arrived home and Zoila laid it on thick about her accident. It wasn’t long until Reina made herself know leading Genevieve to realise that Zoila hadn’t called her home to look after her but to get rid of her sister. Genevieve took Reina out for lunch to try and persuade her to leave but Reina manipulated her by making up lies about things Zoila had said. Reina’s plan worked and Genevieve fell for her act. When Reina was still hanging about, Zoila appealed to Genevieve to get rid of her but she refused.

Moving on to the next stage of her plan, Zoila apologised to Reina for the way she’d treated her and misled her into thinking she was going to take her for a swanky meal. She clarified she was actually taking Genevieve out instead. When Zoila and Genevieve returned home from dinner they found Reina romping with a naked man in the living room. Genevieve realised Zoila had been right all along and threw Reina out.

Rosie (Dania Ramirez) went to see Ernesto (Cristian de la Fuente) to tell him that she had broken up with Spence (Grant Show). He used the opportunity to try and get Rosie and Miguel (Alejandro Vera) to move in with him. She refused explaining that she’s working for the Stappords but she did agree to go on a date with him.

Returning to the Stappords Rosie tried to get to know Katy (Grecia Merino) and when they played a game, Rosie realised that Katy was actually from Mexico not from Argentina as Taylor (Brianna Brown) had claimed. When Rosie quizzed Katy, the little girl clammed up and wouldn’t play any more. At coffee with the other maids, Rosie shared her suspicions about Katy and was upset when Carmen called her stupid.

Rosie had dinner with Ernesto and she shared her concern that her friends thought she was dumb. Ernesto assured her that she’s not stupid and told her she had a big caring heart. His smooth talking resulted in a passionate kiss and the rekindling of some old flames.

Refusing to give up on her suspicions, Rosie gave Katy a Mexican lollipop and in return Katy gave her Blanca’s necklace. Katy admitted that she found it on the floor in the hallway.

Marisol (Ana Ortiz) and Jesse (Nathan Owens) found it hard to separate their personal and professional lives. The two keep ending up in bed together and during a conversation Marisol mentioned that she had a fundraiser to attend. Jesse asked if he could go with her and Marisol wasn’t sure what to say. When Jesse told her he wanted more than sex, he made Marisol accept his offer to accompany her.

After arriving at the fundraiser, Marisol had an awkward run in with Gail (Julie Claire) who couldn’t keep her bitchy comments to herself. Gail then suggested to a friend that Marisol was paying Jesse for more than just his cleaning services. The next day Marisol received a visit from Gail’s friend who asked her to find a male maid for her that would clean and pleasure her. Marisol was outraged by the suggestion that she was selling men for sex and spoke to Gail to have it out with her. After some clever word play from Gail, Marisol realised how it looks for her to be dating her maid.

Marisol spoke to Jesse about the situation and fired him. She told him they had to not work together if they wanted their relationship to work.

Evelyn (Rebecca Wisocky) started the process to adopt a child and was surprised when she was told she couldn’t just pick a child and take it home. When she arrived home, Evelyn called Sebastien (Gilles Marini) to ask him to look for a house fit for a child and was overheard by Carmen (Roselyn Sanchez) who tried to talk her out of it. During the conversation Carmen mentioned that Zoila was pregnant giving Evelyn a dastardly idea.

Evelyn went to visit Zoila and arrived with a gift. She then offered to buy Zoila’s baby from her and was disappointed when the offer was refused. Evelyn left abruptly and took her gift back on her way out of the door. The determined Mrs P. went back to the adoption agency and offered to pay a large sum of money for her application to be processed quickly.

The piggy in the middle

Carmen continued to be frustrated with Sebastien after he told her he had a plan to leave his wife but wouldn’t share the details with her. That night Carmen played a showcase to a mostly empty bar and during mid moan to the bartender she almost failed to notice a record label executive who was trying to get her attention. The next day Carmen had a meeting at the record label that was interested in signing her and was shocked to find out it was Sebastien’s wife Jacklyn (Michelle Hurd). The revelation left Carmen confused about what to do and she told Sebastien she wasn’t going to sign the deal. Sebastien admitted he set it all up so that Carmen would be discovered and they could live off her money. Carmen met with Jacklyn and turned down the deal but soon changed her mind when Jacklyn baited her.

We found out where Blanca has been this week. The poor maid was being held in the basement of a vacant house with a mystery person taking basic care of her. She tried to escape but was caught as she almost made it out of the house. As the episode drew to a close, Blanca was found hung from the ceiling by Sebastien and Evelyn, with the words ‘forgive me’ written on the floor in lipstick.