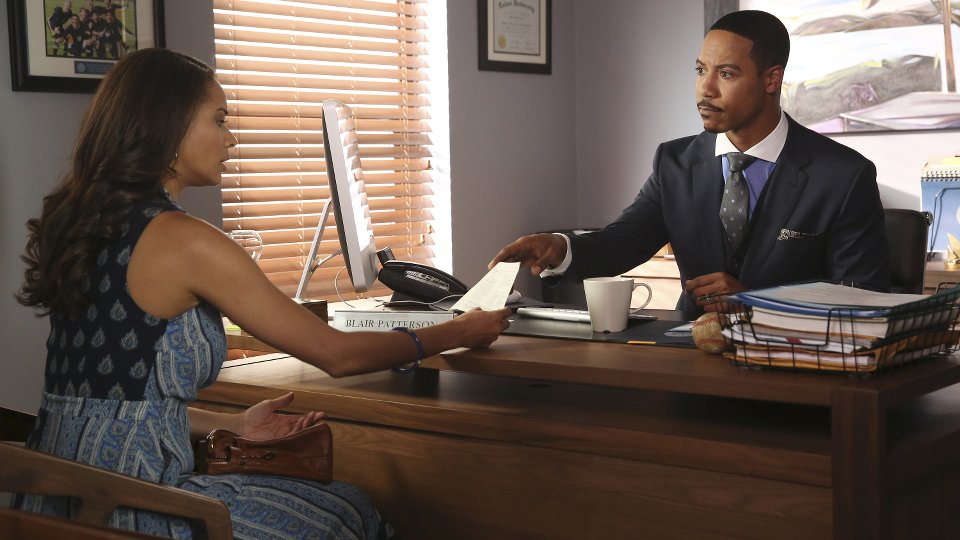 Karen (Yunjin Kim), dived deeper into her latest situation as the biggest hot mess of the Mistresses.

If you haven’t seen the latest episode of Mistresses and don’t want any spoilers we suggest you stop reading now. If you have seen it and want to relive all of the action then keep reading.

Karen Karen, Karen! Where on earth do we start this week? Vivian (Sonja Bennett) arrived on her new friends’ doorstep and confided that she believed Alec (Ed Quinn) was having an affair. Karen quickly pointed out that he was actually looking after her on the day that roused Vivian’s suspicions leading Vivian to quickly leave. After a little bit of soul searching, and advice from April (Rochelle Aytes), Karen realised that she may not have read the situation with Alec properly. Karen bumped into Alec at work and things were a bit awkward, especially when he got a little bit touchy feely.

Determined to fix the issue Karen went round to see Vivian and told her that she wasn’t having an affair with Alec. Karen probed into Vivian’s private life and discovered that Alec and Vivian weren’t intimate any more, which was a frustration for Vivian. Karen lent Vivian one of her dresses and Vivian freaked out saying she felt fake and revealed that she doesn’t find herself attractive any more. Thinking she was helping, Karen told Vivian she would help bring her sexiness out and the two headed back to Vivian and Alec’s house.

As Karen was helping Vivian look sexy for Alec, the two women shared a few joints. Vivian admitted she thought that Karen was pushing her and Alec together because she was worried she may pull them apart. Alec arrived home late and walked through the door just as Vivian was about to make a move on Karen after telling her she was turned on by the thought that Karen found Alec attractive. When Alec didn’t notice the way Vivian was dressed, she went over to Karen and kissed her passionately. Alec’s interest turned to his wife and they started to kiss. Karen tried to leave but Vivian grabbed her arm and asked her to stay inviting her into a saucy threesome.

Calista (Jennifer Esposito) continued fighting with her husband Luca (Noam Jenkins) as she feared he was cheating on her again. Following a fierce fight, Luca tried to reassure Calista that he wasn’t cheating on her and invited her out for dinner to celebrate their 10-year wedding anniversary. Reluctantly she agreed and during dinner Luca wheeled out his new business idea, which Calista realised was the reason he asked her out in the first place. She stormed out of the restaurant, went home and packed his bags. Luca returned home and the two got engaged in another row that took a passionate turn into the bedroom. After they’d had sex, Luca told Calista that he wanted to start over.

After finally having sex with Harry (Brett Tucker), Joss (Jes Macallan) was dismayed when her new beau labelled their relationship status as ‘happy’. She turned to her friends for advice and told them he was the one but was worried that Harry was starting to have doubts about their relationship. Joss went to see Harry at work and when he mentioned he was looking for a new place to live, she suggested that they move in together.

Joss called in a favour with a real estate agent friend to get a viewing on a hot property. After viewing the house, Harry admitted he wasn’t keen on it causing a row with Joss. Harry asked if they could keep looking, which made Joss worry once again that he was having doubts about being with her. Later that day Joss went to see Harry at work again and he wasn’t impressed that she’d interrupted him to show him more houses. The two argued about their relationship and Joss left after the subject of Savi was brought up.

April met Lucy’s (Corinne Massiah) headteacher Blair (Brian J. White) and was shocked to find out that her daughter was struggling to keep her grades up. She also discovered that Lucy had been forging her signature on permission slips leading April to confide in the hot headteacher that Lucy’s father had recently died. Blair suggested that April let Lucy go on a camping weekend and April promised to think about it. April agreed to sent Lucy to camp and decided to accompany her. What she got in return was a very ungrateful and rude reception with Lucy storming off and leaving her to put up the tent (badly!).

After she finished it, April went looking for Lucy and fell over when she saw a shirtless Blair in the woods. As he assessed her injuries, Blair explained that April may be suffocating her daughter and revealed that he was no longer married. Blair helped April back up to the camp and they quickly discovered Lucy had gone missing with a friend. When they found her, April was shocked to hear that Lucy had been smoking cigarettes. She served up a dose of discipline leaving Lucy shocked and Blair seemingly impressed.

Mark (Rob Mayes) and Harry hit it off during Mark’s job interview. After wowing Harry with his mixology skills, Mark was hired after Niko (Emmanuelle Vaugier) gave her seal of approval. Can anyone else see Mark slipping back to his old alcoholic ways?

Tune in to TLC at 9pm on Wednesday to see the next episode of the season.